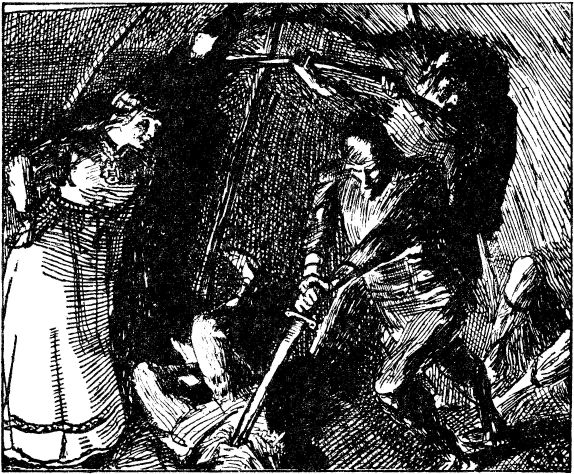 Eirik Bloodaxe (Old Norse: "Eiríkr blóðøx", Norwegian: "Eirik Blodøks"), (c. 895–954), was the second king of (930–934) and the eldest son of Harald Fairhair. Once he had secured power, he began to quarrel with his other brothers and had four of them killed, including and later Olaf and Sigrød in battle at . A text describes him as "fratris interfector" (brother-slayer), and it is entirely conceivable that the "blood" component of his refers to his propensity for .

In 920, he undertook a Viking expedition to , in northern Russia. In 930, he began his conquest by sailing down the Dvina River into Russia, where he sacked the small trading port of . In , he was invited to a feast by King ; it was here that he met Gunnhild and married her the next night.

Gunnhild had some reputation of being a . One account described her as living in a hut with two Finnish wizards and learning their magic, and when they quarrelled over her favours, she set Eirik to kill them, then married Eirik. There were also accounts which ascribed to her a part in killing some of her husband's brothers and other enemies by poisoning or raising storms to drown their ships. On occasion, she was reputed to go into prolonged s in her chamber, and by some accounts she was believed at such times to be able to transform herself into a bird and in that guise cross great distances over land and sea, spy out the movements of hostile armies from the air or listen to the conversations of unsuspecting enemies. Whatever the factual basis for such stories, Erik might have found his wife's fearsome reputation useful.

In the next Spring Eirik slaughtered the combined forces of his brothers and regained his throne of Norway.

His youngest brother, Haakon, returned from and won support from the Norwegian nobles to oust Eirik in 934; Eirik's rule was hard and despotic, which would certainly account for the alacrity with which the nobles joined forces to oust him.

After waging unsuccessful campaigns to regain the throne, Eirik moved to the and later to the Kingdom of Jorvik. He was initially met warmly by Athelstan, who made Eirik ruler in , with a brief to provide a defence against the ravages of the , and the Irish. His rule in Northumbria soon degenerated, however, and he was expelled by the populace and betrayed by Earl Osulf of Bernicia, to one Earl Maccus and killed in the in 954 along with his son, .

Through the instigation of his wife, Queen Gunnhild, King Eirik became involved in a prolonged conflict with , the well-known and . Details of this affair had been preserved mainly through Egil's poetry (which is admittedly not an unbiased source) and the account—of which a summary follows—seems designed to enhance Egill's abilities as warrior, wizard, and poet.

Egil had killed Bárðr of Atley, one of the king's retainers, thus making an enemy of Queen Gunnhild, who never forgave him and did everything within her power to take revenge. Gunnhild ordered her two brothers to kill Egil and Egil's older brother Þórólfr, who had been on good terms with both her and the king before. However, this plan did not go well, as Egil easily killed the pair when they confronted him, greatly increasing the Queen's thirst for revenge.

All that happened shortly before the death of and King Eirik's killing of his brothers to secure his place on the throne. He then declared Egill an outlaw in Norway. Berg-Önundr gathered a company of men to capture Egill, but was killed in his attempt to do so.

Escaping from Norway, Egil killed Rögnvaldr Eirikssen,the King's son, and then cursed his parents, setting a horse's head on a pole ("níðstöng" or "spite-post") and saying,:"'Here I set up a spite-post, and declare this curse against King Erik and Queen Gunnhildr,'—he turned the horse-head to face the mainland—'I declare this curse at the land-spirits there, and the land itself, so that all will fare astray, not to hold nor find their places, not until they wreak King Erik and Gunnhild from the land.'"

He set up the pole of spite in the cliff-face and left it standing; he faced the horse's eyes on the land, and he rist runes upon the pole, and said all the formal words of the curse. (ch. 57) ("níð" has been translated as "scorn", "spite" or "curse").

Gunnhild, also put a spell on Egill, which made him feel restless and depressed until they met again.

The last encounter happened when Erik and Gunnhild were living in England. Egil was shipwrecked on a nearby shore and came before Erik, who sentenced him to death. But Egill composed a "drápa" in Eirik's praise in the dungeon during the night, and when he recited it in the morning, Eirik gave him his freedom and forgave any vengeance or settlement for the killing of Rögnvaldr.

* , former daring hacker and present internationally-recognized expert on , had in his wilder days taken up the nickname "Eirik Bloodaxe" in honour of the Viking king.
* , a Danish-American writer of and , wrote "", a fictionalised of Queen Gunnhild, including myths as well as historical facts, and telling a lot about her husband and their children as well—especially the many efforts of Gunnhild and Eirik's sons to regain the throne of their father.
* Bloodaxe is one of many historical personages who feature prominently in the "" series of Bangsian science fiction novels by . On the Riverworld, Bloodaxe is sailing upRiver with and his prehistoric friend, and engages in a power struggle with .
* Eirik Bloodaxe appears in the historical Yorkshire building "York Dungeons" where he talks of killing his relatives, to tour of the room ends when he shouts them to leave before he "changed his mind" (suggesting he would have been wanting to kill them).