The redeveloped Old Swan Brewery complex, viewed from the Narrows

The Swan Brewery is a brewery located in Perth, Western Australia. It was founded in central Perth in 1837. From 1879, it occupied riverside premises below Mount Eliza, displacing an official "Aboriginal institution" which recognised traditional use of the land by indigenous people.[1][dead link]

The brewery operation was relocated to a large, fully automated factory at Canning Vale in the late 1970s and now produces local brands such as Swan and Emu, as well as external brands Tooheys and Hahn. During the mid-1980s, the company became part of the empire of the failed tycoon Alan Bond. It has since been acquired by Lion Nathan, a multinational brewing concern distributing many different beers in the Asia-Pacific area. Current products that were historically Swan brands include Swan Lager, Emu Bitter and Emu Export. 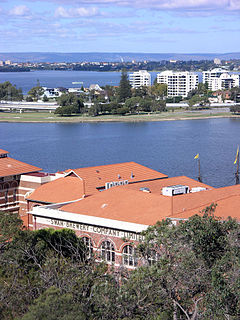 The 1879 brewery building on the Swan River foreshore beneath Mount Eliza became one of Perth's dominant and favourite landmarks. It was surrounded by a complex of other buildings which have since been demolished or redeveloped. The car-park building on the opposite side of Mount's Bay Road replaced the historic stables[2] which caught fire and were demolished in 1988.[3] Nevertheless, the state's Heritage Council noted that, prior to redevelopment,

The place contains, albeit partially demolished, the finest connected group of late-Victorian and early 20th-century brewery buildings in Australia in a red brick and tile Federation style idiom.[4]

In 1989, the West Australian state government vested the site in the building company Multiplex for a peppercorn rental, with a view to its being redeveloped as a commercial precinct. Perth's Noongar community reminded the state government of the site's ancient and sacred Indigenous Australian significance, and established a protest camp on the site, while challenging the issue at law and seeking to have the land reclassified as a public reserve. They were opposed by a Brewery Preservation Group which argued the indisputable heritage value of at least the 1979 industrial building. The developers argued that the brewery had been built on land reclaimed from the Swan River and, therefore, the site of Noongar heritage importance was further inland, close to the Mount Eliza escarpment and the fresh water spring known as Kennedy's Fountain. Ultimately the protest was unsuccessful and the development of the property went ahead. The on-site protest had endured for many months and culminated in a bitter but non-violent confrontation with police on 8 January 1990 at which several arrests were made. In August 1992, police had to break through picket lines to allow development work to proceed.[5]

The renovated 1879 building contains a cafe/restaurant and function centre which re-opened in 2001. It also contains a microbrewery which produces malt ales and lagers. There is also a display of historic photographs and artefacts.[6]