Anatoly Borisovich Shcharansky (Ukrainian: Анатолій Борисович Щаранський, Russian: Анатолий Борисович Щаранский) (later Natan Sharansky) was born in Stalino, Soviet Union on 20 January 1948 to a Jewish family. He graduated with a degree in applied mathematics from Moscow Institute of Physics and Technology. As a child, he was a chess prodigy. He performed in simultaneous and blindfold displays, usually against adults. At the age of 15, he won the championship in his native Donetsk.[1] When incarcerated in solitary confinement, he claims to have played chess against himself in his mind. Sharansky beat the world chess champion Garry Kasparov in a simultaneous exhibition in Israel in 1996.[1]

Natan Sharansky is married to Avital Sharansky and has two daughters, Rachel and Hannah. In the Soviet Union, his marriage application to Avital was denied by the authorities.[2] They were married in a Moscow synagogue in a ceremony not recognized by the government.

Sharansky was released in February 1986 after serving 3 years of prison and 5 years of strict-regimen forced labor penal colony in Perm Oblast, East Siberia. He was the first political prisoner ever released by Mikhail Gorbachev due to intense political pressure from Ronald Reagan. Sharansky immediately emigrated to Israel. In 1988, he wrote Fear No Evil, his memoirs of his time as a prisoner.

He was denied an exit visa to Israel in 1973. The reason given for denial of the visa was that he had been given access, at some point in his career, to information vital to Soviet national security and could not now be allowed to leave. After that Sharansky became a human rights activist and spokesperson for the Moscow Helsinki Group. Sharansky was one of the founders of the Refusenik movement in Moscow. In 1977 Sharansky was arrested on charges of spying for the United States and treason and sentenced to 13 years of forced labor in Perm 35, a Siberian labor camp.

Sharansky made aliyah to Israel, i.e. he emigrated to Israel, adopting the Hebrew name Natan. In 1988 Sharansky founded the Zionist Forum, an organization of Soviet emigrant Jewish activists dedicated to helping new Israelis and educating the public about absorption issues. Sharansky also served as a contributing editor to The Jerusalem Report and as a Board member of Peace Watch. In 1986, Congress granted him the Congressional Gold Medal.[5] In 2006 US President George W. Bush awarded him the Presidential Medal of Freedom,[6] which the The Palestinian Institute for the Study of Democracy denounced as the celebration of a racist.[7] On 17 September 2008,the Ronald Reagan Presidential Foundation awarded Sharansky its 2008 Ronald Reagan Freedom Award.[8] 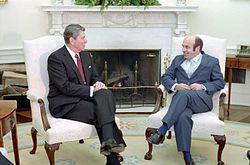 In 1995 Sharansky and Yoel Edelstein founded the Yisrael BaAliyah ("Israel in aliya", or a pun, "Israel on the rise") party, promoting the absorption of the Soviet Jews into Israeli society. The party won seven Knesset seats in 1996.[9] It won 6 seats in the Israeli legislative election, 1999, gaining two ministerial posts, but left the government on 11 July 2000 in response to suggestions that Ehud Barak's negiotations with the Palestinians would result in a division of Jerusalem. After Ariel Sharon won a special election for Prime Minister in 2001, the party joined his new government, and was again given two ministerial posts.[10]

In the January 2003 elections the party was reduced to just two seats. Sharansky resigned from the Knesset, and was replaced by Edelstein. However, he remained party chairman, and decided to merge it into Likud (which had won the election with 38 seats). The merger went through on 10 March 2003,[11] and Sharansky was appointed Minister of Jerusalem Affairs.

From March 2003 – May 2005, he was Israel's Minister without portfolio, responsible for Jerusalem, social and Jewish diaspora affairs. Under this position Sharansky chaired a secret committee that approved the seizure of East Jerusalem property of West Bank Palestinians. This decision was reversed after an outcry from the Israeli left and the international community.[12] Previously he served as the Deputy Prime Minister of Israel, Minister of Housing and Construction since March 2001, Interior Minister of Israel (July 1999 – resigned in July 2000), Minister of Industry and Trade (1996–1999). He resigned from the cabinet in April 2005 to protest plans to withdraw Israeli settlements from the Gaza Strip. He was re-elected to the Knesset in March 2006 as a member of the Likud Party. On 20 November 2006, he resigned from the Knesset to form the Adelson Institute for Strategic Studies.[13] Since 2007, Sharansky has been Chairman of the Board of Beit Hatefutsot, the Jewish diaspora museum,[14] and since June 2009 is the chairman of the executive of the Jewish Agency for Israel.

Before his rise to power in Israel, Sharansky appeared in the March 1990 edition of National Geographic in Mike Edward's article "Last Days of the Gulag". In the article he describes his life in the Soviet prison system and is shown in Israel looking at photos of the Gulag taken for the article. In 2005, Sharansky participated in "They Chose Freedom", a four-part television documentary on the history of the Soviet dissident movement, and in 2008, he was featured in the Laura Bialis documentary Refusenik. He was number eleven on the list of TIME magazine's 100 most influential people of 2005 in the "Scientists and thinkers" category.[17] 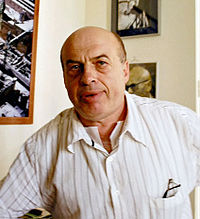 Sharansky is the author of three books. The first is the autobiographical Fear No Evil, which dealt with his trial and imprisonment. His second book, "The Case for Democracy: The Power of Freedom to Overcome Tyranny and Terror" was co-written with Ron Dermer. George W. Bush offered praise for the book:

"If you want a glimpse of how I think about foreign policy, read Natan Sharansky's book, The Case for Democracy... For government, particularly – for opinion makers, I would put it on your recommended reading list. It's short and it's good. This guy is a heroic figure, as you know. It's a great book."[18][19]

His book Defending Identity: Its Indispensable Role in Protecting Democracy, is a defense of the value of national and religious identity in building democracy.[20] 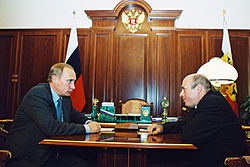 Sharansky has argued that there can never be peace between Israel and the Palestinians until there is "the building of real democratic institutions in the fledgling Palestinian society, no matter how tempting a 'solution' without them may be."[21] In a Haaretz interview, he maintained the “Jews came here 3,000 years ago and this is the cradle of Jewish civilization. Jews are the only people in history who kept their loyalty to their identity and their land throughout the 2,000 years of exile, and no doubt that they have the right to have their place among nations—not only historically but also geographically. As to the Palestinians, who are the descendants of those Arabs who migrated in the last 200 years, they have the right, if they want, to have their own state... but not at the expense of the state of Israel.”[22] In the wake of the Arab uprisings of 2011, he told Moment Magazine, "To sign an agreement you must have a partner who is dependent on the well-being of his people, which is what democracy means."[23]