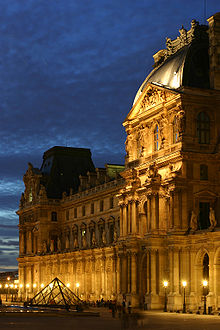 The Louvre in Paris, France, is one of the world's largest museums and it is the most visited art museum in the world.

An art gallery or art museum is a building or space for the exhibition of art, usually visual art. Museums can be public or private, but what distinguishes a museum is the ownership of a collection. Paintings are the most commonly displayed art objects; however, sculpture, decorative arts, furniture, textiles, costume, drawings, pastels, watercolors, collages, prints, artists' books, photographs, and installation art are also regularly shown.[1] Although primarily concerned with providing a space to show works of visual art, art galleries are sometimes used to host other artistic activities, such as performance art, music concerts, or poetry readings. 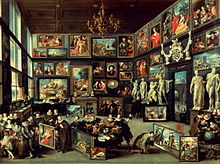 The Gallery of Cornelis van der Geest, Willem van Haecht, 1628. A private picture gallery as an early precursor of the modern museum.

The term is used for both public galleries, which are non-profit or publicly owned museums that display selected collections of art. On the other hand private galleries refers to the commercial enterprises for the sale of art. However, both types of gallery may host traveling exhibits or temporary exhibitions including art borrowed from elsewhere.

The rooms in museums where art is displayed for the public are often referred to as galleries as well, with a room dedicated to Ancient Egyptian art often being called the Egyptian Gallery, for example.

The term contemporary art gallery refers usually to a privately owned for-profit commercial gallery. These galleries are often found clustered together in large urban centers. Smaller cities are usually home to at least one gallery, but they may also be found in towns or villages, and remote areas where artists congregate, e.g. the Taos art colony and St Ives, Cornwall.

Contemporary art galleries are usually open to the general public without charge; however, some are semi-private. They usually profit by taking a portion of art sales; from 25% to 50% is typical. There are also many non-profit or collective galleries. Some galleries in cities like Tokyo charge the artists a flat rate per day, though this is considered distasteful in some international art markets. Galleries often hang solo shows. Curators often create group shows that say something about a certain theme, trend in art, or group of associated artists. Galleries sometimes choose to represent artists exclusively, giving them the opportunity to show regularly.

A gallery's definition can also include the artist cooperative or artist-run space, which often (in North America and Western Europe) operates as a space with a more democratic mission and selection process. Such galleries typically have a board of directors and a volunteer or paid support staff that select and curate shows by committee, or some kind of similar process to choose art that typically lacks commercial ends.

A vanity gallery is an art gallery that charges fees from artists in order to show their work, much like a vanity press does for authors. The shows are not legitimately curated and will frequently or usually include as many artists as possible. Most art professionals are able to identify them on an artist's resume.[2]

Visual art not shown in a gallery

Works on paper, such as drawings, pastels, watercolors, prints, and photographs are typically not permanently displayed for conservation reasons. Instead, public access to these materials is provided by a dedicated print study room located within the museum. Murals generally remain where they have been painted, although many have been removed to galleries. Various forms of 20th century art, such as land art and performance art, also usually exist outside a gallery. Photographic records of these kinds of art are often shown in galleries, however. Most museum and large art galleries own more works than they have room to display. The rest are held in reserve collections, on or off-site.

Similar to an art gallery is the sculpture garden (or sculpture park), which presents sculpture in an outdoor space. Sculpture installation has grown in popularity, whereby temporary sculptures are installed in open spaces during events like festivals.

The architectural form of the art gallery was established by Sir John Soane with his design for the Dulwich Picture Gallery in 1817. This established the gallery as a series of interconnected rooms with largely uninterrupted wall spaces for hanging pictures and indirect lighting from skylights or roof lanterns.

The late 19th century saw a boom in the building of public art galleries in Europe and America, becoming an essential cultural feature of larger cities. More art galleries rose up alongside museums and public libraries as part of the municipal drive for literacy and public education.

In the middle and late 20th century earlier architectural styles employed for art museums (such as the Beaux-Arts style of the Metropolitan Museum of Art in New York City or the Gothic and Renaissance Revival architecture of Amsterdam's Rijksmuseum) were increasingly replaced with more modern styles, such as Deconstructivism. Examples of this trend include the Guggenheim Museum in New York City by Frank Lloyd Wright, Frank Gehry's Guggenheim Museum Bilbao, Centre Pompidou-Metz by Shigeru Ban, and Mario Botta's redesign of the San Francisco Museum of Modern Art. Some critics argue that these galleries are self-defeating, in that their dramatic interior spaces distract the eye from the paintings they are supposed to exhibit.

Many art museums throughout history have been designed with a cultural purpose or been subject to political intervention. In particular National Art Galleries have been thought to incite feelings of nationalism. This has occurred in both democratic and non-democratic countries, although authoritarian regimes have historically exercised more control over administration of art museums. Ludwig Justi was for example dismissed as director of the The Alte Nationalgalerie (Old National Gallery) in Berlin in 1933 by the new Nazi authorities for not being politically suitable.[3]

Since the 1970s a number of political theorists and social commentators have pointed to the political implications of art museums and social relations. Pierre Bourdieu, for instance, argued that in spite the apparent freedom of choice in the arts, people's artistic preferences (such as classical music, rock, traditional music) strongly tie in with their social position. So called Cultural capital is a major factor in social mobility (for example, getting a higher-paid, higher-status job). The argument states that certain art museums are aimed at perpetuating aristocratic and upper class ideals of taste and excludes segments of society without the social opportunities to develop such interest. The fine arts thus perpetuate social inequality by creating divisions between different social groups. This argument also ties in with the Marxist theory of mystification and elite culture.[4]

Furthermore, certain art gallerias, such as the National Gallery in London and the Louvre in Paris are situated in buildings of considerable emotional impact. The Louvre in Paris is for instance located in the former Royal Castle of the ancient regime, and is thus clearly designed with a political agenda. It has been argued that such buildings create feelings of subjugation and adds to the mystification of fine arts.[5]

Museums, libraries and government agencies with substantial online collections with more focus on paintings and sculpture include:

There are a number of online art catalogues and galleries that have been developed independently of the support of any individual museum. Many of these are attempts to develop galleries of artwork that are encyclopedic or historical in focus, while others are commercial efforts to sell the work of contemporary artists.

A limited number of such sites have independent importance in the art world. The large auction houses, such as Sotheby's and Christie's maintain large online databases of art which they have auctioned or are auctioning. Bridgeman Art Library serves as a central source of reproductions of artwork, with access limited to museums, art dealers and other professionals or professional organizations.

The steve.museum is one example of a site that is experimenting with this collaborative philosophy. The participating institutions include the Guggenheim Museum, the Cleveland Museum of Art, the Metropolitan Museum of Art and the San Francisco Museum of Modern Art.