Harald V (born 21 February 1937) is the king of Norway. He succeeded to the throne of Norway upon the death of his father Olav V on 17 January 1991. The son of the then-Crown Prince Olav and of Princess Märtha of Sweden, Harald was born at the Crown Prince Residence at Skaugum, Akershus, Norway.

A member of the House of Schleswig-Holstein-Sonderburg-Glücksburg, originally from Northern Germany, Harald became the first Norwegian-born prince since Olav IV, who was born in 1370. Harald V is the formal head of the Church of Norway and the Norwegian Armed Forces. He has two children, Crown Prince Haakon and Princess Märtha Louise. His grandchildren are Maud Angelica (2003), Leah Isadora (2005), Emma Tallulah (2008), Princess Ingrid Alexandra (2004), and Prince Sverre Magnus (2005). 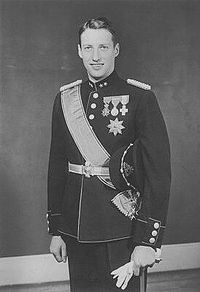 Prince Harald was born in Skaugum. The young prince was baptised in the Royal Chapel in the Royal Palace in Oslo on 31 March by Bishop Johan Lunde.

In 1940 the entire royal family had to flee their homes because of the German invasion. The dramatic journey northbound was marked by the Germans' repeated attempts to kill the King through bombing. It was deemed safer for the family to split up. The King and Crown Prince Olav would remain in Norway and the Crown Princess was to make her way to Sweden with the three children. The latter party reached Sweden on the night of 10 April, but although Crown Princess Märtha was Swedish-born, they encountered problems at the border station. According to Princess Astrid and others who were present, they were admitted only after the driver threatened to ram the border gate. Another account does not describe the escape so dramatically.[4] However when the King and Crown Prince inquired of Swedish foreign minister Christian Günther whether they could sleep one night in Sweden without being interned, they were denied.[4]

Prince Harald spent the following days in Sälen before relocating to Prince Carl Bernadotte's home in Frötuna on 16 April. On 26 April the group moved to Drottningholm in Stockholm. Accounts tell us that King Gustaf V had an amicable relationship with his Norwegian guests, but the topic of the war in Norway was not to be raised. However, influential Swedish politicians including Minster of Justice Westman wanted the Crown Princess and Prince Harald to be sent back to Norway so he could be proclaimed King by the Germans.[4][5] After the King and Crown Prince had to leave Norway on 7 June they felt Sweden might not be the best place for the rest of the family. They started planning for them to be relocated to the USA. On 17 August the Crown Princess and her children left for the USA from Petsamo, Finland, aboard the ship American Legion.[4]

Harald and his mother and sisters lived in Washington, D.C., during the war,[6] while his father, Prince Olav, and his grandfather, King Haakon, stayed in London with the Norwegian government-in-exile. One of the notable events he remembers from that time is standing behind Franklin D. Roosevelt when he was sworn in for his fourth term on the South Portico of the White House in 1945. Such childhood experiences are reflected in a trace of an American accent when he speaks English.[7] The Doris Kearns Goodwin book No Ordinary Time: Franklin and Eleanor Roosevelt and the Home Front in World War II contains a picture of the King (then Prince) playing with FDR's dog, Fala, on the North Lawn of the White House in 1944.

Prince Harald visited Norwegian servicemen on training in the United States. The prince also visited outside America, travelling north to visit Norwegians training in Canada's "Little Norway" in Ontario, Canada. He attended The White Hall Country School from 1943. Prince Harald returned to Norway along with his family at the war's end in 1945.

In the autumn of 1945 he was enrolled in third grade of Smestad skole as the first royal to attend a public school. In 1955 he graduated from Oslo katedralskole and in the autumn of that year, Harald began studies at the University of Oslo. Later he attended the Cavalry Officers' Candidate School at Trandum, followed by enrollment at the Norwegian Military Academy, from which he graduated in 1959.

In 1960, Harald entered Balliol College, Oxford where he studied history, economics and politics.[7] He was a keen rower during his student days at Oxford. In 1960 he also made his first official journey abroad, visiting the United States in connection with the fiftieth anniversary of the American Scandinavian Foundation.

Harald married a commoner, Sonja Haraldsen, at Oslo Domkirke in Oslo on 29 August 1968, a marriage that sparked much public controversy. The couple have two children, Princess Märtha Louise and His Royal Highness Crown Prince Haakon, heir to the Norwegian throne.

The King heads the government meetings at Oslo Palace every Friday (Council of State). He also has weekly meetings with the Prime Minister and the Foreign Minister. He receives foreign envoys, and opens parliament every September. According to the Norwegian constitution, he appoints his government. Since 1884 parliamentarism has been in place in Norway, so the government has to have support from Parliament. The King appoints the leader of the parliamentary block with majority as prime minister. When the parliamentary situation is unclear the king relies on the advice of the president of Parliament and the sitting prime minister. He travels extensively throughout Norway and makes official state visits to other countries.

An avid sailor,[8] Harald represented Norway in the yachting events of Olympic Games in Tokyo in 1964[9] and in Mexico City in 1968[7] and the Munich 1972. The Crown Prince carried the Norwegian flag at the opening parade of the 1964 Summer Olympics. In 1994, both the King and Crown Prince Haakon played roles during the opening ceremony of the Lillehammer Olympics. The King declared opened the games, while the Crown Prince lit the cauldron, paying tribute to both the King and his grandfather as Olympians. The King has also represented Norway at opening ceremonies of Olympic Games, among them Torino and Beijing. However, he wasn't present in Vancouver, the Crown Prince attended instead.

Twice during recent years, King Harald has been unable to perform his monarchial duties, owing to hospitalization and convalescence: in December 2003 to mid-April 2004 due to urinary bladder cancer, and in April to early June 2005 due to aortic stenosis (for details see "The King's health", below). Crown Prince Haakon served as the country's regent on both occasions.

Positions as King of Norway and honorary titles

As King of Norway

The King is the nominal head of the Church of Norway.

He is a Four-star General, an Admiral and formally the Supreme Commander of the Norwegian Armed Forces. The infantry battalion His Majesty the King's Guard are considered the King's and the Royal Family's bodyguards, they guard the Royal residences, including the Royal Palace and the Crown Prince Residence at Skaugum, as well as the Royal Mausoleum at Akershus Castle.

In the British Army, the King was the final Colonel-in-Chief of the Green Howards. It remains to be seen whether there will continue to be an active association between the 2nd Battalion, Yorkshire Regiment (Green Howards) and the Norwegian Royal Family. He is also an honorary Colonel in the British Royal Marines.

The King is patron of the Anglo-Norse Society in London, together with Queen Elizabeth II, his second cousin. He is also patron of the Norwegian-American Foundation (Norge-Amerika Foreningen) and the Norse Federation (Nordmanns-Forbundet) in the United States.

He received the honorary degree Doctor of Civil Law from Oxford University in 2006 (as did his father, King Olav, in 1937, and his grandfather, King Haakon, in 1943).[11] The King has earlier been appointed an honorary doctor of law by the University of Strathclyde (1985) in Scotland and by Waseda University (2001) in Japan (2001). He is also an honorary fellow at Balliol College, Oxford.

King Harald V is Honorary President of the Offshore Racing Congress[12] and also the Co-President of Honour of the International Sailing Federation with the King Constantine II of Greece.[13]

On 1 December 2003, King Harald was announced to be suffering from bladder cancer. A successful operation took place on 8 December at Norway's National Hospital, Rikshospitalet, in Oslo: his bladder was removed and a new one constructed. The King was then on sick leave from all official duties. Crown Prince Haakon was Norway's regent during King Harald's illness and convalescence. The King resumed his duties on 13 April 2004.

The King was once known to be a chain-smoker, but quit that habit entirely when he was diagnosed with cancer.

On 1 April 2005, Harald underwent successful heart surgery, an aortic valve replacement, correcting his aortic stenosis. It had been known for some time that he had this condition; however, until early 2005 it had only been of a moderate degree. During the three-hour operation at Rikshospitalet the doctors also performed a coronary bypass procedure on the King. On 10 April, it was announced that the King had also undergone a pericardiocentesis to treat a complication of surgery, a pericardial effusion (an accumulation of fluid around the heart).

After the two operations in the spring of 2005, King Harald remained on sick leave for almost two months, Crown Prince Haakon again substituting as the country's regent. The King returned to work on 7 June, a date which carried particular significance in 2005, with Norway celebrating the centennial of the dissolution of the 1814–1905 union with Sweden. The King recuperated well enough to win the European Championships in ocean sailing just three months after his latest operation.

Following advice from his personal physician, King Harald finally decided in late 2005 to scale down his official duties, primarily effected by taking Wednesdays off and trying to keep weekends free as much as possible. However, he planned to continue attending weekend sports events of interest, and to lead Friday Cabinet meetings and carry out other constitutional duties.