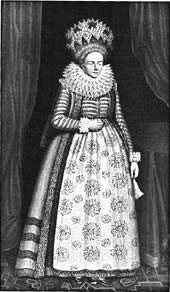 Elizabeth Tanfield Cary, Lady Falkland (1585&ndash;1639) was a poet, translator, and dramatist. Precocious and studious, she was known from a young age for her learning and knowledge of languages. At the age of fifteen she married and over the next decades she bore eleven children. She was disinherited by her father for using part of her jointure to meet expenses, and the family were in financial difficulties from thereon. Her husband abandoned her to poverty in 1626 and denied her access to their children when she made public her conversion to Catholicism. Despite several orders of the Privy Council, he refused her a maintenance in an apparent effort to force her to recant. She lived in abject circumstances, though she still managed to maintain connections with a constellation of politically prominent women. Her husband died in 1633 and she sought to regain custody of her children. She was questioned in the for kidnapping her sons (she had previously, and more easily, gained custody of her daughters), but although she was threatened with imprisonment there is no record of any punishment. Cary died in London in 1639.

Cary was associated with the literary circle of Mary Herbert, Countess of Pembroke, and a number of writers dedicated various works to her, a testament to her literary reputation. According to her daughter's manuscript biography she was the author of a number of poems and translations, though all but a few of these works have been lost. She is best known now for ", the Fair Queen of Jewry" (1613), the first original play in English known to have been written by a woman. She was also the first English woman author to be the subject of a literary biography&mdash;"The Lady Falkland: Her Life" was written by one of her daughters, probably in the 1643-50 era, though not published till 1861. (All four of Cary's daughters became nuns at a convent in , France. The identity of the daughter who wrote her mother's life is uncertain.)