The Delaware, Lackawanna and Western Railroad Company (DL&W or Lackawanna) (reporting mark DLW) was a railroad connecting Pennsylvania's Lackawanna Valley, rich in anthracite coal, to Hoboken, New Jersey, (with rail and ferry service to New York City), Buffalo and Oswego, New York. It merged with the Erie Railroad in 1960, forming the Erie Lackawanna Railroad, and was absorbed into Conrail in 1976. 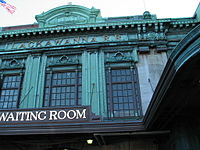 The Liggett's Gap Railroad was incorporated on April 7, 1832, but stayed dormant for many years. It was chartered on March 14, 1849, and organized January 2, 1850. On April 14, 1851, its name was changed to the Lackawanna and Western Railroad. The line, running north from Scranton, Pennsylvania, to Great Bend, just south of the New York state line, opened on December 20, 1851. From Great Bend the L&W obtained trackage rights north and west over the New York and Erie Rail Road to Owego, New York, where it leased the Cayuga and Susquehanna Railroad to Ithaca on Cayuga Lake (on April 21, 1855). The C&S was a re-organized and partially re-built Ithaca and Owego Railroad, which had opened on April 1, 1834, and was the oldest part of the DL&W system. The whole system was built to 6 ft 0 in (1829 mm) broad gauge, the same as the New York and Erie, although the original I&O was built to standard gauge and converted to wide gauge when re-built as the C&S.

The Delaware and Cobb's Gap Railroad was chartered December 4, 1850, to build a line from Scranton east to the Delaware River. Before it opened, the Delaware and Cobb's Gap and Lackawanna and Western were consolidated by the Lackawanna Steel Company into one company, the Delaware, Lackawanna and Western Railroad, on March 11, 1853. On the New Jersey side of the Delaware River, the Warren Railroad was chartered February 12, 1851, to continue from the bridge over the river southeast to Hampton on the Central Railroad of New Jersey. That section got its name from Warren County, the county through which it would primarily run.

The rest of the line, now known as the Southern Division, opened on May 27, 1856, including the New Jersey section (the Warren Railroad). A third rail was added to the standard gauge Central Railroad of New Jersey east of Hampton to allow the DL&W to run east to Elizabeth via trackage rights (the CNJ was extended in 1864 to Jersey City).

On December 10, 1868, the DL&W bought the Morris and Essex Railroad. This line ran east-west across northern New Jersey, crossing the Warren Railroad at Washington and providing access to Jersey City without depending on the CNJ. The M&E tunnel under Bergen Hill opened in 1876, also relieving it of its use of the New York, Lake Erie and Western Railway in Jersey City. Along with the M&E lease came several branch lines in New Jersey, including the Boonton Line (opened in 1870), which bypassed Newark for through freight.

The DL&W bought the Syracuse, Binghamton and New York Railroad in 1869 and leased the Oswego and Syracuse Railroad on February 13, 1869. This gave it a branch from Binghamton north and northwest via Syracuse to Oswego, a port on Lake Ontario.

The Greene Railroad was organized in 1869, opened in 1870, and was immediately leased to the DL&W, providing a short branch off the Oswego line from Chenango Forks to Greene. Also in 1870 the DL&W leased the Utica, Chenango and Susquehanna Valley Railway, continuing this branch north to Utica, with a branch from Richfield Junction to Richfield Springs (fully opened in 1872).

The Valley Railroad was organized March 3, 1869, to connect the end of the original line at Great Bend, Pennsylvania to Binghamton, New York, avoiding reliance on the Erie. The new line opened October 1, 1871.

By 1873, the DL&W controlled the Lackawanna and Bloomsburg Railroad, a branch from Scranton southwest to Northumberland (with trackage rights over the Pennsylvania Railroad's Northern Central Railway to Sunbury).

The New York, Lackawanna and Western Railroad was chartered August 26, 1880, and opened September 17, 1882, to continue the DL&W from Binghamton west and northwest to Buffalo. The main line ran to the International Bridge to Ontario, and a branch served downtown Buffalo.

On December 1, 1903, the DL&W began operating the Erie and Central New York Railroad, a branch of the Oswego line from Cortland Junction east to Cincinnatus.

By 1909, the DL&W controlled the Bangor and Portland Railway. This line branched from the main line at Portland, Pennsylvania southwest to Nazareth, with a branch to Martins Creek.

The DL&W built a Beaux Arts terminal in Hoboken, New Jersey, in 1907, followed by another Beaux Arts passenger station in Scranton, Pennsylvania, in 1908. This is now a Radisson Hotel. 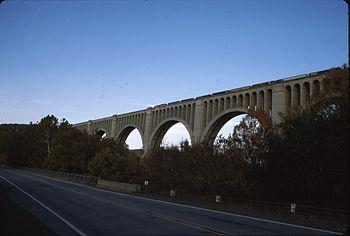 The Tunkhannock Viaduct in Nicholson, Pennsylvania, in October 1988. A Delaware & Hudson Railway train on the bridge is dwarfed by the structure, which stands 240 ft (74 m) above the creek for which it is named.

The Lackawanna Railroad of New Jersey, chartered on February 7, 1908, to build the Lackawanna Cut-Off (a.k.a. New Jersey Cutoff or Hopatcong-Slateford Cutoff), opened on December 24, 1911. This provided a low-grade cutoff in northwestern New Jersey. The cutoff included the Delaware River Viaduct and the Paulinskill Viaduct, as well as three concrete towers at Port Morris and Greendell in New Jersey and Slateford Junction in Pennsylvania.

From 1912 to 1915, the Summit-Hallstead Cutoff (a.k.a. Pennsylvania Cutoff or Nicholson Cutoff) was built to revamp a winding and hilly system between Clarks Summit, Pennsylvania, and Hallstead, Pennsylvania. This rerouting provided another quicker low-grade line between Scranton, Pennsylvania, and Binghamton, New York. The Summit Cut-Off included the massive Tunkhannock Viaduct and Martins Creek Viaduct.

The Lackawanna's cutoffs had no at-grade crossings with roads or highways, allowing high-speed service.

In August 1955, Hurricane Diane washed-out much of the Lackawanna's mainline in the Poconos, causing the railway to suspend operations for nearly a month. The resulting debts and operational constraints placed upon the DL&W contributed to its ultimate merger with the Erie Railroad in 1960.

On October 17, 1960, the DL&W merged with its former rival and virtual partner, the Erie Railroad, to form the Erie Lackawanna Railroad (EL).

With the merger into the EL, much of the DL&W trackage was redundant. The main line of the DL&W from Binghamton west to near Corning closely paralleled the Erie's main line, and had already been abandoned in 1958 in favor of joint operations. On the other hand, the Erie's Buffalo, New York and Erie Railroad was dropped from Corning to Livonia in favor of the DL&W's main line. The New Jersey Cutoff had already been downgraded to a single track with passing sidings by the DL&W in 1958. Most passenger service was routed onto the DL&W east of Binghamton, with the DL&W's Hoboken Terminal serving passenger trains. With the arrival of Interstate 80, the Boonton Branch was torn up through Paterson to make way for the new superhighway. The west end of the Boonton Line was combined with the Erie's Greenwood Lake Line, while the eastern end was combined with the Erie's Main Line, which was abandoned through Passaic, New Jersey.

Conrail absorbed the EL in 1976. New Jersey Transit has taken over most of the former DL&W (Morris and Essex Railroad) lines in New Jersey, including the main line east of Hackettstown (operated by Conrail under trackage rights). The New Jersey Cutoff was abandoned in 1979 and its rails were removed in 1984, but the right of way was purchased by the state of New Jersey with a $40 million bond issue in 1998, and remains intact. New Jersey Transit has estimated it would cost $551 million to restore service to Scranton over the Cutoff. This price includes the cost of new trainsets.

In 1979, Conrail sold most of the DL&W in Pennsylvania, with the portion between Scranton and Binghamton bought by the Delaware and Hudson Railway. The D&H was absorbed into the Canadian Pacific Railway in 1991. To this day, CPR continues to run over the line.

The Syracuse and Utica branches north of Binghamton have been retained, sold by Conrail to the DO Corp., which operates them as the northern division of the New York, Susquehanna and Western Railway; although, since 2007, the Utica Branch is out-of-service between Chenango Forks and Oxford, New York, due to washouts and little traffic.

New Jersey Transit took over passenger operations in 1983, having previously subsidized the routes operated by the EL, and later Conrail, under contract. NJ Transit operates over former DL&W trackage on much of the former Morris & Essex Railroad to Gladstone and Hackettstown. In 2002, the transit agency consolidated the Montclair Branch and Boonton Line to create the Montclair-Boonton Line. NJ Transit also operates on the original eastern portion of the Boonton Line known as the Main Line. NJ Transit's hub is located at Hoboken Terminal.

In 1998, the states of New Jersey and Pennsylvania purchased their respective portions of the abandoned New Jersey Cutoff for a total of $21 million, with hopes of restoring passenger service between Hoboken and Scranton. Ironically, they could have purchased the single-track former DL&W main line all the way from Scranton,Pennsylvania, to Port Morris, New Jersey, for just $6.5 million, in 1983, but shortsightedly declined this CONRAIL offer. Pennsylvania spent an additional large sum of money to purchase the former DL&W main line trackage in Lackawanna and Monroe counties, between Slateford Junction and Scranton, Pennsylvania, about 1992.

With the 1998 breakup of Conrail, what remains of the DL&W main line from Scranton east into Monroe County is owned by the Pennsylvania Northeast Regional Rail Authority and trains are run by designated-operator Delaware-Lackawanna Railroad. In 2006, the Monroe County and Lackawanna County Railroad Authorities joined together to form the Pennsylvania Northeast Regional Rail Authority to help speed up the resumption of New York City-Scranton commuter trains. It is on the Pocono Mainline into Moscow and Tobyhanna that the steam trains of the Steamtown National Historic Site operate out of Scranton. Since the summer of 1998, the D-L, under a haulage agreement with the Canadian Pacific Railway, has been running unit Canadian grain trains between Scranton and the Harvest States Grain Mill at Pocono Summit, Pennsylvania. Original sections of the Lackawanna and Wyoming Valley Railroad and Erie Railroad's Wyoming Division between Scranton and Montage Mountain, Moosic have been purchased by Lackawanna County, Pennsylvania, and placed back in service with overhead electrified wiring and designated-operator Delaware-Lackawanna Railroad overseeing both freight operations and the county's tourist trolley runs, the Electric City Trolley Museum.

The majority of the main line west of Binghamton is also abandoned, in favor of the Erie's Buffalo and New York Central Railroad. The longest remaining main line sector is Painted Post-Wayland, with shortline service provided by B&H Railroad (Bath & Hammondsport, a division of the Livonia, Avon & Lakeville Railroad). Shorter main line remnants are Groveland-Greigsville (Genesee & Wyoming) and Lancaster-Depew (Depew, Lancaster & Western). The Richfield Springs branch was scrapped in 1998 after being out of service for years, and the Cincinnatus Branch, abandoned by Erie Lackawanna in 1960, was partially rebuilt for an industrial spur about 1999.