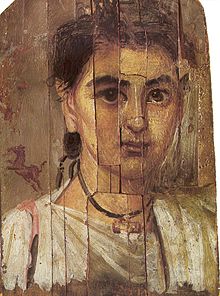 One of the Fayoum portraits depicting a boy, 2nd century, Warsaw. Encaustic on wood 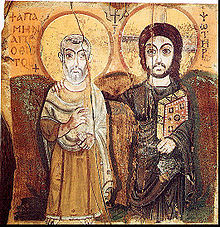 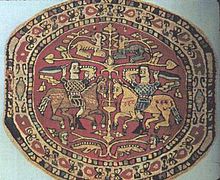 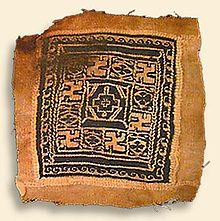 Coptic art is a term used either for the art of Egypt produced in the early Christian era or for the art produced by the Coptic Christians themselves. Coptic art is most well known for its wall-paintings, textiles, illuminated manuscripts, and metalwork, much of which survives in monasteries and churches. The artwork is often functional, as little distinction was drawn between artistry and craftsmanship, and includes tunics and tombstones as well as portraits of saints. The Coptic Museum in Coptic Cairo[1] houses some of the world's most important examples of Coptic art and iconography.[2]

Coptic art displays a mix of native Egyptian and Hellenistic influences [3]. Subjects and symbols were taken from both Greek and Egyptian mythology, sometimes altered to fit Christian beliefs. Persia and Syria also influenced Coptic art, though to a lesser extent, leaving images such as the peacock and the griffin.

Coptic icons have their origin in the Hellenistic art of Egyptian Late Antiquity, as exemplified by the Fayum mummy portraits [4]. The faces of El Fayum are examples of the Coptic art in the 2nd century AD showing the Greek and Roman influence on the Coptic art but with some distinctive features related to Egyptian art

The Arabic conquest of Egypt allowed the Coptic art to influence the Islamic art and architecture with many features that are now integral in the Islamic art.

Beginning in the 4th century, churches painted their walls and made icons to reflect an authentic expression of their faith.

The figures of saints display eyes and ears larger in proportion to the rest of the face and a smaller mouth, as well as enlarged heads, signifying a spiritual relationship with God and devotion to prayer. Martyrs' faces were peaceful.

Many Coptic iconographers did not sign their names, but the prominent among them include St. Luke (traditionally believed to be the first icon painter) and two Coptic Popes, Pope Macarius I and Pope Gabriel III[5]

Menas flasks are very cheap terracotta bottles bought by pilgrims to Abu Mina, the shrine of Saint Menas, in the 4th and 5th centuries. The clay was impressed before firing with blocks with images of the saint. They have been found nearly all over the Christian world, and many scholars trace influence from their fairly crude images in the emerging iconography of Western medieval art, among other Coptic influences.

A remarkable number of Coptic textiles survive today, due to the Coptic custom of burying them with the dead, and to the aridity of Egyptian graves. The textiles are commonly linen or wool and use the colors red, blue, yellow, green, purple, black and brown. The dyes were derived from madder, indigo, woad, saffron, the murex shell, and the kermes insect. The first looms used were horizontal low-warp; vertical high-warp looms were introduced later. The basic garment was the tunic, which would become the dalmatic. Some tunics were woven in one piece. They were decorated by clavi, a stylistic import from Rome.

Some fine examples of the Coptic textile are shown in museums all over the world and a large collection is in the Coptic Museum in Coptic Cairo [7] Tens of thousands of coloured fragments found their way into the museums of the world, especially after 1889 when the French archaeologist Albert Gayet published a catalogue of Coptic art and, in the Bulaq Museum, staged the first exhibition of Coptic monuments.[8]. The early Coptic textiles still produced pictures and decoration incorporating Egyptian and Greek motifs. Shrouds, for example, might incorporate classical elements were painted in the form of an Egyptian sarcophagus and include representations of Egyptian gods to protect the dead. Later coptic textiles showed the influence of Byzantium and later, Islamic art.

Modern Coptic art is also known as the Neo-Coptic school. In recent centuries icons have been the main means of expression, keeping most traditional aspects. Coptic icons are more concerned religious truth and beauty than with realism, the depiction of depth, or perspective. As in the Byzantine and related traditions, the figures are depicted frontally, looking straight at the viewer. Today, Coptic icons are found not only in churches, but also in homes and praying altars. They may also be purchased from Coptic gift shops throughout Egypt and the Coptic diaspora. (see firstimageicons.com)

During the papacy of Pope Cyril VI, the emergence of Coptic painters like Dr. Isaac Fanous Youssef, along with the revival of Coptic art, brought about the creation of the Contemporary or Neo-Coptic school of iconography.