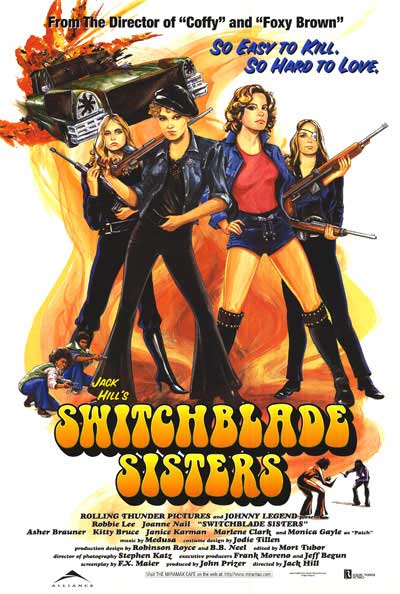 "Switchblade Sisters" is a 1975 action and detailing the lives of high school-aged female members. It was directed by and stars , and . A personal favorite of , the film was re-released in 1996 under Tarantino's label. This version of the film features a commentary by both Hill and Tarantino. The film's tagline is "So Easy to Kill, So Hard to Love."

Maggie (Joanne Nail) transfers from across town to a new that is essentially run by the Silver Daggers, a rough, hierarchical male gang, and their female counterparts, the Dagger Debs. A confrontation between the Dagger Debs and the "repo man" gets all the female members — and Maggie — arrested. Because Maggie is new, a lecherous at the () threatens to physically abuse her. Maggie fights back and eventually the Dagger Debs join her. Subsequently, Dagger Deb leader Lace (Robbie Lee) decides she likes Maggie. Patch, however, is incensed that Lace shows such affection for Maggie, and starts telling Lace that Maggie wants to steal both Lace's boyfriend, Dominic (), and Lace's position as the leader of the Dagger Debs. Meanwhile, the Silver Daggers have to contend with the arrival of a new gang, led by the villainous Crabs (), at the high school. The tensions between the two groups ultimately leads Maggie to devise an ambush on Crabs's men at a local roller rink, but the effort proves disastrous when Crabs' men show up heavily armed, kill Dominic, and brutally assault Lace, causing her to miscarry the baby she was secretly carrying. While Lace recuperates in the hospital, Maggie assumes leadership of the gang, expels the men and changes its name to The s. She teams up with Muff () and her gang of girls from across town to ambush Crabs. All the while, Maggie suspects that someone in her group tipped Crabs off to their plans at the roller rink, but Patch shoots Crabs before he has a chance to squeal. After The Jezebels emerge victorious, Lace and Patch attempt to convince the gang that Maggie, in fact, was the traitor. The members refuse to believe Lace's assertions, however, and Maggie and Lace eventually duel. When Maggie kills Lace, the police burst into the hideout just in time to arrest everybody who admits to being part of the gang. Patch confesses to being a Jezebel, but as revenge for her treachery, the other girls don't acknowledge that she is in the gang or that they have ever seen her before.

*Though the film depicts an unrealistic world of , Jack Hill allegedly interviewed real-life female gang members before filming "Switchblade Sisters" in order to give small details an air of authenticity.
*While filming, the titles "Playgirl Gang" and "The Jezebels" were considered. Hill states in the DVD commentary that he figures not enough people would know what a Jezebel was, however. Thus, "Switchblade Sisters" was chosen, even though the phrase is not spoken in the movie.

*Hill and Tarantino liken Patch to an character in the commentary for the film.
*As Quentin Tarantino made efforts to have the film re-released, it clearly has affected his work. Most notably, the character in the "" films seems to be heavily influenced by Patch. Both are , one-eyed second-in-commands who become malicious upon the arrival of a newcomer — in this film, Maggie, and in "Kill Bill", Beatrix Kiddo.
*One of the warden's attendants — listed in the credits as "Matron #1" — is played by stuntwoman . Epper played the reverend's wife in the first segment of "". Her daughter Eurlyne also worked with Tarantino, playing a tag-along accomplice of drug dealer Lanna Frank (stuntwoman in the "" segment of "Grindhouse.)"
*Two of the actresses playing female gang members in this film — Robbie Lee and , who played Bunny — went on to do voicework for children's cartoons. Lee was the voice of several supporting characters in the original "" series and Karman provides the voice of Theodore of "".
*The film also features a young , who is today familiar to audiences as on "".
*Donut was portrayed by , daughter of .