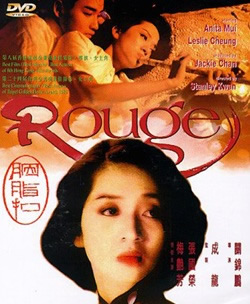 Chan Chen-Pang, better known as the "12th Young Master" (played by ), was a fashionable playboy who frequented the s prevalent in in , where he met the high-class and much sought-after , Fleur ().

They began a passionate love affair, something frowned upon by the family of 12th Master, who held sway over the business of the area. Clearly, their love was doomed when it was found out. Seeing no way to pursue their love in life, on at 11pm, the couple resolved to commit suicide together by swallowing opium, and promise to meet again in the afterlife. After waiting for Chan in hell for 50 years, Fleur returns to the world of the living to look for him, wondering why he has not emerged. A spirit now, she searches for her lover in a Hong Kong she no longer recognizes. She decides to place a newspaper advertisement seeking Chan (using the code "3811", to indicate the eighth day of the third month at eleven pm, the time of their suicide), and enlists the assistance of Yuen () and his understandably suspicious girlfriend, Chor ().

Fleur did find her lover in the end, but she was surprised, dismayed and felt cheated, as Chen-Pang did not die in the suicide pact. How he survived the suicide attempt was not explained, but Fleur seemed to have understood that he had not been entirely honest on his part. Not surprisingly, due to his wayward and flirtatious nature, he was reduced to poverty where he lived to be an old and forgotten man well into his late 70s, making a living as a stand-in and living in the cramped quarters of the opera set itself. Recognising Fleur instantly, he begged her for her forgiveness but his pleas fell on deaf ears. As she drifted effortlessly away, Fleur realised that he had indeed suffered much more than she had, as his guilty conscience haunted him for so many years. She returned the rouge case he gave her 50 years ago. Retribution has been paid in kind and she was content to leave as the living world is no longer her home.

* The film title "Rouge" refers to the cosmetic, which was a red strip used to colour the lips before the advent of the ; Fleur was shown using it at various times during the film. When they first met, 12th Master gave her a case of rouge as a love token,she returned it when she finally met him again 50 years later.

* Chan Chen-Pang isn't actually the 12th child of his father, but the second. "12th Master" is used to keep him safe from harm because his elder brother (1st Master) is dead and Chan Chen-Pang is therefore the heir to the family fortune. If the family has angered the spirits, or are unlucky, the second child could be the next to die.

* The role of Chan Chen-Pang was actually relatively minor in the book, but as Lilian Lee, the author and one of the scriptwriters, is very fond of Leslie, she decided to add more scenes for Chan.