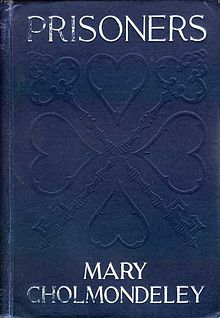 Cover of Prisoners, by Mary Cholmondeley, 1906

The daughter of the vicar at St Luke's Church in the village of Hodnet, Market Drayton, Shropshire, England, where she was born, Cholmondeley spent much of the first thirty years of her life taking care of her sickly mother. Members of her family were involved in the literary world, notably her uncle Reginald Cholmondeley of Condover Hall, who was a friend of the American novelist, Mark Twain.

Growing up, Cholmondeley liked to tell stories to her siblings and turned to writing fiction as an escape from the monotony of her daily routine. Her diary showed that by the age of 18 she was already convinced she would never marry, lacking, she believed, the looks and the charms necessary to attract a suitable mate. Novelist Rhoda Broughton introduced her to George Bentley of Richard Bentley and Son, prominent London book publishers who had published some of the early works of Charles Dickens.

Cholmondeley's first book was published under the title, Her Evil Genius and shortly thereafter in 1886, her second work The Danvers Jewels earned her a small, but respectable following. In 1896 her family moved to the village of Condover temporarily before settling permanently in London, where she wrote the 1899 satirical novel Red Pottage, for which she is best remembered.

Although shy because of her isolated background, she became friends with some of the well-known literary figures of the time and in addition to more than a dozen novels, Cholmondeley wrote essays, articles and short stories.

As she believed would happen, she died at age 66 without ever having married.