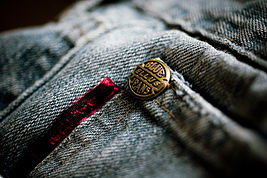 Denim as used for blue jeans, with a copper rivet to strengthen the pocket. 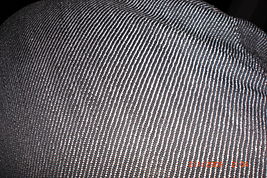 A high-resolution image of black denim.

Denim (French town of Nîmes, from which 'denim' (de Nîmes) gets its name) is a rugged cotton twill textile, in which the weft passes under two (twi- "double") or more warp threads. This produces the familiar diagonal ribbing identifiable on the reverse of the fabric, which distinguishes denim from cotton duck. Denim has been in American usage since the late 18th century.[1] The word comes from the name of a sturdy fabric called serge, originally made in Nîmes, France, by the André family. Originally called serge de Nîmes, the name was soon shortened to denim.[2] Denim was traditionally colored blue with indigo dye to make blue "jeans", though "jean" then denoted a different, lighter cotton textile; the contemporary use of jean comes from the French word for Genoa, Italy (Gênes), where the first denim trousers were made. 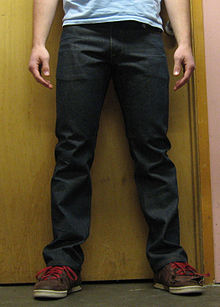 Dry denim can be identified by its lack of a wash, or "fade". It typically starts out as the dark blue color pictured here.

Dry or raw denim, as opposed to washed denim, is a denim fabric that is not washed after being dyed during its production. Over time, denim will generally fade, which is often considered desirable. During the process of wear, it is typical to see fading on areas that generally receive the most stress, which includes the upper thighs (whiskers), the ankles (stacks) and behind the knees (honey combs).

After being crafted into an article of clothing, most denim is washed to make it softer and to reduce or eliminate shrinkage, which could cause an item to not fit after the owner washes it. In addition to being washed, non-dry denim is sometimes artificially "distressed" to achieve a worn look.

Much of the appeal of factory distressed denim is that it looks similar to dry denim that has, with time, faded. With dry denim, however, such fading is affected by the body of the person who wears the jeans and the activities of his or her daily life. This creates what many enthusiasts feel to be a more natural, unique look than pre-distressed denim.

To facilitate the natural distressing process, some wearers of dry denim will often abstain from washing their jeans for more than six months, though it is not a necessity for fading.

Selvage on a pair of jeans

Selvage denim (alternative spelling: selvedge denim) is a type of denim, which forms a clean natural edge that does not unravel. It is commonly presented in the unwashed or raw state. Typically, the selvage edges will be located along the out-seam of the pants, making it visible when cuffs are worn.

The word "selvage" comes from the phrase "self-edge", the natural edge of a roll of fabric. As applied to denim, it means that which is made on old-style shuttle looms. These looms weave fabric with one continuous cross thread (the weft) that is passed back and forth all the way down the length of the bolt. As the weft loops back into the edge of the denim it creates this “self-edge” or selvage. Selvage is desirable because the edge cannot fray like denim made on a projectile loom that has separate wefts, which leave an open edge that must be stitched. This advantage is only realized on one edge of the fabric, however, as the fabric has to be cut to shape and anywhere it is cut the self-edge is lost.

Shuttle looms weave a narrower piece of fabric, and thus a longer piece of fabric is required to make a pair of jeans (approximately 3 yards). To maximize yield, traditional jean makers use the fabric all the way to the selvedge edge. When the cuff is turned up, the two selvedge edges (where the denim is sewn together) can be seen. The selvage edge is usually stitched with colored thread: green, white, brown, yellow, and (most commonly) red. Fabric mills used these colors to differentiate between fabrics.

Most selvage jeans today are dyed with synthetic indigo, but natural indigo dye is available in some denim labels. Though they are supposed to have the same chemical makeup, there are more impurities in the natural indigo dye. Loop dying machines feed a rope of cotton yarn through vats of indigo dye and then back out. The dye is allowed to oxidize before the next dip. Multiple dips create a deep dark indigo blue.

In response to increased demand for jeans in the 1950s, American denim manufacturers replaced the old shuttle style looms with modern projectile looms. The new looms produced fabric faster and wider (60 inches or wider). Synthetic dying techniques along with post-dye treatments were introduced to control shrink and twist.

Selvage denim is one of the more expensive denims because of its durability, and self-edge that will never fray.

Stretch denim usually incorporates an elastic component (such as elastane) into the fabric to allow a degree of give in garments. Only a small percentage is required within the fabric (approx 3%) to allow a significant stretch capacity of around 15%.

Besides trousers, denim can also be made into:

Between 1973 and 1975 Volkswagen produced the Jeans Beetle, which had all-denim trim. They also repeated this concept in some later models.[3] AMC offered a Levi's trim package for its Gremlin and Pacer models, which was actually spun nylon made to imitate denim. Jeep has also offered Levi's trim packages.