/ˈteɪl/)[1] can refer to any one of several weight measures of the Far East. Most commonly, it refers to the Chinese tael, a part of the Chinese system of weights and currency.

In Taiwan, Hong Kong, and Southeast Asia it is equivalent to 10 mace (qián 錢) or 1⁄16 catty,[2] [3]albeit with slightly different equivalents in metric in these two places. These Chinese units of measurement are usually used in the Chinese herbal medicine stores as well as gold and silver exchange.

The English word tael comes through Portuguese from the Malay word tahil, meaning "weight". Early English forms of the name such as "tay" or "taes" derive from the Portuguese plural of tael, taeis.

Tahil (/ˈtɑːhɪl/ in Singaporean English)[4] is used in Malay and English today when referring to the weight in Malaysia, Singapore, and Brunei where it is still used in some contexts especially related to the significant Overseas Chinese population.

In Chinese, tael is written 兩 (simplified Chinese: 两) and pronounced liǎng in Mandarin Chinese. In Chinese and Vietnamese, the phrase "half a catty, eight taels" (半斤八兩 and kẻ tám lạng người nửa cân, respectively), meaning two different presentations of the same thing (similar to the English phrase "Six of one and half-a-dozen of the other"), is still often used today. 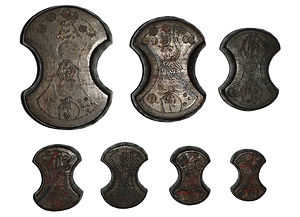 In China, there were many different weighting standards of tael depending on the region or type of trade. In general the silver tael weighed around 40 grams. The most common government measure was the Kùpíng (庫平 "treasury standard") tael, weighing 1.2057 Troy ounces (37.5 g). A common commercial weight, the Cáopíng (漕平 "canal shipping standard") tael weighed 1.18 Troy ounces (36.7 g) of marginally less pure silver.

As in China, Japan used the tael (両 ryō) as both a unit of weight and, by extension, a currency.

Traditional Chinese silver sycees and other currencies of fine metals were not denominated or made by a central mint and their value was determined by their weight in taels. They were made by individual silversmiths for local exchange, and as such the shape and amount of extra detail on each ingot were highly variable; square and oval shapes were common but "boat", flower, tortoise and others are known. The local tael also took precedence over any central measure, so the Canton tael weighed 37.5 grams, the Convention or Shanghai tael was 33.9 g (1.09 oz troy), and the Customs or Hǎiguān (海關) tael 37.8 g (defined as 11⁄3 oz avoirdupois, about 1.22 oz troy). The conversion rates between various common taels were well known. The tael was still the basis of the silver currency and sycee remained in use until the end of the Qing Dynasty in 1911. Common weights were 50 tael, 10 tael, and 5 down to 1.

Modern studies suggest that, on purchasing power parity basis, one tael of silver was worth about 4130 modern Chinese yuan in the early Tang Dynasty, 2065 in the late Tang Dynasty, and 660.8 in the mid Ming Dynasty[citation needed].

The Thai equivalent of the tael is known as the tamlueng, a term derived from Khmer. It was used as a unit of currency equal to four baht, and as a unit of weight is now standardised at 60 grams.

The tael is still in use as a weight measurement in a number of countries though usually only in limited contexts.

The Republic of China's standardised market tael (市两 shìliǎng) of 31.25 g was modified by the People's Republic of China in 1959. The new market tael was 50 g or 1⁄10 catty (500 g) to make it compatible with metric measures (see Chinese unit for details). In Shanghai, silver is still traded in taels.

Some foodstuffs in China are sold in units also called "taels", but which do not necessarily weigh one tael. For cooked rice, the weight of the tael is approximated using special tael-sized ladels. Other items sold in taels include the shengjian mantou and the xiaolongbao, both small buns commonly found in Shanghai. In these cases, one tael is traditionally four and eight buns respectively.

The Taiwan tael is 37.5 g and is still used in some contexts. Taiwan never adopted the Republic of China's market tael of 31.25 g;[clarification needed] its tael is derived from the tael or ryō of the Japanese system (equal to 10 momme) which was 37.5 g. Although the catty is still frequently used in Taiwan, the tael is only used for precious metals and medicines.

In French Indochina, the colonial administration standardised the tael (lạng) as 100 g, which is commonly used at food markets where many items typically weigh in the 100–900 g range. However, a different tael (called cây, lạng, or lượng) unit of 37.5 g is used for domestic transactions in gold. Real estate prices are often quoted in taels of gold rather than the local currency over concerns over monetary inflation. However, with gold price rising real estate price are now rarely quoted in gold anymore.