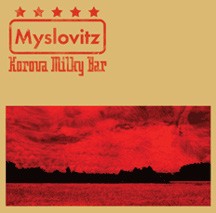 "Korova Milky Bar" is the fifth studio album by Polish band . It was released in 2002, and followed in 2003 by a release of the English version, which in fact included four songs from the band's previous album, "". The title of the album is a reference to the in 's classic screen version of "A Clockwork Orange".

Strikingly, the melancholic elements took over almost completely, with both music and lyrics creating an almost depressive overall mood. Nonetheless, the album sold even more copies than its predecessor had in the same time, with the singles "Acidland" and "Sprzedawcy marzeń" repeating the success of "Długość dźwięku samotności", Myslovitz's previous best-seller

The reason for the new material's popularity, as some critics surmised, was that its atmosphere closely conformed to a presumed resignative-recessive mood within Polish society at large – which guitarist Przemek Myszor seemed to confirm in an interview for the : "For us, the Korova Milky Bar is a place where something different may happen to your mind. It's a place like today’s Poland. You know, Poland is a place where very strange things happen to your mind. It's a country full of crisis and everything around you is very sad, very dark, very fucked. There is an economic crisis here. People don't have money, politics are fucked. The lyrics on our record are sad because of this. We sing a lot about being in a strange state of mind."

In November 2002, Myslovitz signed a new contract with 's Polish outlet , and released an English-language re-recording of "Korova Milky Bar". The album was released in 27 countries, including , the , , , , , , and .

Even before the album's release, "The Sound of Solitude"

On both albums, the last track contains two songs separated by a period of silence.