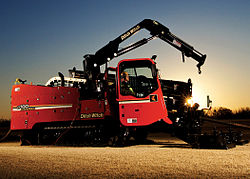 Directional boring, commonly called horizontal directional drilling or HDD, is a steerable trenchless method of installing underground pipes, conduits and cables in a shallow arc along a prescribed bore path by using a surface launched drilling rig, with minimal impact on the surrounding area. Directional boring is used when trenching or excavating is not practical. It is suitable for a variety of soil conditions and jobs including road, landscape and river crossings. Installation lengths up to 6,500’ (2,000m) have been completed, and diameters up to 56" (1,200mm) have been installed in shorter runs. Pipes can be made of materials such as PVC, polyethylene, polypropylene, Ductile iron, and steel if the pipes can be pulled through the drilled hole. Directional boring is not practical if there are voids in the rock or incomplete layers of rock. The best material is solid rock or sedimentary material. Soils with cobble stone are not recommended. There are different types of heads used in the pilot-hole process, and they depend on the geological material.

The equipment used in a directional drill operation depends on the size of the pipe, length of the run, and surrounding locations. For the large bores, a 100,000-pound pulling power drill is used with a reclaimer, excavator, and multiple pumps and hoses to move the fluid. The drilling steel is a 3-in. diameter pipe with male and female threads. The head of the operation comes in multiple designs and depends on the rock or soil being penetrated. The drilling head has multiple water ports to allow removal of material. A talon bit involves the carbide-tipped cutters. These allow for steering and cutting the material. Another head is a mud-motor that is used in rocky landscapes.

The technique has extensive use in urban areas for developing subsurface utilities as it helps in avoiding extensive open cut trenches. The use requires that the operator have complete information about existing utilities so that he can plan the alignment to avoid damaging those utilities. Since uncontrolled drilling can lead to damage, different agencies/government authorities owning the urban right-of-way or the utilities have rules for safe work execution. For standardization of the techniques, different trenchless technology promoting organizations have developed guidelines for this technique. 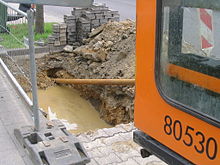 The process starts with receiving hole and entrance pits. These pits will allow the drilling fluid to be collected and reclaimed to reduce costs and prevent waste. The first stage drills a pilot hole on the designed path, and the second stage enlarges the hole by passing a larger cutting tool known as the back reamer. The reamer's diameter depends on the size of the pipe. The driller increases the diameter according to the material being cut and to achieve optimal production. The third stage places the product or casing pipe in the enlarged hole by way of the drill steel; it is pulled behind the reamer to allow centering of the pipe in the newly reamed path.

Horizontal directional drilling is done with the help of a viscous fluid known as drilling fluid. It is a mixture of water and, usually, bentonite or polymer continuously pumped to the cutting head or drill bit to facilitate the removal of cuttings, stabilize the bore hole, cool the cutting head, and lubricate the passage of the product pipe. The drilling fluid is sent into a machine called a reclaimer which removes the drill cuttings and maintains the proper viscosity of the fluid. 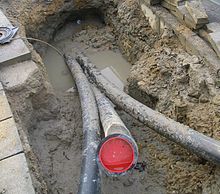 Location and guidance of the drilling is an important part of the drilling operation, as the drilling head is under the ground while drilling and, in most cases, not visible from the ground surface. Uncontrolled or unguided drilling can lead to substantial destruction, which can be eliminated by properly locating and guiding the drill head.

There are three types of locating equipment for locating the bore head: the walk-over locating system, the wire-line locating system and the gyro guided drilling, where a full inertial navigation system is located close to the drill head. In first both systems a sonde, or transmitter, behind the bore head registers angle, rotation, direction, and temperature data. This information is encoded into an electro-magnetic signal and transmitted through the ground to the surface in a walk-over system. At the surface a receiver (usually a hand-held locator) is manually positioned over the sonde, the signal is decoded and steering directions are relayed to the bore machine operator. In a wire-line system, this information is transmitted through the cable fitted within the drill string. Those both systems have their own merits, and a particular system is chosen depending upon the site requirements. The gyro based system is fully autonomously working and therefore one of the most accurate system where sufficient diameter (200 mm) is available and where long distances (up to 2 km) have to be performed with small deviation (less than 1 m posiition error).