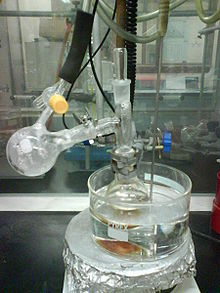 At atmospheric pressure, dimethyl sulfoxide boils at 189°C. Under a vacuum, it distills off into the connected receiver at only 70°C.

There are many laboratory applications for vacuum distillation as well as many types of distillation set-ups and apparatuses.

Safety is an important consideration when using glassware as part of the set-up. All of the glass components should be carefully examined for scratches and cracks which could result in implosions when the vacuum is applied. Wrapping as much of the glassware with tape as is practical helps to prevent dangerous scattering of glass shards in the event of an implosion.

Rotary evaporation[5] is a type of vacuum distillation apparatus used to remove bulk solvents from the liquid being distilled. It is also used by environmental regulatory agencies for determining the amount of solvents in paint, coatings and inks.[6]

Rotary evaporation set-ups include an apparatus referred to as a Rotovap which rotates the distillation flask (sometimes called the still pot) to enhance the distillation. Rotating the flask throws up liquid on the walls of the flask and thus increases the surface area for evaporation.

Heat is often applied to the rotating distillation flask by partially immersing it in a heated bath of water or oil. Typically, the vacuum in such systems is generated by a water aspirator or a vacuum pump of some type.

Some compounds have high boiling point temperatures as well as being air sensitive. A simple laboratory vacuum distillation glassware set-up can be used, in which the vacuum can be replaced with an inert gas after the distillation is complete.

However, this is not a completely satisfactory system if it is desired to collect fractions under a reduced pressure.

The Perkin-triangle set-up (Image 5) uses a series of Teflon valves to allow the distilled fractions to be isolated from the distillation flask without the main body of the distillation set-up being removed from either the vacuum or the heat source, and thus can remain in a state of reflux.

To do this, the distillate receiver vessel is first isolated from the vacuum by means of the Teflon valves.

The vacuum over the sample is then replaced with an inert gas (such as nitrogen or argon) and the distillate receiver can then be stoppered and removed from the system.

When assembling the set-up apparatus, all of the connecting lines are clamped so that they cannot pop off.

Once the apparatus is assembled, and the liquid to be distilled is in the still pot, the desired vacuum is established in the system by using the vacuum connection on the short-path distillation head. Care is taken to prevent potential "bumping" as the liquid in the still pot degases.

While establishing the vacuum, the flow of coolant is started through the short-path distillation head. Once the desired vacuum is established, heat is applied to the still pot.

If needed, the first portion of distillate can be discarded by purging with inert gas and changing out the distillate receiver.

A second advantage of vacuum distillation is the reduced temperature requirement at lower pressures. For many systems, the products degrade or polymerize at elevated temperatures.

Vacuum distillation can improve a separation by:

Petroleum crude oil is a complex mixture of hundreds of different hydrocarbon compounds generally having from 3 to 60 carbon atoms per molecule, although there may be small amounts of hydrocarbons outside that range.[10][11][12] The refining of crude oil begins with distilling the incoming crude oil in a so-called atmospheric distillation column operating at pressures slightly above atmospheric pressure.[8][10][11]

The constraint imposed by limiting the column inlet crude oil to a temperature of more than 370 to 380 °C yields a residual oil from the bottom of the atmospheric distillation column consisting entirely of hydrocarbons that boil above 370 to 380 °C.

To further distill the residual oil from the atmospheric distillation column, the distillation must be performed at absolute pressures as low as 10 to 40 mmHg (also referred to as Torr) so as to limit the operating temperature to less than 370 to 380 °C.

The 10 to 40 mmHg absolute pressure in a vacuum distillation column increases the volume of vapor formed per volume of liquid distilled. The result is that such columns have very large diameters.[13]

The vacuum distillation column internals must provide good vapor-liquid contacting while, at the same time, maintaining a very low pressure increase from the top of the column top to the bottom. Therefore, the vacuum column uses distillation trays only where withdrawing products from the side of the column (referred to as side draws). Most of the column uses packing material for the vapor-liquid contacting because such packing has a lower pressure drop than distillation trays. This packing material can be either structured sheet metal or randomly dumped packing such as Raschig rings.

The absolute pressure of 10 to 40 mmHg in the vacuum column is most often achieved by using multiple stages of steam jet ejectors.[14]

Many industries, other than the petroleum refining industry, use vacuum distillation on a much a smaller scale.

Molecular distillation is vacuum distillation below the pressure of 0.01 torr.[15] 0.01 torr is one order of magnitude above high vacuum, where fluids are in the free molecular flow regime, i.e. the mean free path of molecules is comparable to the size of the equipment. The gaseous phase no longer exerts significant pressure on the substance to be evaporated, and consequently, rate of evaporation no longer depends on pressure. That is, because the continuum assumptions of fluid dynamics no longer apply, mass transport is governed by molecular dynamics rather than fluid dynamics. Thus, a short path between the hot surface and the cold surface is necessary, typically by suspending a hot plate covered with a film of feed next to a cold plate with a line of sight in between. Molecular distillation is used industrially for purification of oils.

This article incorporates material from the Citizendium article "Vacuum distillation", which is licensed under the Creative Commons Attribution-ShareAlike 3.0 Unported License but not under the GFDL.