Sentinel Prime is the name of several in the various . 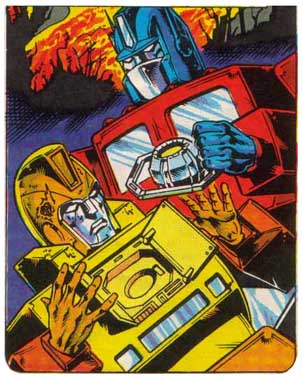 Sentinel Prime originates from the original Transformers series. Sentinel is the immediate predecessor of , and was killed in battle on . He is glimpsed in issue #150 of the comic, passing the on to Optimus Prime. It was not made clear in this continuity who or what caused his death. His appearance resembles .

His name is taken from issue U.S. #65 (UK #290) in which all the past Matrix holders are listed and he precedes Optimus Prime.

Sentinel Prime died during the early stages of the civil war on Cybertron, supposedly killed by in single combat. In this continuity, at the time of his death, Sentinel Prime was not in possession of the Matrix. (Ref: "" Vol. 1, Issue 1).

Little else is known about this Autobot leader — the only image of him is a yellow hand as seen in the first issue of ' "The War Within". When Megatron later battled Optimus Prime for the first time, he states that Sentinel tried to talk him out of his evil ways.

Sentinel Prime receives a bit more history in the 's 4-issue miniseries, "". After Megatron's attack on an senator and subsequent escape, current Autobot leader, Sentinel Prime vowed to hunt them down, despite his lack of concern over the senator's fate. Sentinel took a direct interest in the underground bloodsports that Megatron was involved in, determined to shut them down and declared that Megatron "will hang". Megatron's followers were eventually captured by Sentinel's forces and Sentinel taunts Megatron before imprisoning him. However, the apprehension of the Decepticons turned out to be part of Megatron's ruse. and Soundwave killed the Autobot Senate, and a full scale revolution erupted in Kaon. Desperate to stop them, Prime donned Apex armor and confronted Megatron, but was defeated and beaten to within an inch of life by the Decepticon leader. Note: Sentinel's name was initially spelled as "Sentinal" Prime, later revealed to be a mis-print introduced at the lettering phase.

A glimpse of Sentinel Prime was also seen in "" issue featuring . He is again the Matrix-holder preceding Optimus Prime, and succeeding . In bonus art following the story, Sentinel's alternate mode was revealed as a yellow and orange Cybertronian truck.

caption =Sentinel Prime Earth vehicle mode
affiliation =Autobot
subgroup =Deluxe Vehicles
rank =
function =Autobot Elite Commander
partner =
motto ="Without law, all is chaos."
alternatemodes =Cybertronian Truck
Snowplow Truck
series =
engvoice =
japanvoice =In the series , Sentinel Prime is a hotheaded member of the Cybertron Elite Guard. Sentinel's main weapon is a that is able to generate force fields and can be used offensively when thrown. He also wields a laser lance, and can activate a battle mask when needed.

In December 2007 drawings were leaked on the internet of Sentinel Prime's vehicle appearance in the television series. He turns into a truck. [ [http://seibertron.com/energonpub/viewtopic.php?f=23&t=33852 Seibertron.com - The Ultimate Transformers Resource ] ] Derrick Wyatt stated that the character was originally meant to be named , after Optimus Prime's G1 Succesor. However, the idea of Rodimus being portrayed as arrogant and rude was dropped in favor of Sentinel Prime. An interesting note is that Sentinel's robot mode looks a lot like , which was a result of (the voice of the Tick) being cast in the role.

Once known as Sentinel Minor, he was the drill sergeant training Bumblebee, Wasp, Bulkhead, Longarm and , who were recruited into the Autobots. When it appeared that Wasp was a secret Decepticon spy Sentinel Prime arrested the innocent Autobot, not realizing it was Longarm who was the traitor.

Both Sentinel Prime and have been rivals since they attended the Autobot Academy together with (whom Sentinel had feelings for) as seen in a flashback in "Along Came a Spider." Things changed when Sentinel brought the others to an organic planet to find a lost Decepticon warship, only to be attacked by giant alien spiders that inhabited the planet and the ship exploded during the confrontation. In spite of Sentinel's pleas, Optimus was forced to leave Elita One on the notion that she was killed in the explosion, both unaware of her transformation to . Since then, Sentinel never forgave Optimus for the incident and developed a racial fear of organics, believing that they'd all be the same as those spiders.

When Optimus tried to contact Autobot High Command, Sentinel refused to allow him to see Ultra Magnus until Optimus showed him the .

Sentinel Prime (alongside and Jazz) arrived on Earth to look for the Allspark. He has Prime's crew "decontaminated" from organic infestation. He doesn't believe Prime's stories about the Allspark being destroyed or their encounters with Decepticons. He did end up attempting to fend off the on Dinobot Island when he provoked them. After the incident at one of the factories owned by Isaac Sumdac (in which the fragment of the Allspark was the cause of this), Sentinel Prime threatened to make sure Optimus was charged with treason for destroying the Allspark, however Optimus had grown tired of Sentinel's arrogance and reminded him despite being an Elite Guard washout, he and Sentinel still shared equal rank and told him he was on "his" turf now". Ultra Magnus stated to Sentinel Prime that he can learn a lot of things from Optimus Prime, such as loyalty.

In "Return of The Headmaster", Sentinel Prime gets a lesson in humility after his body is taken by the Headmaster and he is forced into a partnership with Optimus to get it back.

In order to improve morale, Sentinel tried to force Optimus Prime to declare that they hadn't encountered any Decepticons, but Optimus refused to do so. Sentinel then tried to bribe him with re-entry into the Elite Guard; when he didn't comply, he placed Optimus into custody. Sentinel later refused to believe that Ultra Magnus and Jazz were walking into a Decepticon trap, so Optimus tricked him into a pair of stasis cuffs in order to save the day. Sentinel soon learned Prime was telling the truth when fell from the sky. It was shown he choked up under pressure and fear at the sight of a Decepticon.

Sentinel appears again in flashback portions of "Autoboot Camp" as Sentinel Minor. He the drill sergeant of the Autobot Boot Camp at the time Bumblebee, Bulkhead, , Longarm and all attempt to join. He gives each their names based on their abilities, and later seen arresting the Autobot traitor Wasp. At this time he is seen using his original cybertronian vehicle mode, as this predates his arrival on Earth. He is also seen to be friends with Cliffjumper.