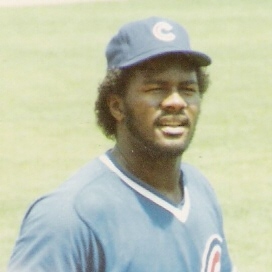 Lee Arthur Smith (born December 4, 1957) is a retired American right-handed who played for eight teams in from 1980 to 1997. A native of Castor, , Smith was scouted by and drafted by the in the 1975 . In his 18-year major league career, Smith's longest tenure with any one team was with the Cubs, with whom he spent his first eight seasons. One of the dominant closers in baseball history, Smith held the major league record for career saves from by|1993 until by|2006, when relief pitcher passed his final total of 478. [cite web |url=http://sandiego.padres.mlb.com/news/press_releases/press_release.jsp?ymd=20061004&content_id=1699099&vkey=pr_sd&fext=.jsp&c_id=sd |title= Padres closer Trevor Hoffman to catch ceremonial first pitch delivered by Lee Smith prior to Thursday's game|accessdate=2007-05-08|date=|last=|first=|publisher=] Smith was known as an intimidating figure on the pitcher's mound at 6 feet, 6 es (1.98 m) and 265 pounds (120 kg) with a 95 mile per hour (150 km/h) .

In by|1991, Smith set a record with 47 saves for the , and was runner-up for the league's ; it was the second of three times he led the NL in saves, and he later led the once while with the in by|1994. He also set the major league career record for (802), and his 1,022 career were the third most in history when he retired; he still holds the team records for career saves for the Cubs (180), and he also held the Cardinals record (160) until 2006. Smith has been a candidate for induction into the Baseball Hall of Fame five times since 2003, but has generally received 37-45% of the necessary votes on all total ballots cast by the , with 75% needed for election. After the end of his major league career, Smith spent time working as a pitching instructor at the minor-league level with the . He then served as the pitching coach for the in the and afterwards continued his previous job as a minor-league roving pitching instructor for the Giants.

Lee Smith was born in Shreveport, , and raised in the small town of Castor in Bienville Parish. claimed credit for having scouted him; at age 17, partly on O'Neil's recommendation, Smith was drafted in the second round as the 28th overall pick by the Chicago Cubs in the 1975 Major League Baseball Draft. [cite book | last=Vincent | first=Fay |authorlinks=Fay Vincent| title=On Baseball | publisher= | location=New York, New York | year = 2006|isbn=0-7432-8864-5 | pages=p80]

Smith made his major league debut with the Cubs on September 1, by|1980 against the , coming in relief for starting pitcher , who had given up four runs and eight hits in the four innings he pitched. Smith pitched one inning, giving up no hits, striking out one and walking two.

The Cubs' closer for 1981, , had a 3–10 season with a 5.06 ERA, and as a result, in 1982 Smith, and Bill Campbell shared closing duties. Smith pitched well and even started five games from mid-June to early July. [cite web|url=http://www.baseball-reference.com/pi/gl.cgi?n1=smithle02&t=p&year=1982 |title= Lee Smith 1982 Pitching Gamelogs|accessdate=2007-05-07|last=|first=|publisher=Sports Reference, Inc.] Significantly, former Cubs star pitcher returned to the team in 1982, and became a major influence on the young reliever; Smith credited Jenkins with simplifying his delivery, introducing him to the and , and teaching him how to set up hitters.

In 1983, Smith had his best season in the majors up to that point. By May 6, he had pitched in ten games without allowing any runs while allowing only three hits and striking out twelve batters. [cite web|url=http://www.baseball-reference.com/pi/gl.cgi?n1=smithle02&t=p&year=1983 |title= Lee Smith 1983 Pitching Gamelogs|accessdate=2007-05-07|last=|first=|publisher=Sports Reference, Inc.] His ERA rose to 1.85 by the end of May, but he lowered it to 1.15 in July. Smith was selected for his first All-Star Game but did not fare well, surrendering the final two runs in the 's 13–3 rout. [cite web|url=http://retrosheet.org/boxesetc/1983/B07060ALS1983.htm |title= July 6, 1983 All-Star Game - American League vs. National League|accessdate=2007-05-07|last=|first=|publisher=Retrosheet] Although the Cubs continued losing, Smith finished with a career-best 1.65 ERA—more than two points below the league average—and a career-best 1.074 WHIP

The by|1984 Cubs were the best team Smith pitched for in his career. While they finished with the franchise's best record and had their first postseason appearance since 1945, [cite web |url=http://chicago.cubs.mlb.com/chc/history/timeline10.jsp|title= History: Cubs Timeline|accessdate=2007-05-07|last=|first=|publisher=] Smith compiled his worst ERA of the decade—although he saved more than 30 games for the first time in his career. In Game 2 of the NL Championship Series, Smith recorded two outs for the save to give Chicago a 2–0 lead in the best-of-five series against the , putting them one win away from the . [cite web|url=http://www.retrosheet.org/boxesetc/1984/B10030CHN1984.htm|title= October 3, 1984 Game 2 of the NLCS - Chicago Cubs vs. San Diego Padres|accessdate=2007-05-07|last=|first=|publisher=Retrosheet] In Game 4, the score was tied when Smith began the eighth inning. After a scoreless eighth and a strikeout to start the bottom of the ninth, Smith allowed a one-out ninth-inning single to , and followed with a two-run homer to force Game 5. [cite web|url=http://www.retrosheet.org/boxesetc/1984/B10060SDN1984.htm|title= October 6, 1984 Game 4 of the NLCS - Chicago Cubs vs. San Diego Padres|accessdate=2007-05-07|last=|first=|publisher=Retrosheet] The Cubs led that game in the seventh inning, but the underdog Padres scored four runs and won a trip to the World Series. It would be the Cubs' only winning season in Smith's eight years with the team.

In 1985, Smith for the first time dominated the league in strikeouts as a relief pitcher. After averaging fewer than eight in each prior season, he improved to 10.32 in 1985. He finished the season with a career-high 112 strikeouts in only 97.2 innings. Meanwhile, the Cubs were in first place until a 13-game losing streak from June 12 to June 25 from which they never recovered. [cite web |url=http://www.baseball-reference.com/teams/CHC/1985_sched.shtml|title=1985 Chicago Cubs Schedule, Box Scores and Splits|accessdate=2007-05-07|last=|first=|publisher=Sports Reference, Inc.]

With his 30th save in by|1987, Smith became only the second pitcher (joining ) to reach the mark in four consecutive seasons. Even before then, he was known as one of the most feared relief pitchers in the game. One player told writers Bruce Nash and Allan Zullo for their book, "Baseball Confidential," that one of the most daunting sights in the majors was Smith throwing "pure gas from the shadows" of , which didn't have lights at the time.

Despite his numbers, rumors were swirling about his weight and its effect on his knees and his request for a trade out of Chicago.

After losing the to the , the Red Sox compiled a winning percentage below .500 for 1987. [cite web|url=http://www.baseball-reference.com/teams/BOS/1987.shtml|title=1987 Boston Red Sox Statistics and Roster|accessdate=2007-01-07|last=|first=|publisher=Sports Reference, Inc.] One of the main problems was a weak , and Smith was brought in to rectify the relief problems.

Despite giving up a game-winning home run in his 1988 debut, Smith posted his best ERA in five years. [cite web|url=http://www.baseball-reference.com/boxes/BOS/BOS198804040.shtml|title= April 4, 1988 Boston Red Sox vs. Detroit Tigers game|accessdate=2007-01-07|last=|first=|publisher=Sports Reference, Inc.] The Red Sox had the good fortune of being in the American League's Eastern division; in September, they caught the and held off every other team to clinch Smith's second and last trip to the postseason. In Game 2 of the 1988 ALCS against the , Smith gave up three singles, including ' game-winning RBI single, in the ninth inning of a tied game. [cite web|url=http://www.retrosheet.org/boxesetc/B10060BOS1988.htm|title= October 6, 1988 Game 2 of ALCS - Boston Red Sox vs. Oakland Athletics|accessdate=2007-01-07|last=|first=|publisher=Retrosheet] Boston had a 0–2 series deficit going to Oakland. After Boston lost Game 3, Smith surrendered two insurance runs after entering Game 4 with the score 2–1 to complete the four-game sweep. [cite web |url=http://www.retrosheet.org/boxesetc/B10090OAK1988.htm|title= October 9, 1988 Game 4 of ALCS - Boston Red Sox vs. Oakland Athletics|accessdate=2007-01-07|last=|first=|publisher=Retrosheet]

Smith's salary rose to over $1.4 million, but he followed his 1988 season with a mediocre 1989, finishing with his worst ERA in five years. For the seventh consecutive season, his number of innings pitched decreased or remained the same. However, he compiled 12.23 strikeouts per nine innings, nearly two higher than any other season of his career. It was also the last of his four seasons with more than 10 strikeouts per nine innings.

Smith's statistics for the 1980s gave him a valid claim as the best reliever of the decade, although he was rivaled by . While Smith had four consecutive 30-save seasons, Reardon finished the decade with five consecutive.

In the early 1990s, records were falling quickly for closers. Lee Smith set the single-season National League record for saves in 1991 and was on pace to break his own record in 1992. However, he fell four short of his record, which was broken the following season by . In 1992, Smith's former teammate, Jeff Reardon, broke the career saves record held for over a decade by Hall of Famer .

The Yankees were just 1½ the when they acquired Lee Smith, and he pitched nearly perfectly for the last month of the season. In eight games, Smith did not allow a single run and picked up three saves and 11 strikeouts. [cite web|url=http://www.baseball-reference.com/pi/gl.cgi?n1=smithle02&t=p&year=1993
title=Lee Smith 1993 Pitching Gamelogs|accessdate=2007-05-07|last=|first=|publisher=Sports Reference, Inc.] The Yankees as a team, however, did poorly during the remainder of the season, and Toronto easily pulled away to win the division. Smith's New York career lasted just those eight games as he filed for free agency after the season. [cite web|url=http://www.baseball-reference.com/teams/NYY/1993_trans.shtml
title=1993 New York Yankees Trades and Transactions|accessdate=2007-05-07|last=|first=|publisher=Sports Reference, Inc.] He signed with Baltimore for 1994 for $1.5 million plus incentives.

For 1996, the Angels replaced Smith in the closer role with second-year pitcher . After only eight games as a setup pitcher, Smith, who was unhappy in California, was traded to Cincinnati for on May 27.

He was picked up by the Montreal Expos in the following season for only $400,000 and had his worst season of his career. His last game of the season was two innings of relief during extra innings of an all-Canada interleague game (sometimes called the ) won by Toronto on July 2. [cite web|url=http://retrosheet.org/boxesetc/1997/B07020TOR1997.htm|title=July 2, 1997 Game - Toronto Blue Jays vs. Montreal Expos|accessdate=2007-05-07|last=|first=|publisher=Retrosheet] It turned out to be the last game of his major league career. On July 15, 1997, Lee Smith announced his retirement.

After posting career-worsts in ERA (5.82), (11.63) and several other statistics and then announcing his retirement in mid-July, Smith was released by the Expos on September 25, by|1997. [cite web|url=http://www.baseball-reference.com/teams/MON/1997_trans.shtml
title=1996 Montreal Expos Trades and Transactions|accessdate=2007-05-07|last=|first=|publisher=Sports Reference, Inc.] Regardless, the signed Smith as a free agent and invited him to for 1998. When he refused to start the season in the minor leagues, the Royals released him. Later in 1998, he signed a minor league deal with the , but with an ERA near 7.00 at AAA, he retired from the majors again.

Two years after his retirement in 1998, Smith went to work as a roving minor-league pitching instructor for the San Francisco Giants. A former teammate, Dick Tidrow, and the manager of the Double-A Shreveport Captains, Jack Hiatt, offered the job to Smith, who gladly agreed, since it was right in his hometown. Smith still held this job with the Giants as of 2007. [cite web
url=http://sanfrancisco.giants.mlb.com/news/article.jsp?ymd=20070129&content_id=1789245&vkey=news_sf&fext=.jsp&c_id=sf|title=Giants finalize Minors coaching staffs|accessdate=2007-10-13|date=|publisher=]

In the 2006 World Baseball Classic, Smith served as the pitching coach of the South Africa national baseball team, which was given 20,000 to 1 odds of winning the tournament.

In 1995, Pulitzer Prize-winning sportswriter Jim Murray selected Lee Smith as the active player most likely to be elected to the Baseball Hall of Fame, describing him as "the best one-inning pitcher the game ever saw," and "the best at smuggling a game into the clubhouse in history."

At Sutter's July 2006 induction to the Hall, Smith talked with reporters about his chances for election. Like many others, he commented that he was puzzled that he had not yet been selected. "This confuses the hell out of me. But I've always been baffled by it," he said.