Greasy pole or grease pole refers to a pole that has been made slippery and thus difficult to grip. More specifically, it is the name of several events that involve staying on, climbing up, walking over or otherwise traversing such a pole. This kind of event exist in several variations around the world. 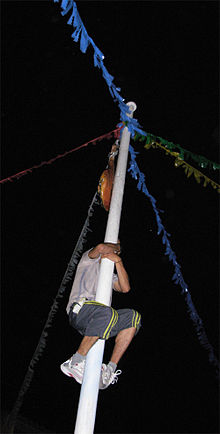 In the UK, contests to climb a greasy pole were held at numerous fairs including the Crab Fair in Egremont, Cumbria where the contest continues to this day - alongside the annual Gurning World Championships see Gurn. The prize for climbing the 30 foot pole was originally a hat but from 1852 became a side of mutton - which if there are no winners is cut up and distributed to the poor. Since 2004 the greasy pole has been discontinued as an event at Egremont Crab Fair, due to high insurance cover costs, should a participant fall from the pole.

As of the 19th of January 2008 Egremont is the proud home of the new Greasy Pole. A 30 ft Sculpture by Turner Prize Winning artisit Jeremy Deller and collaborator Alan Kane. This is the teams first piece of public art and marks the re-introduction of the Greasy Pole as a crab fair event.

The phrase 'to climb the greasy pole' means reaching the upper echelons of any hierarchy but usually refers to politics.

A slight variation is provided at the annual Seaview Regatta on the Isle of Wight. Here the greasy pole is horizontal over the sea and competitors walk along it, the one who walks the furthest before falling into the sea is the winner. 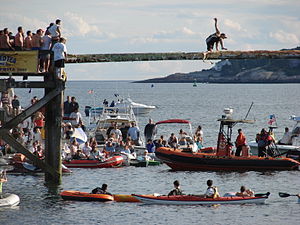 A man attempts to reach the flag during the courtesy round on Sunday, July 1, 2007.

The Greasy Pole Contest takes place every year during St. Peter's Fiesta in Gloucester, Massachusetts. During this time, many young men try their luck at walking down a greased, wooden pole in the middle of Gloucester Harbor. The goal is to be the first person to grab the red flag at the end of the pole.

The idea behind The Greasy Pole competition came from Sicily in the 1920s while Italians were immigrating to America. In Sicily, however, the object is to walk across a greased pole protruding from a platform about 200 ft from shore. This platform, depending on the tide, can be anywhere from 10–25 ft above the water. The pole, which hangs over the water, is 45 feet long, and only about as wide as a standard telephone pole. This pole is then heavily greased with biodegradable axle grease mixed with anything from Tabasco sauce to oil, banana peels, and various other slippery objects. A red flag (or sometimes the Italian Flag with a red flag underneath it) is then nailed to the very end of the pole. The idea is to run out on the heavily greased pole and try to grab the flag before slipping and falling into the water. Somewhere between 40-50 men aging anywhere from 18–60 go out from Pavilion Beach in Gloucester Ma on June 25th, 26th, and the 27th Friday Saturday and Sunday and wait on the platform. Then they walk the pole one at a time in a pre-determined order. Generally, the men are of Italian, Portuguese or Irish decent, although if you walk in honor of a past walker you don't necessarily have to be.

The first round of the Greasy Pole is dubbed as the "Courtesy Round." This is done so that all the walkers get a chance to walk the pole. Generally, this is used to get a feel for exactly how greasy the pole really is. Some of the more experienced walkers only walk out a small distance and then dive off the pole into the water to save themselves from injury. Once all the walkers participating have walked, the second round begins. After the courtesy round is over, the flag can come down at any time. There are three days in which the Greasy Pole is competed: 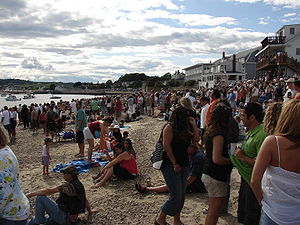 Most of the newcomers to the Greasy Pole event walk on Friday. The winner of the Friday Greasy Pole will walk first on Saturday.

Also referred to as Championship Sunday. The winner of Saturday walks first, and on the platform are the former Saturday and Sunday champions of the Greasy Pole from years past and protégés of the former champions who can no longer walk because they have died or can no longer walk for health reasons. Winning on Fiesta Sunday is the most prestigious honor that a Greasy Pole walker can achieve, and every year they return to walk on Fiesta Sunday.

Generally speaking, the Greasy Pole is done for bragging rights. A trophy is given out to the winner, but in the close knit town of Gloucester where everyone knows each other, this is done for the right to say "I won." (free drinks all night at all the bars)

This is obviously a very risky event. Walking through an almost frictionless environment anywhere from 10–25 feet over water on a very narrow pole can be dangerous. Several injuries, most of them minor, can and have occurred. These injuries can range from scrapes and bruises to broken facial bones or ribs from falling and landing on the pole. Police boats are nearby to assist if someone is seriously injured and needs to be taken to the hospital.

To help raise some of the money needed to replace the greasy pole platform that was damaged by tropical storm Irene, the Saint Peter's Fiesta Committee hosted the 2011 Greasy Pole Fall Classic at Gloucester High School's Newell Stadium. The competition featured three greasy pole's, designated bronze, silver and gold. The two time champ Joe DaSilva is the only person to ever win on sea and land. They call it the surf and turf champion.

In 2009, CoffeeBlack Productions- the Gloucester filmmaking team of Emile Doucette, Thomas Papows, and Michael Pallazola - created a short 7 min documentary about the Greasy Pole and its cultural significance in the small fishing community of Gloucester, Massachusetts. [1] The film won the Documentary Educational Resources Award at the International Documentary Challenge at the Hot Docs Canadian International Documentary Film Festival.[5] The group has plans to make a feature length version of the film due out in 2010.

As part of Queen's Engineering Frosh Week, the incoming first year engineering students must, with the help of the upper-year engineering students, climb to the top of a grease pole and remove a tam which is nailed to the pole's top. The Queen's Grease Pole is a metal football goalpost stolen by Queen's engineering students in 1955 from University of Toronto's Varsity Stadium.[6] Currently, the pole is covered in lanolin and placed in the centre of a pit of muddy water referred to as the "Grease Pit", but from the first climbing of the pole in 1956 to 1988 the pole was covered in axle grease and it was only sometime between 1957 and 1967 that the pit was added to the event. There have been various other changes to the rules of the event since its inception, including the banning of the throwing of projectiles at the frosh attempting to climb the pole by upper years, removing unsanitary contents from the pit and allowing women to participate.[7]