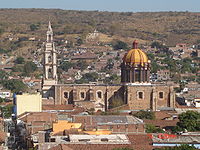 Cotija is a municipality located in the Mexican state of Michoacán. The municipality has an area of 504.05 square kilometres (0.91% of the surface of the state), and is bordered to the north by Jiquilpan and Villamar, to the east by Tocumbo, and to south by the state of Jalisco. The municipality had a population of 18,207 inhabitants according to the 2005 census.[1] Its municipal seat is the city of Cotija de la Paz (pop. 12,453).[2]

Cotija is a quiet, sleepy town, and the birthplace of many religious figures, including Saint Rafael Guízar Valencia and Father Marcial Maciel. Its narrow, peaceful streets lead to the center of town, where an imposing church of astonishing beauty awaits. The town offers several well-preserved colonial (mainly religious) buildings. A short walk to the many surrounding hills offers breath-taking views of the city with its narrow streets and red-tile roofs topped off with its imposing church. For a minute, one may think that one is watching a piccolo villaggio in Tuscany, Italy. The men and women of Cotija are of deep religious faith, which has been manifested in various pious traditions and in the flowering of priestly and religious vocations. Six bishops have been born and raised in this small town. Nearby is also located the San Juanico Lake and historical Ayumba Hacienda.

The Cotija cheese put the name of Cotija on the world map.[3]

The economy of the municipality is mostly based on agriculture and ranching.[4]

The municipal president of Cotija and its many outlying communities is José Mendoza Morfín in 2008.[5]

Different versions exist regarding the exact date of the founding of Cotija. Nevertheless, the Reverend Jose Romero Vargas dedicated several years of his life to the historical investigation of this, which was his birthplace. The following is what Father Romero determined to be the most possible and truthful version on the foundation of the City of Cotija. Between 1575 and 1576, in a site called Cotixa, which was situated near the Rio Claro (Clear River), Mr. Melchor Manzo de Corona built what became the first Spanish settlement in the region. From 1581 to 1595, 11 other Spanish colonists joined Corona in Cotixa. Some built their houses, and with perseverance, they attempted to make a living by raising cattle. As the years passed, other Spanish families arrived. At the time, this Spanish settlement was known as the Rincon de Cotixa (Cotixa Nook) and Mr. Melchor Manzo’s hacienda was considered the heart of the settlement. A primitive chapel was constructed in honor of Our Lady of the Pópolo, where a flea market (tianguis) was held on Sundays. By 1730, the chapel of the Rincon de Cotixa had a standing priest, but baptisms, marriages and burials were not allowed. Therefore, it was necessary to travel to the town of Tinguidin for those religious affairs. This situation was not remedied until November 1740, when the Bishop of Michoacán, Fr. Marks Ramirez of the Prado, gave permission to the chapel of the Rincon de Cotixa to perform ecclesiastical burials. Between August 2nd and 5th, 1759, the Honorable Francisco Antonio de Echavarri decreed that the Rincon de Cotixa and the Llano of Titiacoro would be united forever under a single name, and was officially renamed as the Congregation of Cotija. In 1790, Cotija was elevated to the status of a city by Michoacán governor, Aristeo Mercado.