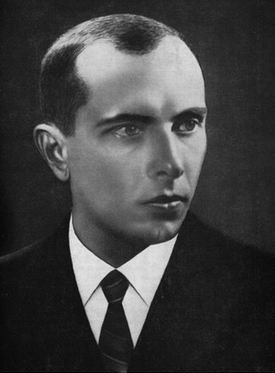 He was born in the village of , in the Kalush District in Galiсia (Stanyslaviv Oblast), which at that time was ruled by the Austro-Hungarian monarchy. His father, Andriy Bandera, was a Ukrainian priest of the Ukrainian Greek-Catholic rite in Uhryniv Staryi. His mother, Myroslava Bandera, was from an old clerical family, being the daughter of a Greek-Catholic priest in Uhryniv Staryi.

Stepan spent his childhood in Uhryniv Staryi, in the house of his parents and grandparents, growing up in an atmosphere of .

In the spring of 1922, his mother died from of the throat.

, the Home Secretary in the Polish government in 1934, but the sentence was vacated and commuted to life imprisonment.

Released by the when the Germans occupied in 1939, in 1940 he headed the revolutionary group of OUN that had broken away from pro-German 's OUN. commented in his memoirs "...we still showed a certain lack of judgment by freeing people like Bandera from prison without first checking up on them" [(Khrushchev Remembers: Little Brown and Co., Boston, 1970 at 140). ] . Bandera's group of OUN is regarded as the one which is responsible for the [ [http://books.google.com/books?id=xSpEynLxJ1MC&pg=PA165&lpg=PA165&dq=Mykola+Lebed+genocide&source=web&ots=1RjrOpuu9o&sig=s7f4nocBE2T64TyQzrMdpOvJftw&hl=en&sa=X&oi=book_result&resnum=6&ct=result#PPA166,M1 Timothy Snyder, The Reconstruction of Nations] ] .

On , he was elected a member of the Government of the established Ukrainian State proclaimed in following the German invasion of the Soviet Union. After that he was in the German where he was placed in the "". With Bandera were all the most important prisoners of the third Reich, such as ex-prime minister of , , ex-chancellor of , . Prisoners of Zellenbau received help from the unlike common concentration camp prisoners and were able to send and receive parcels from their relatives. Bandera also got help from OUN including financial assistance. Germans permitted the Ukrainian nationalists to leave the bunker for important meeting with OUN representatives in which was 200 meters from Sachsenhausen. [A.B. Shirokorad, Uteryannie zemli Rossii: otkolovshiesya respubliki, Moscow:"Veche", 2007, p. 84. ] He was released in October 1944 and headed the West European units of OUN and , the "UPA". After 1945, UPA partisan units continued fighting the and until the early 1950s, especially in the regions.

On , at the entrance of a house in Kreittmayr street, 7 ("Kreittmayrstraße"), in , Stepan Bandera was found at 13:05, bleeding and barely alive. A medical examination established that the cause of his death was poison ( gas [ [http://www.time.com/time/magazine/article/0,9171,892820,00.html The Partisan] , "", November 2, 1959] ). Two years later, on , the German judicial bodies proclaimed that the murderer of Stepan Bandera was who acted on the orders of Soviet head and Soviet premier . [ [http://www.time.com/time/magazine/article/0,9171,938806,00.html The Poison Pistol] , "", December 01, 1961] After a detailed investigation against Stashynskyi, a trial took place from to . The sentence was handed down on , in which Stashynskyi was condemned to 8 years of imprisonment. The German Supreme Court confirmed at that in the Bandera murder, the Soviet Government in Moscow was the main guilty party.

In an interview with Russian newspaper in 2005 former KGB Chief claimed that "the murder of Stepan Bandera was one of the last cases when the KGB disposed of undesired people by means of violence." [ [http://mosnews.com/interview/2005/12/06/kgbchief.shtml Mosnews.com ] ] On Stepan Bandera was buried in the in Munich.

In late 2006 the city administration announced the future transference of the tombs of Stepan Bandera, , and other key leaders of OUN/UPA to a new area of specifically dedicated to Ukrainian national liberation struggle. [ [http://www.khpg.org/en/index.php?id=1161553853 Information website of the Kharkiv Human Rights Protection Group ] ]

In October 2007, the city of erected, after many years of delays, a statue dedicated to the OUN and UPA leader Stepan Bandera. The appearance of the statue has engendered a far-reaching debate about the role of Stepan Bandera and UPA in Ukrainian History. On , , the Lviv City Council adopted a resolution establishing the "Award of Stepan Bandera." [ [http://www.korrespondent.net/main/212672/ Корреспондент » Украина » События » Львов основал журналистскую премию имени Бандеры ] ] [ [http://www8.city-adm.lviv.ua/Pool%5CInfo%5Cdoclmr_1.NSF/(SearchForWeb)/C80E4FAD6E57B422C22573760056D927?OpenDocument Розпорядження №495 ] ]