The Enormous Omelet Sandwich is a breakfast sandwich sold by the fast-food restaurant chain Burger King. It is one of their late teen to young adult male oriented products.[1] The sandwich has since been discontinued in the United States but is still sold in some of its international markets.

It was introduced on March 28, 2005, and attracted significant media attention for its ingredients and caloric content.[1] It was the first new product launched under the auspices of then CEO Greg Brenneman, and helped boost Burger King breakfast sales by 20%.[2] The Meat'normous Omelet Sandwich was introduced in May of the same year. Shortly after its introduction, comparisons were made to the fictional "Good Morning Burger" breakfast sandwich, shown in the Simpsons episode Bart's Friend Falls in Love, which was intended as an exaggerated product that could not actually come to pass in real life.

Because of its large serving size and high fat and caloric content, the sandwich garnered large amounts of negative press when first sold.[3] The negative press was compounded when Burger King began selling the companion Meat'normous sandwich.[4] 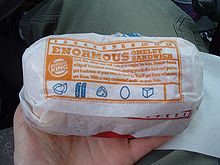 Burger King again used the viral marketing ads featuring the "Creepy King", who presented the product to unsuspecting consumers in unexpected places such as their own bedroom or in their front yards. It was promoted with the slogan "Wake up to a mouthful of breakfast with the Enormous Omelet Sandwich." The television advertisements described the sandwich like this:

Two slices of melted, American cheese, two fluffy eggs stuffed with three crispy strips of bacon, and a sizzling sausage patty, piled high on a toasted bun. The Enormous Omelet Sandwich from BURGER KING. So big, breakfast will never be the same.

The tag line for the Meat'normous was similar:

Meat on top of meat, on top of meat… Wake up to a mouthful of breakfast with the Meat’normous Omelet Sandwich. Two slices of melted American Cheese, two fluffy eggs, three crispy strips of bacon, two sizzling sausage patties and two slices of ham, piled high on a toasted bun. The Meat’normous Omelet Sandwich from Burger King. So big, breakfast will never be the same.

Burger King currently does not have any trademarks on the name Enormous Omelet Sandwich or its variants in the US and Canada.

Breakfast products from other QSR vendors: