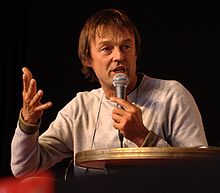 Nicolas Hulot (born April 30, 1955 in Lille, France – Officier of the Légion d'honneur, Chevalier des Arts et Lettres) is the founder and president of the Fondation Nicolas-Hulot, an environmental group first created in 1990.

He is well-known in France for his documentary show "Ushuaïa" which focuses on nature and the environment. In his documentaries, he draws attention to environmental damage caused by humans and changes that need to be made to protect the planet.

His popularity has provided him with some influence in the French political debate. In 2007 he forced five of the major candidates to the French Presidential Election (including Nicolas Sarkozy) to sign an agreement which stated that the environmental crisis would have to become a high governmental priority.

Nicolas Hulot was candidate in the Europe Écologie-The Greens primary for the French Presidential Election in 2012.[1]. He lost to Eva Joly.

In 2007, Nicolas Hulot warned candidates in the French Presidential election that he would present himself as a candidate if ecology were one of the main subjects of the elections. His high popularity – and some polls credited him with more than 15% of votes if he were to run – meant he represented a serious threat to other presidential candidates.

To avoid this event, five of the 12 candidates in the French Presidential election signed his "Pacte Ecologique" (ecology pact), affirming that ecological problems would be key in all future political decisions.[2] The importance of this pact, is however, questionable.

Some of the decisions made by the French government as a result of this pact are:

- The Ecology Minister became a "Ministre d'état," an honorific title in the French republic. - An important conference was held between environmental organizations, enterprises, researchers, economists and other experts to discuss policies to combat the current environmental crisis. It was referred to as "Le Grenelle de l'environnement," in reference to the Grenelle Agreements of 1968. - In 2009, the government tried to set up a carbon tax.

Nicolas Hulot has been criticised by some commentators, like Le Canard Enchaîné and supporters of uneconomic growth and political ecology who have criticised his use of the media and acceptance of funds from large firms, like EDF, L'Oréal and Rhône-Poulenc.[3][4]