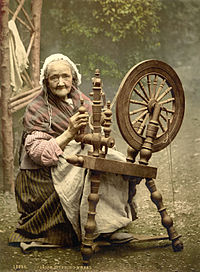 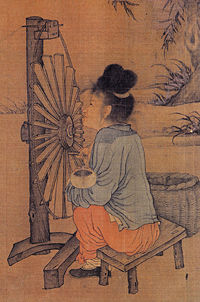 According to Mark Elvin, 14th century Chinese technical manuals describe an automatic water-powered spinning wheel. Comparable devices were not developed in Europe until the 18th century. However, it fell into disuse when fiber production shifted from hemp to cotton. It was forgotten by the 17th century. The decline of the automatic spinning wheel in China is an important part of Elvin's high level equilibrium trap theory to explain why there was no indigenous industrial revolution in China despite its high levels of wealth and scientific knowledge.

The spinning wheel replaced the earlier method of hand spinning with a spindle. The first stage in mechanizing the process was mounting the spindle horizontally so it could be rotated by a cord encircling a large, hand-driven wheel. The great wheel is an example of this type, where the fiber is held in the left hand and the wheel slowly turned with the right. Holding the fiber at a slight angle to the spindle produced the necessary twist.[3] The spun yarn was then wound onto the spindle by moving it so as to form a right angle with the spindle. This type of wheel, while known in Europe by the 14th century, was not in general use until later. It ultimately was used there to spin a variety of yarns until the beginning of the 19th century and the mechanization of spinning. 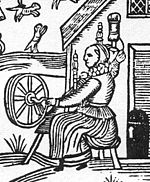 Woman spinning with a wheel, from the Elizabethan era, early 17th century

In general, the spinning technology was known for a long time before being adopted by the majority of people, thus making it hard to fix dates of the improvements. In 1533, a citizen of Brunswick is said to have added a treadle, by which the spinner could rotate her spindle with one foot and have both hands free to spin. Leonardo da Vinci drew a picture of the flyer, which twists the yarn before winding it onto the spindle. During the 16th century a treadle wheel with flyer was in common use, and gained such names as the Saxony wheel and the flax wheel. It sped up production, as one needn't stop spinning to wind up the yarn.

In the 18th century, the Industrial Revolution had a big effect on the spinning industry by beginning to mechanize the spinning wheel. Lewis Paul and John Wyatt first worked on the problem in 1738, patenting the Roller Spinning machine and the flyer-and-bobbin system, for drawing wool to a more even thickness. Using two sets of rollers that traveled at different speeds, yarn could be twisted and spun quickly and efficiently. However, they did not have much financial success. In 1771, Richard Arkwright used waterwheels to power looms for the production of cotton cloth, his invention becoming known as the water frame.

More modern spinning machines use a mechanical means to rotate the spindle, as well as an automatic method to draw out fibers, and devices to work many spindles together at speeds previously unattainable.[4] Newer technologies that offer even faster yarn production include friction spinning, an open-end system, and air jets.[5] 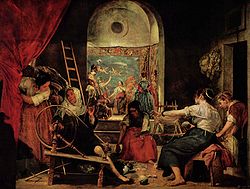 Numerous types of spinning wheels exist, including the great wheel also known as walking wheel or wool wheel for rapid long draw spinning of woolen-spun yarns; the flax wheel, which is a double-drive wheel used with a distaff for spinning linen; saxony and upright wheels, all-purpose treadle driven wheels used to spin worsted-spun yarns; and the charkha, native to Asia. Until the acceptance of rotor spinning wheel, all yarns were produced by aligning fibers through drawing techniques and then twisting the fiber together. With rotor spinning, the fibers in the roving are separated, thus open end, and then wrapped and twisted as the yarn is drawn out of the rotor cup.

Hand powered spinning wheels are powered by the spinner turning a crank for flywheel with their hand, as opposed to pressing pedals or using a mechanical engine. 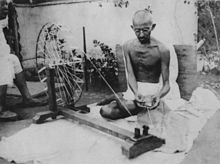 The tabletop or floor charkha is one of the oldest known forms of the spinning wheel. The charkha works similarly to the great wheel, with a drive wheel being turned by hand, while the yarn is spun off the tip of the spindle. The floor charkha and the great wheel closely resemble each other. With both, the spinning must stop in order to wind the yarn onto the spindle.[citation needed]

The charkha (etymologically related to Chakra) was both a tool and a symbol of the Indian independence movement. The charkha, a small, portable, hand-cranked wheel, is ideal for spinning cotton and other fine, short-staple fibers, though it can be used to spin other fibers as well. The size varies, from that of a hardbound novel to the size of a briefcase, to a floor charkha. Mahatma Gandhi brought the charkha into larger use with his teachings. He hoped the charkha would assist the peoples of India achieve self-sufficiency and independence, and so used the charkha as a symbol of the Indian independence movement and included it on earlier versions of the Flag of India.[citation needed]

The great wheel was one of the earlier types of spinning wheel. The fiber is held in the left hand and the wheel slowly turned with the right. This wheel is thus good for using the long-draw spinning technique, which requires only one active hand most of the time, thus freeing a hand to turn the wheel. The great wheel is usually used to spin wool, and can only be used with fiber preparations that are suited to long-draw spinning. 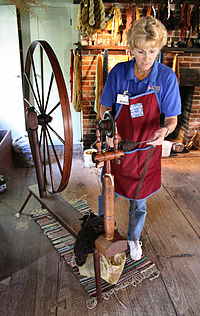 The great wheel is usually over 5 feet or 1.5 meters in height. The large drive wheel turns the much smaller spindle assembly, with the spindle revolving many times for each turn of the drive wheel. The yarn is spun at an angle off the tip of the spindle, and is then stored on the spindle. To begin spinning on a great wheel, first a leader (a length of waste yarn) is tied onto the base of the spindle and spiraled up to the tip. Then the spinner overlaps a handful of fiber with the leader, holding both gently together with the left hand, and begins to slowly turn the drive wheel clockwise with the right hand, while simultaneously walking backward and drawing the fiber in the left hand away from the spindle at an angle. The left hand must control the tension on the wool to produce an even result. Once a sufficient amount of yarn has been made, the spinner turns the wheel backward a short distance to unwind the spiral on the spindle, then turns it clockwise again, and winds the newly made yarn onto the spindle, finishing the wind-on by spiraling back out to the tip again to make another draw.

This type of wheel is powered by the spinner's foot rather than their hand or a motor. The spinner sits and pumps a foot treadle that turns the drive wheel via a crankshaft and a connecting rod. This leaves both hands free for drafting the fibers, which is necessary in the short draw spinning technique, which is often used on this type of wheel. The old-fashioned pointed distaff spindle is not a common feature of the treadle wheel. Instead, most modern wheels employ a flyer-and-bobbin system which twists the yarn and winds it onto a spool simultaneously. These wheels can be single- or double-treadle; which is a matter of preference and does not affect the operation of the wheel. 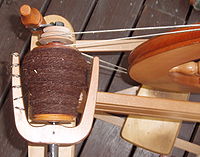 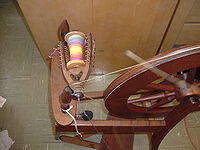 The double drive wheel is named after its drive band, which goes around the spinning wheel twice. The drive band turns the flyer, which is the horse-shoe shaped piece of wood surrounding the bobbin, as well as the bobbin. Due to a difference in the size of the whorls (the round pieces or pulleys around which the drive band runs) the bobbin whorl, which has a smaller radius than the flyer whorl, turns slightly faster. Thus both the flyer and bobbin rotate to twist the yarn, and the difference in speed continually winds the yarn onto the bobbin. Generally the speed difference or "ratio" is adjusted by the size of the whorls and the tension of the drive band.

The drive band on the double drive wheel is generally made from a non-stretch yarn or twine; candlewick is also used.

When the spindle and flyer are located above the wheel, rather than off to one side, the wheel is said to be a castle wheel. This type of wheel is often more compact, thus easier to store. Some castle wheels are even made to fold up small enough that they fit in carry-on luggage at the airport.

The spinning wheel increased the productivity of thread making by a factor of greater than 10. Medieval historian Lynn White credited the spinning wheel with increasing the supply of rags, which led to cheap paper, which was a factor in the development of printing.[6]

The ubiquity of the spinning wheel has led to its inclusion in the art, literature and other expressions of numerous cultures around the world. 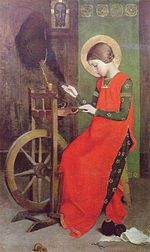 St. Elisabeth of Hungary spinning for the poor, a depiction of the castle style spinning wheel in art. Note also the distaff used to hold the fiber.

The Golden Spinning Wheel (Zlatý kolovrat)[7][8] is a Czech poem by Karel Jaromír Erben that was included in his classic collection of folk ballads, Kytice.

Rumpelstiltskin, one of the tales collected by the Brothers Grimm, revolves around a woman who is imprisoned under threat of execution unless she can spin straw into gold. Rumpelstiltskin helps her with this task, ultimately at the cost of her first-born child; however, she makes a new bargain with him and is able to keep her child after successfully guessing his name.

Spinning wheels are also integral to the plot or characterization in the Scottish folk tale Habitrot[9] and the German tales The Three Spinners.[10] and The Twelve Huntsmen[11]

Louisa May Alcott, most famous as the author of Little Women, wrote a collection of short stories called Spinning-Wheel Stories,[12] which were not about spinning wheels but instead meant to be read while engaging in the rather tedious act of using a spinning wheel.

Antonín Dvořák used Erben's The Golden Spinning Wheel as the basis for one of his symphonic poems.[13]

The Spinning Wheel is also the title/subject of a classic Irish folk song by John Francis Waller.[15][16]

Spinning wheels also feature prominently in the Wagner opera The Flying Dutchman; the second act begins with local girls sitting at their wheels and singing about the act of spinning.

Spinning wheels may be found as motifs in art around the world, ranging from their status as domestic/utilitarian items to their more symbolic role (such as in India, where they may have political implications).