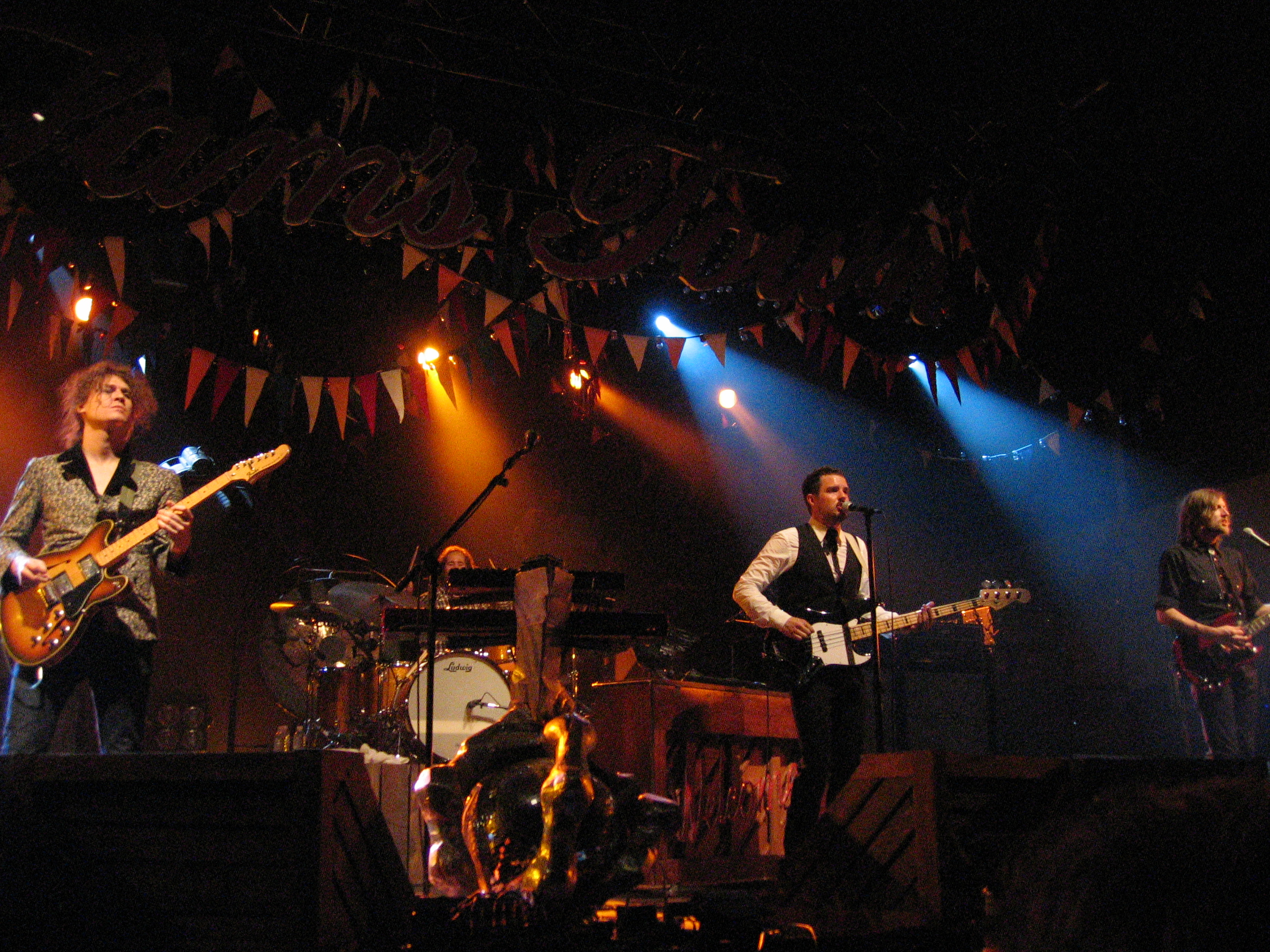 The Killers are an American rock band from . Formed in 2002, the group consists of Brandon Flowers (vocals, keyboards), (, vocals), (, vocals) and , (percussion, drums) with often providing support during live performances.

Part of the movement, The Killers draw influence from music styles of the 1980s and 1990s. The group's debut album, "" (2004) brought the band mainstream success. The Killers' second album, "", was released in 2006, and the "Sawdust" containing B-sides, rarities, and new material, was released in 2007. The band's first two albums have sold in excess of 12 million copies worldwide combined. The group is currently working on their third album, entitled "", which is being produced by .

In 2001, Brandon Flowers was abandoned by his first band,fact|date=October 2008 a band known as , after he declined to move with the rest of them to .fact|date=October 2008 He then met David Keuning after responding to an ad that Keuning had placed in "The Sun" newspaper. Ronnie Vannucci Jr. and Mark Stoermer were approached by Flowers and Keuning with an offer to join "The Killers", a name which comes from the bass drum of a fictional band in the for the song "Crystal".

Initially, The Killers played at large clubs in Las Vegas, Nevada. With the band's lineup stable and its repertoire of songs expanding, the band attracted the attention of a British representative for Warner Bros. Though the Warner Bros representative passed on the band, he took the demo back with him, showing it to a friend who worked at UK indie label Lizard King. The Killers signed that summer to the British label. [cite web|accessdate=2008-04-26|url=http://nl.newsbank.com/nl-search/we/Archives?p_product=KC&p_theme=kc&p_action=search&p_maxdocs=200&p_topdoc=1&p_text_direct-0=105C0D1604FBCFD8&p_field_direct-0=document_id&p_perpage=10&p_sort=YMD_date:D&s_trackval=GooglePM|title=And you can dance to it |publisher=""|date=2004-09-14|author=Sculley, Alan ]

The Killers released their album "" in June 2004 in the United Kingdom on -based indie record label , and in United States on . "Hot Fuss" has been classified 4x Platinum by the BPI [cite web|accessdate=2008-05-02|url=http://www.signonsandiego.com/news/features/20070405-9999-lz1w05killers.html|title=Can Killers regain form at UCSD? Stay tuned |publisher=""|date=2007-04-05|author=Nixon, Chris ] and 3x Platinum by RIAA. [cite web|accessdate=2008-05-02|url=http://www.rollingstone.com/rockdaily/index.php/2007/10/08/hot-issue-hits-and-misses-the-killers-and-the-cooper-temple-clause/|title=Hot Issue Hits and Misses: The Killers and the Cooper Temple Clause |publisher=""|date=2006-10-08 ] The band also had chart success with its singles "", which reached the Top 10 in the UK when released, [cite news|title=Rock & Pop: Shooting from the hip|publisher=""|date=2004-06-25|author=Loundras, Alexia] and "". [cite news|title= Top rockers add Granite City to UK tour schedule |publisher="Evening Express"|date=2006-10-31|author=Begbie, Scott] However, their main mainstream success came when they scored a number three chart position with their re-release of "".

The members of the band appeared as themselves in a 2004 episode of the teen television drama "". [cite web|accessdate=2008-04-26|url=http://en.wikipedia.org/w/index.php?title=Ringtone|title='O.C.' Finale to Be a Family Affair |publisher=|date=2005-05-19 ] In July 2005, The Killers performed on the London stage of the concert. They performed "All These Things That I've Done". To their surprise, incorporated the song's refrain "I've got soul but I'm not a soldier" into his own performance. and followed suit, and at their separate concerts played in Las Vegas, with The Killers in the crowd, they incorporated that famous line into the songs "" and "", respectively. [cite web|accessdate=2008-04-26|url=http://www.men-arena.com/about/?page_id=1210|title=Event Listings|publisher=]

The Killers recorded a live session at for "" on November 29, 2006. [cite news|title=EMI cues up feast of fresh albums |publisher=""|date=2005-10-01] They performed an almost totally unplugged set, which included a rendition of the hit "Romeo and Juliet". In February 2007, The Killers attended the in the United Kingdom, where they performed "". The band won two awards - International Group & International Album. [cite web|accessdate=2008-04-26|url=http://www.independent.co.uk/news/media/arctic-monkeys-scoop-two-brits-but-shun-mainstream-show-436419.html|title=Arctic Monkeys scoop two Brits but shun 'mainstream' show |publisher=""|date=2007-02-15|author=Akbar, Arifa ]

The band released a compilation album called "Sawdust", containing B-sides, rarities, and some new material, in November 2007. "Sawdust" has been classified Gold by the BPI.

The Killers have been finishing work on a third album, which is scheduled to be released on November 24, 2008 in the UK and on November 25 elsewhere. Brandon Flowers confirmed the album's title as "" in an interview with "". [cite web|accessdate=2008-08-05|url=http://www.rollingstone.com/rockdaily/index.php/2008/08/05/news-ticker-the-killers-jonas-brothers-american-idol/|title=News Ticker: The Killers, Jonas Brothers, “American Idol”|publisher=""|date=2008-08-05 ] They have been working with Stuart Price who did the 'Thin White Duke' remix of 'Mr Brightside' and produced 'Leave the Bourbon on the Shelf' and 'Sweet Talk'. The first single from the album was nowrap|"Human", released on September 22. The band are reportedly releasing a third Christmas single in 2008, entitled "Joseph, Better You Than Me". The single, due to be released in December, is a duet with and is not featured on "Day & Age". [cite web|accessdate=2008-09-23|url=http://www.digitalspy.co.uk/music/a130905/killers-elton-to-release-christmas-single.html|title=Killers, Elton to release Christmas single|publisher=""|date=2008-09-23 ] The Killers appeared on Saturday Night Live on October 4th, 2008 where they performed two new songs, "Human" and "Spaceman".

Since going platinum, the band (and principally Flowers) has incited a few rivalries—most notably with and , who are both labelmates (Island Records). Flowers has said that these bands, especially The Bravery, are riding on the coattails of the success of The Killers.

In February 2006, The Killers' former manager, Braden Merrick, filed a lawsuit alleging breach of contract when he was fired in May 2005. Merrick's contract was to have run through 2007, and the two sides had been negotiating a settlement before the lawsuit was filed.