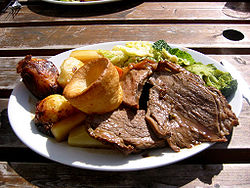 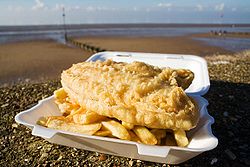 Fish and chips, a popular take-away food of the United Kingdom. 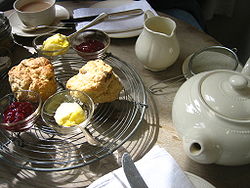 The custom of afternoon tea and scones has its origins in Imperial Britain.

British cuisine is the specific set of cooking traditions and practices associated with the United Kingdom. British cuisine has been described as "unfussy dishes made with quality local ingredients, matched with simple sauces to accentuate flavour, rather than disguise it."[1] However, British cuisine has absorbed the cultural influence of those that have settled in Britain, producing hybrid dishes, such as the Anglo-Indian chicken tikka masala."[2][3]

Celtic agriculture and animal breeding produced a wide variety of foodstuffs for indigenous Celts and Britons. Anglo-Saxon England developed meat and savoury herb stewing techniques before the practice became common in Europe. The Norman conquest introduced exotic spices into England in the Middle Ages.[4] The British Empire facilitated a knowledge of India's elaborate food tradition of "strong, penetrating spices and herbs".[4] Food rationing policies, put in place by the British government during wartime periods of the 20th century,[5] are said to have been the stimulus for British cuisine's poor international reputation.[4] Contrary to popular belief, the modern British now consume more garlic per capita than the French.[6]

British cuisine has traditionally been limited in its international recognition to the full breakfast and the Christmas dinner.[4] Other famous British dishes include fish and chips, the Sunday roast, steak and kidney pie, and bangers and mash. British cuisine has many regional varieties within the broader categories of English, Scottish and Welsh cuisine. Each have developed their own regional or local dishes, many of which are geographically indicated foods such as Cornish pasties, the Yorkshire pudding, Arbroath Smokie, and Welsh cakes.

Romano-British agriculture, highly fertile soils and advanced animal breeding produced a wide variety of very high quality foodstuffs for indigenous Romano-British people. Anglo-Saxon England developed meat and savoury herb stewing techniques and the Norman conquest reintroduced exotic spices and continental influences back into Great Britain in the Middle Ages[4] as maritime Britain became a major player in the transcontinental spice trade for many centuries after. Following the Protestant Reformation in the 16th and 17th centuries "plain and robust" food remained the mainstay of the British diet, reflecting tastes which are still shared with neighbouring north European countries and traditional North American Cuisine. In the 18th and 19th centuries, as the Colonial British Empire began to be influenced by India's elaborate food tradition of "strong, penetrating spices and herbs", the United Kingdom developed a worldwide reputation[7] for the quality of British beef and pedigree bulls were exported to form the bloodline of major modern beef herds in the New World.[4] Developments in plant breeding produced a multiplicity of fruit and vegetable varieties, with British disease resistant rootstocks still used around the world for fruits such as apples.

During the World Wars of the 20th century difficulties of food supply were countered by official measures which included rationing. The problem was worse in the second World War and the Ministry of Food was established to address the problems. (See Rationing in the United Kingdom for more details.) Due to the economic problems following the war, rationing continued for some years afterwards and in some aspects was actually more strict than it was during wartime. Rationing was not fully lifted until almost a decade after war ended in Europe, so that a whole generation was raised without access to many previously common ingredients. These policies, put in place by the British government during wartime periods of the 20th century,[5] are often claimed as the stimulus for the decline of British cuisine in the 20th century.

In common with many advanced economies, rapid urbanisation and the early industrialisation of food production as well as female emancipation have resulted in a highly modern consumer society with reduced connection to the rural environment and adherence to traditional household roles. Consequently food security has increasingly become a major popular concern.[8] Concerns over the quality and nutritional value of industrialised food production led to the creation of the Soil Association in 1946. Its principles of organic farming are now widely promoted and accepted as an essential element of contemporary food culture by many sections of the UK population, and animal welfare in farming is amongst the most advanced in the world. The last half of the 20th century saw an increase in the availability of a greater range of good quality fresh products and greater willingness by many sections of the British population to vary their diets and select dishes from other cultures such as those of Italy and India. 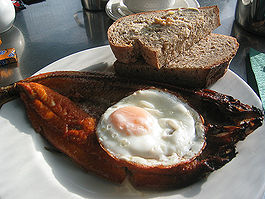 Kippers for breakfast in England.

Modern British (or New British) cuisine is a style of British cooking which fully emerged in the late 1970s, and has become increasingly popular. It uses high-quality local ingredients, preparing them in ways which combine traditional British recipes with modern innovations, and has an affinity with the Slow Food movement.

It is not generally a nostalgic movement, although there are some efforts to re-introduce pre-20th-century recipes. Ingredients not native to the islands, particularly herbs and spices, are frequently added to traditional dishes (echoing the highly spiced nature of much British food in the mediaeval era).

The Modern British style of cooking emerged as a response to the depressing food rationing that persisted for several years after the Second World War, along with restrictions on foreign currency exchange, making travel difficult. A hunger for exotic cooking was satisfied by writers such as Elizabeth David, who from 1950 produced evocative books whose recipes (mostly French and Mediterranean) were then often impossible to produce in Britain, where even olive oil could only normally be found in chemists rather than food stores. By the 1960s foreign holidays, and foreign-style restaurants in Britain, further widened the popularity of foreign cuisine. Recent Modern British cuisine has been very much influenced and popularised by TV chefs, all also writing books, such as Fanny Cradock, Robert Carrier, Robert Irvine, Delia Smith, Gordon Ramsay, Nigella Lawson and Jamie Oliver, alongside the Food Programme, made by BBC Radio 4.

Kedgeree, an example of an Anglo-Indian dish

Some Anglo-Indian dishes derive from traditional British cuisine, such as roast beef, modified by the addition of Indian-style spices, such as cloves and red chillies. Fish and meat are often cooked in curry form with Indian vegetables. Anglo-Indian food often involves use of coconut, yogurt, and almonds. Roasts and curries, rice dishes, and breads all have a distinctive flavour.

English cuisine is shaped by the climate of England, its island geography and its history. The latter includes interactions with other European countries, and the importing of ingredients and ideas from places such as North America, China and southern Asia during the time of the British Empire

The cuisine of Northern Ireland is largely similar to that of the rest of the island of Ireland. In this region, the Ulster Fry is particularly popular and the Old Bushmills Distillery, one of the world's oldest whiskey producers,[9] is based in Bushmills, County Antrim. 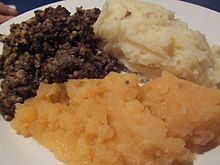 Scottish cuisine is the specific set of cooking traditions and practices associated with Scotland. It shares much with English cuisine, but has distinctive attributes and recipes of its own. Traditional Scottish dishes such as haggis and shortbread exist alongside international foodstuffs brought about by migration. Scotland is known for the high quality of its beef, lamb, potatoes, oats, and sea foods. In addition to foodstuffs, Scotland produces a variety of whiskies.

Welsh cuisine has influenced, and been influenced by, other British cuisine. Although both beef and dairy cattle are raised widely, especially in Carmarthenshire and Pembrokeshire, Wales is best known for its sheep, and thus lamb is the meat traditionally associated with Welsh cooking.

Dates of introduction of various foodstuffs and methods to Britain 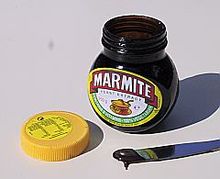 A jar of British Marmite