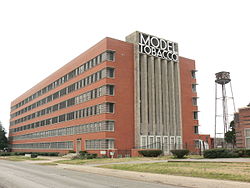 Built from 1938-40, the Art Deco style Model Tobacco Building is the primary six-story building of a six building collection of buildings comprising a former tobacco factory. Located at 1100 Jefferson Davis Highway (U.S. Route 1), in Richmond, Virginia, the building was designed by the Chicago architecture firm of Schmidt, Garden and Erikson and is known for the 9' tall Moderne MODEL TOBACCO letters which dominate the north end of the building.

It is one of many Art Deco buildings in Richmond, including assorted buildings on Grace Street including the Central National Bank building, the Virginia Union Belgian Building, Medical College of Virginia's West Hospital and Henrico Theater.

Currently the building houses approximately 3.5 acres (14,000 m2) of used cubicle partitions and other miscellaneous office furniture. It also is the site of Russ Parsons' famous collection of "hot dog cars," rumored in certain circles to be worth tens of thousands of dollars.

A developer, Hunt Investments LLC, has proposed turning the property into over 600 apartments, with a projected cost of $84 million.[1] The development will offer an indoor pool, a fitness center, jogging trail, a childcare center, and individual security for each of the housing units. Over 600 apartments will be developed in a mix of both market rate and workforce housing in three phases. Less than five minutes from the central downtown business district via a divided 4 lane highway, this historic Model Tobacco destination will become the flagship for renewal of the Jeff Davis Corridor.