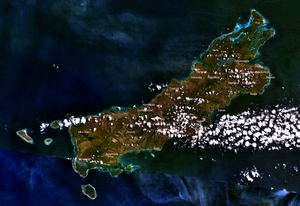 Map of the islands of East Nusa Tenggara, including Rote (labelled as Roti).

Rote Island (Indonesian: Pulau Rote, also spelled Roti) is an island of Indonesia, part of the East Nusa Tenggara province of the Lesser Sunda Islands. It has an area of 1,200 km2 (463 sq mi). It lies 500 km (311 mi) northeast of the Australian coast and 170 km (106 mi) northeast of the Ashmore and Cartier Islands. The island is situated to the southwest of the larger island of Timor. To the north is the Savu Sea, and to the south is the Timor Sea. To the west is Savu and Sumba. The uninhabited Dana Island (also called Ndana), just south of Rote, with an area of 14 km2 (5 sq mi), is the southernmost island of Indonesia. Along with some other nearby small islands, such as Ndao, it forms the kabupaten (regency) of Rote Ndao Regency, which in 2010 decennial census recorded a population of 119,711.[1]

The main town, called Baa, is located in the north of the island. It has a good surf area in the south around the village of Nembralla. There is a daily ferry to the island from Kupang, the provincial capital on West Timor, which brings tourists.

Rote has many historical relics including fine antique Chinese porcelain, as well as ancient arts and traditions. Many prominent Indonesia nationalist leaders were born here. A popular music instrument Sasando, which is made of palm leaves. According to legend, this island got its name accidentally when a lost Portuguese sailor arrived and asked a farmer where he was. The surprised farmer, who could not speak Portuguese, introduced himself, "Rote".

Rote, just off the southern tip of Timor Island, consists of rolling hills, terraced plantations, acacia palm, savanna and some forests. The Rotinese depend, like the Savunese, on lontar palm for basic survival, but also as a supplement to their income from fishing and jewelry making.

Agriculture is the main form of employment. Fishing is also important, especially in the eastern village of Papela, which has led to disputes with Australia over the water between them.[2]