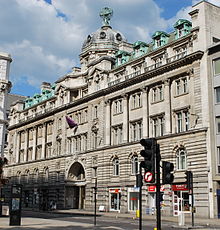 In 1848 Charles Blomfield, Bishop of London, called upon the clergy to establish evening classes to improve the moral, intellectual and spiritual condition of young men in London. In response, the Reverend Charles Mackenzie, who instituted the Metropolitan Evening Classes for Young Men in Crosby Hall, Bishopsgate, London, with student fees at one shilling per session. Subjects on the original curriculum included Greek, Latin, Hebrew, English, History, Mathematics, Drawing and Natural Philosophy. This fledgling college came under royal patronage following the visit of Prince Albert to the classes in 1851. In 1860 the classes moved to Sussex Hall, the former Livery Hall of the Bricklayers' Company, in Leadenhall Street. By this time, some 800 students were enrolled annually.

In 1861 the classes were reconstituted as the City of London College. Over the next twenty years, the College was one of the pioneers in the introduction of commercial and technical subjects. The College built new premises in White Street at a cost of £16,000 (contributions were received from Queen Victoria and the Prince of Wales) and were opened in 1881. In 1891 the College joined the Birkbeck Institute (now Birkbeck College, University of London) and the Northampton Institute (now City University, London) to form the notional City Polytechnic by a Charity Commissioners' scheme to facilitate funding for these institutions by the City Parochial Foundation, and to enable the three institutions to work cooperatively. However this attempted federation did not function in practice, as each institution continued to operate more or less independently. The City Polytechnic concept was dissolved in 1906, and the City of London College came under the supervision of London County Council.

In December 1940 the College's building was destroyed by a German air raid. The College subsequently moved into premises at 84 Moorgate (now London Metropolitan Business School) in 1944. The College celebrated its centenary in 1948 with a service of thanksgiving addressed by the Archbishop of Canterbury at St Paul's Cathedral. In 1970 the College merged with the Sir John Cass College of Arts and Science to form the City of London Polytechnic. The London College of Furniture was incorporated into the Polytechnic in 1990. Under the Further and Higher Education Act 1992 the Polytechnic was awarded University status, previously having awarded the degrees of the former Council for National Academic Awards. London Guildhall University was named in order to show its links with the City of London and the City's many guilds/livery companies. It was unassociated with the Guildhall School of Music and Drama, based at the Barbican Centre.