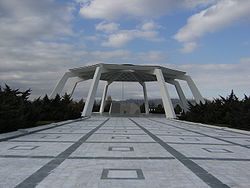 Turkish State Cemetery (Turkish: Devlet Mezarlığı) is a national and military cemetery in Ankara, Turkey, containing the graves of the presidents of Turkey and the high-ranked, close companions-in-arms of Mustafa Kemal Atatürk, the founder of the Republic of Turkey, in the Turkish War of Independence.

The cemetery was established upon an act dated November 10, 1981. It is situated around the "Karadeniz Havuzu" (Black Sea Pool) on the grounds of the historical "Atatürk Orman Çiftliği" (Atatürk Forest Ranch) in Ankara. The architect Özgür Ecevit and the agronomist Ekrem Gürenli, who won the contest organized by the Ministry of National Defense in 1982, designed the state cemetery.

It was opened on August 30, 1988 with a state funeral ceremony for the transferred bodies of two presidents, Cemal Gürsel and Cevdet Sunay, and of 61 commanders of the War of Independence. At the opening ceremony were present, President Kenan Evren, Prime Minister Turgut Özal, and leaders of the political parties represented in the parliament, Erdal İnönü (SHP) and Süleyman Demirel (DYP), and members of the President's Council.[1]

The cemetery is administrated by the Ministry of National Defense.

It is memorial park with an area of 536,000 m² open to the public, of which 180,000 m² is planned and the remaining is green area. The Black Sea Pool, built in 1931 by the order of Atatürk, was restored during the establishment of the state cemetery. The surrounding area of the pool serves today as a recreational park.

A road within the cemetery flanked by marble sculptures, called "Cumhuriyet Tarihi Yolu" (History of the Republic Road), is dedicated to the milestones in the era of the rebirth of the nation. This collection of artworks features the first-ever large-scale sculpture arrangement in Turkey. The road starts with a statue symbolizing the beginning of the War of Independence by landing Atatürk’s in Samsun on May 19, 1919. Sculptures remembering the congresses in Erzurum and Sivas, establishment of the new parliament in Ankara follow. In the section of wars, 5 columns stand in the water with inscriptions from the "Büyük Söylev" (Grand Speech) of Atatürk. A sculpture erected for the Peace Treaty of Lausanne accomplishes this section. Reliefs on both sides of the road in this section describe the foundation of the regular armed forces, First and Second İnönü Battles, Battle of the Sakarya and the Battle of Dumlupınar. The last artwork is a single abstract sculpture symbolizing the abolition of the office of caliphate by the republic. A team of Turkish sculptors led by the renowned artist Rahmi Aksungur created the artworks.

A funeral ceremony place borders the graveyard, which is decorated by two sculpture groups on both sides showing scenes from the War of Independence. An octagon structure in the form of a Turkic yurt, called "Simge" (Symbol), is found at the end of the ceremony place, which serves as a shelter against bright light, heat or precipitation. A wall under the "Simge" memorizes the burials with their names carved on it, and looks like an unfinished one. For every new president of Turkey, a stone is added to this "Anısal Duvar" (Memorial Wall) to express the continuity of the republic. A flagpole of 25 meters tall is erected in the graveyard of presidents, symbolizing the development of the republic.

The state cemetery is served by the city bus line 365 from Kızılay, or public bus line 339 from Sıhhiye Bridge.

Inside the cemetery, a museum exhibits personal belongings, photos and printed media of the burials. It is open weekdays except Monday and Tuesday.

The personalities, who are entitled to be buried in the state cemetery are, according to law, state presidents and commanders of the War of Independence only. In November 2006, an act of parliament extended the list of persons to prime ministers and speakers of the parliament to enable the burial of former Prime Minister Bülent Ecevit in the state cemetery, who died on November 5, 2006.

1 Mareşal (Field marshal), 11 Birinci Feriks, 14 Feriks, 20 Mirlivas, 14 Miralay (Colonel)s and 1 Kaymakam (Lieutenant Colonel), who were selected from companion-in-arms of Mustafa Kemal Atatürk in the Turkish War of Independence, in total 61 commanders rest here. But tombs of 11 commanders are empty and only symbolic monument.[2]