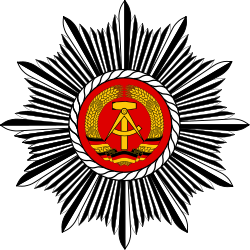 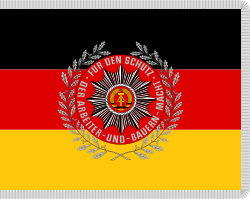 The Volkspolizei (German for the "people's police"), or VP, were the national police of the German Democratic Republic (East Germany). The Volkspolizei were responsible for most law enforcement in East Germany, but its organisation and structure were such that it could be considered a paramilitary force as well. Unlike typical police in most countries, they were equipped with armoured personnel carriers and artillery and trained as military units.

While any East German citizen could be a non-commissioned officer, all members of the commissioned officer corps were required to be members of the Socialist Unity Party of Germany (SED), as the force was expected to maintain the interests of the party and its regime as well as public order. The VP was founded after World War II, taking the East German remnant of the Nazi Ordnungspolizei (Orpo) and Kriminalpolizei (Kripo), and was abolished after German reunification. East Germans nicknamed the Volkspolizei the VoPo.

The Volkspolizei executed traditional police duties such as investigation and traffic control. The VP transferred most of their reports to the Ministry of State Security (MfS) and the high density of MfS informants in the GDR,[clarification needed] especially in the forces, meant that every police action and investigation could be monitored as besides the official MfS liaison-officer (VO-Verbindungsoffizier), the MfS had agents in nearly every police unit.

The Volkspolizei was a national police force and was directly administered by and subordinate only to the Ministry of the Interior.

Rather than the civil service status that West German police enjoyed, each Volkspolizist had a personal contract with the government. The monthly salary was above the average income.

Main administration of the Volkspolizei

The Volkspolizei was administered by the Ministry of the Interior. The overall commander was the First Deputy Minister of the Interior and Chief of Police (Erster Stellvertreter des Ministers und Chef der Deutschen Volkspolizei). His section was subdivided into five departments:

The military part of the Volkspolizei, that is the Kasernierte Einheiten, was administered by the Deputy Minister of the Interior and Chief of the Administrative Center (Stellvertreter des Minister und Chef der Hauptinspektion).

Recruitment to the Volkspolizei required at least ten years of education, vocational training (see education in East Germany), military service, and a history of political loyalty.

The reasons Volkspolizei officers gave for joining the force were a desire to work with people, idealism, family tradition, belief in the system and the wish to serve one's country.

Members of the East German Volkspolizei parading through the streets of Neustrelitz in 1955. They are armed with WWII German StG 44 rifles.

From 1962, the DVP had its own school in Berlin-Biesdorf which trained around 3,500 officers up to 1989. There were several other schools. The Kasernierten Einheiten (barracks units) had their own training facilities. Officers were initially trained in the army ground forces, from 1963 at the Officers' school and from 1971 to the officers' school in Dresden-Wilder Mann.

The Volkspolizei had approximately 80,000 full-time police officers and 177,500 volunteers.

With the accession of the GDR to the Federal Republic on 3 October 1990, authority over the police went to the newly created federal jurisdiction. About 40 percent of the DVP employees had to leave the service.

The National People's Army and the Volkspolizei erected the Berlin Wall in 1961. The leadership declared it would protect the country against what they represented as the negative elements of West German and NATO societies, particularly fascist sympathisers (the wall was officially called the "anti-fascist protection rampart") and help on the way to a crime-free workers' state. The leaders' wish came partially true; compared to West Germany, East Germany's crimes rates were very low,[citation needed] although this could be due to the lack of personal ownership.

This crime rate increased when the Berlin Wall fell in 1989, a common feature of transitions from one-party states.[citation needed] The Volkspolizei were unfamiliar with crime prevention and apprehension, due to the low crime rates of East Germany. They were unprepared to stop the everyday crimes of West Germany after 1989. Leipzig, for example, was faced a 540 percent increase of theft from 1989 to 1990.[citation needed]

Main article: History of the Volkspolizei

The Volkspolizei was effectively founded just following World War II, when the Soviet Union established central police forces in the regions of Germany it occupied (in violation of the agreements at the Yalta Conference and the Potsdam Conference). The SVAG approved the arming of community-level police forces on 31 October 1945.

The official oath that all Volkspolizei officers swore was:[1]

With the exception of the Kasernierte Volkspolizei, whose stone-grey uniforms follow the style of the East German National People’s Army (Nationale Volksarmee - NVA), all Volkspolizei services wore the same basic uniform adopted in 1956 when it was officially established. There were various kinds of uniforms, worn according to the work or social situation and differing in material for summer or winter wear. Most uniforms — service, semi-dress, and parade — are gray-green but the transport police wore dark blue. The better quality and texture of the cloth in officers' uniforms distinguished them from the uniforms of enlisted personnel. The field and service uniforms became normal attire in garrison and for most other duty activities.

The basic categories of uniforms were field, service, semi-dress, and parade.

Field uniforms (Felddienstuniform) were for only the Kasernierte Volkspolizei. The field uniform consisted of the NVA's service uniform. The uniform was worn with a field cap, service cap, or steel helmet; high black boots; and a leather belt with vertical web shoulder suspenders. In the winter, a quilted stone-grey padded suit without a camouflage pattern is worn over the service uniform. The winter uniform also includes a fur pile cap or a steel helmet, boots, knitted grey gloves, belt, and suspenders.

The semi-dress uniform (Ausgangsuniform), except in details, was the same for all ranks and was worn on off-duty or off-post occasions. It included the service cap, jacket, long trousers, and black low-quarter shoes. The single-breasted jacket was worn without a belt, with a white or grey-green shirt and a green tie. Officers were allowed to wear the jacket with a white shirt. During periods of warm summer weather, either the shirt and tie or the jacket may be omitted. For a while a double-breasted jacket could be worn as optional wear by officers and warrant officers.

The parade uniform (Paradeuniform) for officers was the semi-dress jacket worn with all awards and decorations, breeches and riding boots, steel helmet or police shako (Tschako) from 1950 to the late 1960s, white shirt, green neck-tie, and a ceremonial dagger on the left side, fastened to a silver-grey parade belt. Officers in guards of honour carry sabres. In winter, overcoat, scarf, and gloves were worn.

Other types of Volkspolizei uniforms existed. High-ranking officers occasionally wore white uniforms, or at least a white jacket, and staff officers were supplied with staff service uniforms. Women had their own uniforms consisting of jackets, skirts or slacks, blouses, caps, boots or pumps, and other appropriate items in accordance with the season and the occasion. Traffic police, motorcyclists, armoured vehicle personnel, and others have special items of apparel.

Volkspolizei uniform initially had green waffenfarben, but later reverted to white except for the transport police who wore blue. The uniform of the Kasernierte Volkspolizei is distinguished from that of the NVA ground force and Air Defence Force by a green armband with large silver letters identifying the wearer's affiliation.