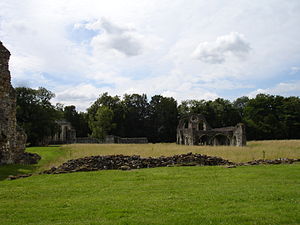 The ruins of Waverley Abbey. 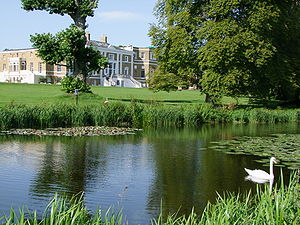 Waverley Manor by the River Wey.

Waverley Abbey was the first Cistercian abbey in England, founded in 1128 by William Giffard, Bishop of Winchester. It is situated about one mile south of Farnham, Surrey, in a bend of the River Wey.

During the first century of its existence, it founded six monasteries, and despite the members thus sent away, it had 70 monks and 120 lay brothers in 1187. It kept about thirty ploughs.

The site was subject to regular flooding, however, and in 1203 the foundations for a new church and monastery were laid on higher ground. The new church was dedicated in 1231.

King John visited Waverley in 1209, and Henry III in 1225. The abbey also produced the famous annals of Waverley, an important source for the period.

By the end of the thirteenth century the abbey was becoming less important. By the time it was suppressed by Henry VIII in 1536 as part of the dissolution of the monasteries there were only thirteen monks in the community and the abbey had an annual net income of £174.

Stones from the abbey when it lay in ruins were taken to build nearby houses, including the house at Loseley Park.

The ruins of Waverley Abbey are managed today by English Heritage. The sign at the entrance to the ruins states that it was the inspiration for Sir Walter Scott's novel Waverley.[1] However, this is probably not the case. Sir Walter Scott chose to adopt the name for his fictional hero Edward Waverley, the heir to an estate in southern England who travels north and becomes embroiled in the Jacobite uprising of 1745.[2] Waverley Abbey was, however, featured in Arthur Conan Doyle's classical romance, Sir Nigel. It was the scene of his winning of his war horse, Pommers, and his youthful embarrassment of the avaricious abbey authorities. 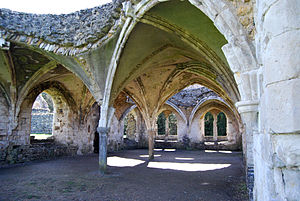 Remains of the undercroft of the lay brothers' refectory 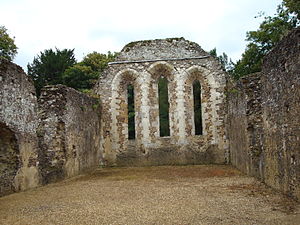 A noteworthy piece of the ruins is the undercroft of the lay brothers' refectory. A section of 13th century vaulting still exists, supported by slender columns with circular capitals. The south gabled end stands almost to full height, displaying two pairs of lancet windows at the lowest level, with a single traceried window above each pair, and a central round window between those.[3] The walls are faced in rough flintwork.

Waverley was purchased by Florence Nightingale's family, and she visited the mansion frequently. It became a Red Cross hospital during the First World War, and after World War II it was converted into apartments for retired people.

At least two BBC TV programmes have claimed that the site of Waverley Abbey formed part of the defences of London set up in World War II. The defence was called the "GHQ Line". These claims are at least partly supported by the brick gun emplacement forming one side of the car park, and the multitude of tank traps[4] along the bank of the River Wey at the back of the abbey. It was said that the large open space, formed by the curve of the river on one side and the lake on the other, was intended to be a "tank killing ground" for any German army intending to outflank London's defences.

The abbey ruins have been used as a location in the filming of a number of films and television dramas, most notably as the setting for an idyllic interlude in Danny Boyle's 2002 film 28 Days Later.

The following productions include scenes filmed in Waverley Abbey:

The following is a list of the abbots of Waverley Abbey.[9]