Vada
This article is about an Indian food item. For a city in Maharashtra, India, see Vada, Thane. For the Romanian village of Vădaş, see Neaua. 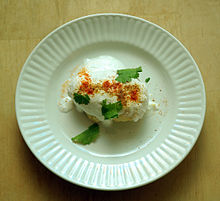 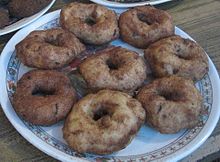 A plateful of Uzhundhu vada

Vada can vary in shape and size, but are usually either doughnut- or disc-shaped and are about between 5 and 8 cm across. They are made from dal, lentil, gram flour or potato.

Vada is a traditional South Indian food known from antiquity.[2] Although they are commonly prepared at home, vadas are as well a typical street food in the Indian Subcontinent and Sri Lanka. They are usually a morning food, but in street stalls and in railway stations, as well as inside the Indian Railways, they are available as a snack all through the day.

Origin of the vada is unknown as of now.

The general way of preparing vada is to make a paste or dough with gram flour or mashed or diced potatoes and/or dal lentils. This mixture is subsequently seasoned by mixing with black mustard seeds, onion, curry leaves, which are sometimes previously sauteed, and salt, chilies and/or black pepper grains. Often ginger and baking soda are added to the seasoning.[3] The individual vadas are then shaped and deep-fried. Certain types of vada are covered in a gram flour batter before frying.

Although battered and deep-fried, the finished product should not be too oily if prepared correctly, since steam build-up within the vada pushes all oil away from within the vada.

Vada is typically and traditionally served along with a main course such as Dosa, Idli, or Pongal. Nowadays it is also ordered as an À la carte item but is never the main course and is had as a light snack or on the side of another dish and usually not separately as a meal. Vadas are preferably eaten freshly fried, while still hot and crunchy and is served with a variety of dips ranging from Sambar to chutney to curd.

The main vada types are:

Other types of vada are: 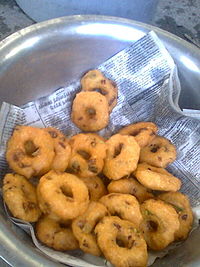