State Route 37 (SR 37) is a state highway in the northern part of the U.S. state of California that runs 21 miles (34 km) along the northern shore of San Pablo Bay. It is built from U.S. Route 101 in Novato and runs through the southern tips of Sonoma and Napa Counties to Interstate 80 in Vallejo. It serves as a vital connection between the four counties of the North Bay Area, north of San Francisco.

SR 37 has been proposed to be built to freeway standards since the early 1950s. However, the proposal was met with many economic and environmental obstacles, making the task all but impossible for much of the route. Notable problems included a levee break in Vallejo which turned part of the land around the highway into a marsh that is home to endangered species, and a section of highway known as "Blood Alley" for its high-rate of fatal accidents. 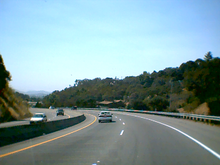 Intended to run from the unconstructed State Route 251, SR 37 begins in Novato with a junction at U.S. Route 101 and heads northeast as a freeway for about a quarter mile before becoming a four-lane expressway. The route passes over the Petaluma River into Sonoma County before meeting the southern terminus of State Route 121 near Sears Point (where the Infineon Raceway is located) at a signal-controlled intersection.

The route continues in a more easterly, then southeasterly, direction as a two-lane highway with a concrete divider (essentially a super two-lane highway) crossing Tolay Creek and proceeding through the Napa Sonoma Marsh at the northern edge of San Pablo Bay. Before the construction of the barrier in 1995, this portion of SR 37 was three lanes with the middle lane alternately serving as a passing lane for each direction. This stretch of highway was given the nickname of "Blood Alley" for its high-rate of fatal accidents.[3] With the middle lane removed, accidents dropped dramatically, but it is not uncommon for long chains of cars to back up behind slower moving traffic.

SR 37 becomes a freeway on Mare Island, approaching northern Vallejo. After it crosses over the Napa River Bridge, it continues as a freeway, overlapping the old highway alignment and passing north of the old road known as Marine World Parkway (due to its proximity to the Six Flags Discovery Kingdom, previously known as Marine World). SR 37 travels in a northeasterly direction along the White Slough before turning east as it crosses over State Route 29 and heads to its eastern terminus at I-80. In the early 1990s, the stretch between Fairgrounds Drive, which serves as the entrance to Discovery Kingdom, and Mini Drive was upgraded to a freeway. In 2004 and 2005, following over fifty years of complications, the remaining non-freeway section in Vallejo was upgraded as well.[4][5][6]

Route 37 is also known as Randy Bolt Memorial Highway from Route 29 to Skaggs Road, and Sears Point Toll Road, which was originally a toll road that ran from Route 121 to Vallejo.[7] This route is part of the California Freeway and Expressway System[8] and is eligible for the State Scenic Highway System.[9] However, it is not designated as a scenic highway by Caltrans.[10] 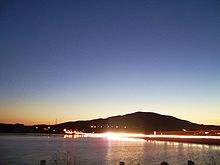 SR 37 at Sunset. Raceway Hill (in background) is the home of Infineon Raceway

The whole of SR 37 has been proposed to be built to freeway standards since the early 1950s. However, the proposal was met with many economic and environmental obstacles, making the task all but impossible for much of the route.

Plan to widen in Vallejo

The struggle to improve the portion of SR 37 between the Napa River Bridge and I-80 began in 1952, and lasted over fifty years. In 1955, after a proposition to turn much of the route into a toll road failed, it was decided a four-lane freeway would be the best decision. However, opposition from residents in surrounding neighborhoods as well as a federal oil embargo only allowed widening of the approach between Fairgrounds Drive and I-80. In 1977, a levee broke and flooded a portion of the developed land, turning it into protected wetlands with endangered species. Because of its new status, environmental studies were needed in order to continue the project.[6]

Soon after, the project was split into different phases[4] to handle problems with particular areas. It was first divided between the newly created marshlands and the section between Sonoma Blvd. (SR 29) and I-80. With Marine World being relocated, the city was able to the widen the latter section in 1992, as well as upgrade most of it to freeway standards.

While the Vallejo section of SR 37 was being built, another problem with the route would hinder its progress. The section between Sears Point and Mare Island was plagued with fatal accidents, earning its nickname of "Blood Alley". Between 1966 and 1970, twenty-seven people lost their lives to it. In a preliminary effort to reduce the fatalities, officials established both a daylight test section, requiring all cars to keep their headlights on during the day, and passing lanes. However, these efforts were ineffective.[11]

In 1993, local resident Jim Poulos campaigned to have a barrier erected after the death of his 18 year old son, Frankie, on Blood Alley. At this time, the situation with this stretch only worsened as the death toll between 1990 and 1996 rose to thirty-one. At first, Caltrans thought the barrier would make matters worse since it would be difficult for emergency vehicles to attend to accidents; environmental issues were also cited. Caltrans was waiting for the ability to create a causeway to span the area instead. Poulos continued his campaign despite opposition, and was granted the barrier in 1995. The barrier was not built without controversy, as it also eliminated the passing lanes. However, since the barriers were built, there were no longer any crossover accidents as of 2005.[3]

While the median was built, a few problems needed to be resolved in order for the road to work both safely and in an environmentally friendly way. Emergency personnel needed to quickly access accidents and provide them easy transport to nearby hospitals. To alleviate this problem, Caltrans implemented new electric gate technology, which would allow emergency vehicles to cut through certain parts of the median. The other problem was to both protect the plant life and the salt harvest mice which reside around the highway. As a result, crews placed timbers and sheeting to protect foliage, and they added holes into the median barrier to allow the mice to cross the highway.[12]

Display of the various components of the project including the SR 37/SR 29 interchange.

With the barrier complete, the focus of improvement changed back to Vallejo. There were still two phases to complete in order for the Vallejo portion of the route to be upgraded to a freeway. The two-lane section of road between Sonoma Blvd. and near the Napa River bridge, which ran through protected wetlands known as the White Slough, was both prone to flooding and traffic problems. In addition, the junction of Routes 29 and 37 was claimed to be a dangerous intersection. To fix these problems, Vallejo city officials decided to proceed with extending the freeway to Mare Island. After environmental studies on the White Slough, Caltrans widened and elevated that section of the road and converted it to a freeway. To accommodate bicycles and pedestrians, a cycleway was built along the eastbound side of the freeway. Finally, Caltrans completed the overpass which crossed SR 29, Broadway, and Mini Drive (bypassing Marine World Parkway, three traffic signalled intersections, and a railroad grade crossing). The project was completed in the summer of 2005,[6] and fully open to traffic on August 20, 2005.[13]