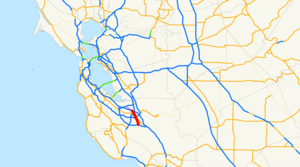 State Route 87, locally called Highway 87 or the Guadalupe Freeway, is a north-south entirely within , . Its name was changed from Guadalupe Parkway in 2004 after its entire constructed length was upgraded to a . Its southern terminus is at State Route 85 (West Valley Freeway); its northern terminus is at U.S. Route 101 (), just north of . The highway intersects with Interstate 280 () in downtown San José. Unusually, it crosses above Interstate 880 without an interchange. For most of its length, especially in downtown, the highway follows the course of the Guadalupe River.

A Guadalupe Parkway connection between Downtown San Jose and the present day US 101 had existed since the early 1960s; the road channeled traffic between the Bayshore Freeway and ramps that connected directly to Market Street. However, construction on a freeway over the same path and southward beyond Downtown began a decade later and stretched across 30 years.

The right-of-way for Highway 87 south of Interstate 280 includes two tracks for the Guadalupe line of 's system. Stations are accessible from the streets via staircases and elevators. Beyond 87's terminus, the line continues southeastward in the median of Route 85.

Highway 87, as defined legislatively, would have extended from its current northern terminus, skirting the edge of as the Bayfront Freeway to San Francisco, providing an eastern bypass to U.S. Highway 101 along the peninsula (Highway 101 itself being originally a bypass to along the peninsula). It would have ended at Highway 480 (the ) practically underneath the Bay Bridge. It would have also connected to the approaches to the unconstructed . It, along with Route 61, a similar project on the eastern shore of the Bay, was abandoned due to local opposition to the project that would have destroyed a nearly pristine wildlife habitat.

:"Note: Except where prefixed with a letter, s were measured in 1964, based on the alignment as it existed at that time, and do not necessarily reflect current mileage. The entire route is in San Jose, Santa Clara County."

The Highway 87 Bikeway is a 4.1 mile long pedestrian and bicycle path that runs alongside portions of Highway 87. The path was constructed by as part of the final phase of the State Route 87 project. It opened to the public on September 1, 1993. [ cite news |first=Brad |last=Kava |title=Highway 87, The Way to San Jose |format=fee required |work=San Jose Mercury News |page=1C |date=1993-09-17 |accessdate=2008-03-26] The north end of this path is at Willow Street (north of the Alma Street exit). The south end is at the 87-85 interchange. Along this route, the path runs along the east side of the freeway. The path diverges from the freeway for 0.7 miles near Curtner Avenue and again for 1.1 miles near Capitol Expressway, running along city streets near the highway. This path provides connections for other trails in the area, including the and . [cite web |url=http://www.sjparks.org/Trails/Hwy87/Hwy87.asp |title=Highway 87 Bikeway |accessdate=2008-03-27 |date=2008-02-14 |work=Parks, Recreation, and Neighborhood Services |publisher=City of San Jose]