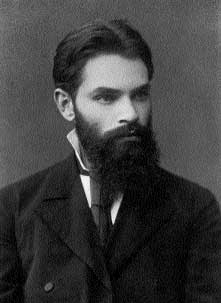 Aleksandr Mikhailovich Lyapunov (Александр Михайлович Ляпунов) ( &ndash; , all ) was a Russian , and . Sometimes his name is also written as Ljapunov, Liapunov or Ljapunow, and often improperly pronounced 'la-yapunov'.

Lyapunov was born in , . His father Mikhail Vasilyevich Lyapunov (1820-1868) was a well known and a head of the Demidovski . Because of the reaction of the university administration, after the departure of Lobachevsky, he gave up his work entirely in 1864 at the of the University of Kazan. He moved with his family on his wife's estate in Simbirsk province (now ), where he devoted his time to the education of his oldest sons, Aleksandr and Sergei (1859-1924). During long winter nights he stayed with his sons and he taught them assiduously with the aid of games on maps of the world. He possessed a lot of books in Russian, German and French on subjects as varied as , , , , , and . After the sudden death of his father Aleksandr was educated by his uncle R. M. Sechenov, brother of the famous physiologist . At his uncle's Lyapunov learned with his cousin, his intended Nataliya Rafailovna, who later became his wife. In 1870 his mother moved with her sons to , where he started to attend the third class of the gymnasium. He passed gymnasium in 1876 with distinction.

He studied at the Physico-Mathematical department of the University of Saint Petersburg, where he was a schoolfellow of Markov. In the beginning he listened to Mendeleyev's lectures on . After a month he transferred to the mathematics department of the university, but he continued attending the chemistry lectures. Mathematics was taught at that time by Chebyshev and his students Aleksandr Nikolaevich Korkin and . Lyapunov wrote his first independent scientific works under the guidance of professor of mechanics, D. K. Bobylev. In his fourth year he received the gold medal for a work on , which had been suggested by the faculty. This was the basis for his first published scientific work "About the equilibrium of solid bodies in vessels with arbitrary forms, filled with dense fluids" "(О равновесии тяжелых тел в тяжелых жидкостях, содержащихся в сосуде определенной формы") and "About the potential of hydrostatic pressure" "(О потенциале гидростатических давлений"). In both works he used many new approaches and developed new rigorous proofs of a few earlier incomplete theorems from hydrostatics. With the first work he gained the title of candidate in mathematical sciences. Now he was able to leave the university to prepare for a professorial calling.

He graduated in 1880. He received a Master's degree in in 1884 with the thesis "About the stability of elliptic forms in the equilibrium of turbulent fluid" "(Об устойчивости эллипсоидальных форм равновесия вращающейся жидкости"). This work treated an important and difficult task about understanding the shapes of celestial bodies. This task was offered by Chebyshev to Zolotarev and to and Chebyshev was aware of the difficulty. As was said by , "Chebyshev saw in the young man such an immense research power, that he had dared to lay on him such a toilsome task". Lyapunov had already begun to study this in his previous two-years attempts at solving the task. After the public announcement his work instantly attracted the attention of mathematicians, mechanicians, physicists and astronomers all over the world.

In 1885 he became private reader of the in the chair of mechanics, where he replaced V. G. Imshenecky, who had been chosen as a member of the s. Lyapunov had lectured already from 1880 at the Department of Mechanics and this had taken him a lot of time. His student and collaborator, Steklov, said about his fine lectures: "A handsome young man, by his appearance almost like the other students, came before the audience, where there was also an old dean, professor Levakovsky, who was respected by all students. After the dean had left, the young man with a trembled voice started to lecture on a theme about the dynamics of a point, instead of a theme from the dynamics of systems. This subject was already in lectures by a professor Delaryu. I was in the fourth class. I had listened to the lectures in of Davidov, Cinger, Soletov and Orlov. I was in the University of Kharhov already for two years, so I was familiar with the lectures on mechanics. But I hadn't known the subject from the beginning and I had never seen it in any textbook. So in this way boredom with the lecture had collapsed in ruins. Aleksandr Mikhailovich had earned the respect of the audience for an hour with the power of a natural gift so seldom seen in such a youth. He didn't know this of course. From this day on students considered him with different eyes, and they showed him special respect. Many times they even didn't dare to speak with him, to avoid showing their ignorance". Lyapunov lectured at the university on themes from theoretical mechanics, s of s and the theory of probability. These lectures were never published and they remained only in the notes of students. He lectured about mechanics in six areas: , the dynamics of a particle, the dynamics of systems of particles, the theory of attracting forces, the theory of the deformation of solid bodies, and hydrostatics. At the same time he lectured on between 1887 and 1893 at the Technological Institute at Kharkov.

In 1892 he was awarded his Ph.D. with the thesis "A general task about the stability of motion" ("Общая задача об устойчивости движения"). A similar thesis had been defended ten years earlier by , a founder of the . After the doctorate, Lyapunov became a full professor at . After the death of Chebyshev in 1894, Lyapunov became in 1901 a head of applied mathematics at the University at Saint Petersburg, where he was entirely devoted to tutorage and research work.

His work in the field of differential equations, , the stability of systems and is very important. His main preoccupations were the stability of equilibria and the motion of mechanical systems, the model theory for the stability of uniform turbulent liquid, and particles under the influence of . His work in the field of was very important for subsequent advances of this field. His work from 1898 "About some questions, connected with Dirichlet's tasks" ("О некоторых вопросах, связанных с задачей Дирихле") contains a study of the properties of around charges and s, continuously distributed along any surface. His work in this field is in close connection with the work of Steklov. Lyapunov developed many important approximative methods. His methods, today named , which he developed in 1899, make it possible to define the stability of sets of ordinary differential equations. He elaborated the modern rigorous theory of the stability of a system, and the motion of a mechanical system on the basis of a finite number of parameters. In probability theory, he generalised the works of Chebyshev and Markov, and he finally proved the using more common conditions than his forerunners. The method he used for the proof is today one of the foundations of probability theory. From 1899 to 1902 he was a head of Kharkov mathematical society and an editor of his "News". On the he was elected as a corresponding member of the Russian Academy of Sciences, and on the as a fully entitled member of the Academy in the field of applied mathematics.

With his researches on , he opened a new page in the history of global science, and showed the inaccuracy in the knowledge of several foreign scientists. In 1908 he participated at the 4th Mathematical congress in . At this time he took part in the publication of Euler's selected works, and he was an editor of the 18th and 19th part of this miscellany. By the end of June 1917, he went with his wife, who was seriously ill, to his brother Boris in , (now ). His wife's impending death, his own partial blindness, and the generally bad conditions for life, all contributed to his anxiety. In spite of this he delivered his last lecture about the form of celestial bodies at the invitation of the Department of Physics and Mathematics at Odessa. On his wife died, and on the same day he shot himself. He then lay unconscious for a few days till his death.

He usually worked four to five hours at night, and many times even the whole night. Once or twice he visited the theatre, or went to some concert. He had many students. But for the few who really knew him, Lyapunov was a rather raptured man. He had a lean figure, outwardly he acted pretty rude, otherwise he had a hot-blooded and sensitive temper. He was an honorary member of many universities, an external member of the Academy in Rome and a corresponding member of the Academy of Sciences in Paris.

In 1992, the International Journal of Control (Taylor & Francis) published a centennary issue (volume 55, number 3) in memory of Lyapunov. Subsequently, the company Taylor & Francis published an English translation of Lyapunov's 1892 work on stability of motion, together with a biography and bibliography.

A.M. Lyapunov, "The general problem of the stability of motion", Taylor & Francis, London, 1992. (The English translation was done by A.T. Fuller. The biography and bibliography were done by V.I. Smirnov and J.F. Barrett, respectively.) ISBN 0748400621

Among others he wrote such works as:
* 1890, "Concerning the constant rotational motion of rigid bodies in fluids"