Arrows
This article is about a Formula One team. For other meanings of 'Arrow' and 'Arrows', see Arrow (disambiguation).

Arrows Grand Prix International was a British Formula One team active from 1978 to 2002. For a period of time, it was also known as Footwork.

The team was started in Milton Keynes, England and produced their first Formula One car in just 53 days. Arrows signed up Riccardo Patrese who scored points in the US West Grand Prix at Long Beach in the car's third race.

Ambrosio left the team after having being jailed for financial irregularities in Italy. Shadow sued for copyright infringement, claiming that the Arrows FA/1 was just a copy of the Shadow DN9. The team decided to build a new car called the A1. This was completed in 52 days and appeared the day after the High Court in London banned the team from racing the FA/1.

Equipped with the A10B chassis and a BMW-Megatron engine, drivers Eddie Cheever (pictured at the 2008 Goodwood Festival of Speed) and Derek Warwick ensured that 1988 was Arrows' most successful year in Formula One.

In September 1978, in the Italian Grand Prix at Monza, Patrese was involved in an accident which claimed the life of Ronnie Peterson and he was banned from racing at the following race (the United States Grand Prix) by his fellow drivers. In 1981, Patrese scored the team's only Formula One pole position in Long Beach, which he led until retiring with mechanical problems. Arrows finished joint eighth in the Constructors Championship that year.

In 1984 with BMW M12 turbo engines and sponsorship from cigarette company Barclay things got much better. That year they were ninth in the Constructors Championship and eighth in 1985. At the 1985 San Marino Grand Prix, Thierry Boutsen finished third behind Alain Prost and Elio de Angelis. However, after the race, both Prost and de Angelis were disqualified because their cars were 2kg underweight, giving Boutsen the race win. This meant that Arrows won a race for the first time in their career. But later, de Angelis was reinstated, winning for the second time in his career, and Boutsen dropped to second place, denying Arrows their first race win. In 1987, BMW removed support and the engines were badged Megatron, but the British team had their best seasons yet, finising sixth in 1987 and fifth in 1988 (the final year for turbocharged engines) thanks to frequent points finishes by drivers Eddie Cheever and Derek Warwick.

Japanese businessman Wataru Ohashi invested in Arrows in 1990 and the cars started displaying the Footwork logo prominently. The team was officially renamed Footwork in 1991, and secured a deal to race with Porsche engines, the car was woefully uncompetitive and in 1992 they switched to Mugen. Arrows retained the Footwork name until Ito pulled out before the 1996 season, whereupon the name of the team was changed back to Arrows. Regardless, Jackie Oliver had retained control throughout the entire period.

At the 1997 British GP, Hill scored his first point for the Arrows team.

In March 1996, Tom Walkinshaw bought a stake in the team, and in September Walkinshaw signed up World Champion Damon Hill and hired wealthy Brazilian Pedro Diniz to help pay for Hill's salary. The team nearly secured a maiden victory at the 1997 Hungarian Grand Prix where Hill started in third position and passed Michael Schumacher to take first place. A component failure in the final laps of the race saw him finish second. In the following years Walkinshaw would buy the rest of Oliver's shares. Brian Hart, who had been the engine supplier since 1995, was employed by the team, designing the Yamaha-badged engines, and later the Arrows-badged engine, in 1998.

In the 2000 Season, Jos Verstappen returned to Arrows where he had driven in 1996 alongside teammate Pedro de la Rosa. The chassis was a Arrows A21 with a Supertec engine. The Supertec engine was not the most powerful, but was still very good, and had been developed further for this season. Allied to an excellent aerodynamic package, and good rear end stability, it allowed the Arrows A21 to consistently set the best straight line speeds around the circuits. Generally, both Verstappen and de la Rosa were competitive within a close midfield. During the 2000 season, the Arrows team took part in a 13-part TV series named 'Racing Arrows' which followed the team and drivers throughout the year. It was shown on British TV channel ITV in 2001 during late-night slots.[1]

A switch to Asiatech V10s in 2001 and the loss of a lot of staff left the team rather weaker in 2001 when Tom Walkinshaw decided to replace de la Rosa with F1 debutant Enrique Bernoldi.The team struggled through the season and Verstappen scored the team's only point in Austria. 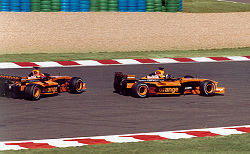 Heinz-Harald Frentzen and Enrique Bernoldi deliberately failed to qualify at the 2002 French Grand Prix as the team's financial problems worsened.

For 2002, Tom Walkinshaw did a deal to use Cosworth V10 engines and retained Bernoldi (with support from Red Bull) but dropped Verstappen in favour of Heinz-Harald Frentzen who became available when Prost Grand Prix closed down. This caused Verstappen to successfully sue for breach of contract. That year also saw a costly payout to Pedro Diniz after unsuccessfully suing the Brazilian, who had taken his funding to Sauber for 1999. The team faced a third litigation from Frentzen, who was on contract by a race-by-race basis and who had not yet been paid. Arrows ran out of money in the midseason and did not appear at all the races at the end of the year, their drivers deliberately failing to qualify for the French Grand Prix. As a result it went into liquidation at the end of the season, also forcing TWR to close.[2]

A consortium fronted by Phoenix Finance - run by Charles Nickerson, a friend of Walkinshaw - purchased part of the team's assets, specifically the engines, believing that together with their purchase of old Prost Grand Prix assets, it would gain them entrance for the 2003 season. However, their application was rejected by the FIA.

In their chequered history, Arrows set the unenviable record of 382 races without a win. (Although, since at 97 of those races the car was officially named "Footwork," Minardi holds the record for most races for a single marque without a win, with 349).

Further use of Arrows chassis

The chassis and intellectual property rights for the chassis were later bought by Paul Stoddart, the then-head of the Minardi team as a potential replacement for his own team's chassis. The new Super Aguri F1 team bought the 2002 cars and ran them (with some modifications) as the SA05 during the first races of the 2006 season. One of these cars was said to have been on display at Melbourne airport before being acquired by Super Aguri. After being returned to the factory to be updated to comply with the 2006 regulations, the car was taken back to Melbourne for the Australian Grand Prix. An update still based on the same chassis was designated the SA06 and made its début at the 2006 German Grand Prix. The SA05 and SA06 did not score a single point in the 2006 season.