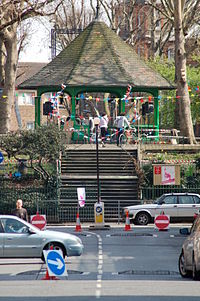 The Boundary Estate bandstand at Arnold Circus, built with the rubble of the Old Nichol slum, is the centrepiece of the estate

The estate, constructed from 1890, was one of the earliest social housing schemes, and was built by the London County Council as the world's first council housing, replacing the Friars Mount slum[1] in the Old Nichol. The demolition rubble was used to construct a mound in the middle of Arnold Circus at the centre of the development, housing a still extant bandstand. The estate consists of multi-story brick structures, surrounding the central mound. 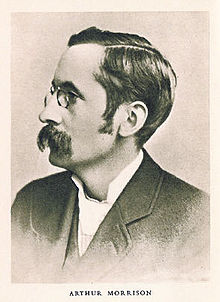 Arthur Morrison, author of A Child of the Jago, an indictment of conditions in the Old Nichol

Henry Mayhew visited Bethnal Green in 1850, and noted for the Morning Chronicle the trades in the area: tailors, costermongers, shoemakers, dustmen, sawyers, carpenters, cabinet makers and silkweavers. In the area, it was noted:

roads were unmade, often mere alleys, houses small and without foundations, subdivided and often around unpaved courts. An almost total lack of drainage and sewerage was made worse by the ponds formed by the excavation of brickearth. Pigs and cows in back yards, noxious trades like boiling tripe, melting tallow, or preparing cat's meat, and slaughter houses, dustheaps, and 'lakes of putrefying night soil' added to the filth[3]

The vicar of St. Philip's, the church serving the Nichol, quoted by Frederick Engels, in 1844 had found that conditions were far worse than in a northern industrial parish, that population density was 8.6 people to a (small) house, and that there were 1,400 houses in an area less than 400 yards (370 m) square[4]; and in 1861 John Hollingshead, of the Morning Post, in his Ragged London noted that the Nichol had grown even more squalid in the last 20 years as old houses decayed and traditional trades became masks for thieves and prostitutes. The Builder in 1863, noted the numbers inhabiting unfit cellars, the lack of sanitation and that running water was only available for 10–12 minutes each day (excepting Sundays!)[5]. 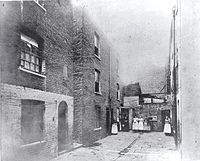 The clearance of the Old Nichol Street Rookery, as it was notoriously known, was the result of an energetic campaign by the local incumbent, Reverend Osborne Jay of Holy Trinity[6], who arrived in the parish in December 1886. Charles Booth had already noted the extreme poverty in the area in his study of London poverty[7]. Nearly 6,000 individuals were crammed into the packed streets. The death rate was twice that of the rest of Bethnal Green, and four times that of London. One child in four died before their first birthday. Jay persuaded Arthur Morrison to visit the area, and the result was the influential A Child of the Jago, a barely fictionalised account of the life of a child in the slum, re-christened by Morrison as "The Jago": 'What was too vile for Kate Street, Seven Dials, and Ratcliffe Highway in its worst day, what was too useless, incapable and corrupt - all that teemed on the Old Jago'. Demolition actually began before the publication of the book.

Such was the success of the campaign, that the Prince of Wales (Bertie) officially opened the estate in 1900, saying Few indeed will forget this site who had read Mr Morrison's A Child of the Jago.

While the new flats replaced the existing slums, where many had lived below street level and in appalling conditions, with decent accommodation for the same number of people, it wasn't the same group of people. The original inhabitants were forced further to the East, creating new overcrowding and new slums in areas such as Dalston and Bethnal Green. At this time, no help was available to find new accommodation for the displaced, and this added to the suffering and misery of many of the former residents of the slum.

The impresarios and brothers Lew Grade and Bernard Delfont (born Winogradsky) moved to the Boundary Estate in 1914, from nearby Brick Lane and attended Rochelle Street School[8]. At that time, 90% of children attending the school spoke Yiddish.

The flats remain and are Grade II listed,[9][10] together with the bandstand.[11] In their day, they were revolutionary in their provision of facilities for residents. Today, despite the lack of some modern amenities they remain popular with tenants and there is an active community. The Rochelle School is now a community arts centre.

The estate radiates from a centrepiece roundabout, Arnold Circus, formed around a garden with a bandstand. It is now being preserved by the Friends of Arnold Circus and has received grants for regeneration. As of March 2010 restoration work is underway on the bandstand, and is due to be completed in May 2010.

Arnold Circus is also a mark point on several ley alignments including Alfred Watkins' "Strand Ley"[12] and "The Coronation Line".[13]. One of the roads that link into the circus is the northern extension of Club Row, a part of Brick Lane market; where the headquarters of George Galloway's Respect Party is situated.