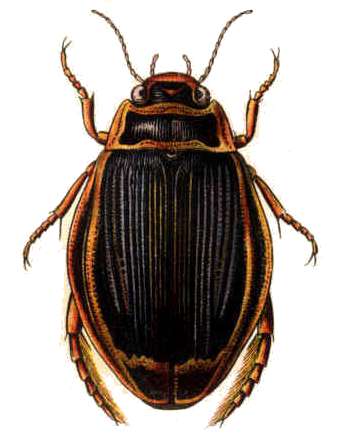 Adephaga (from Greek "adephagos", 'gluttonous'), with more than 40,000 recorded species in 10 families, is a suborder of highly specialized and the second largest suborder of the order . Members of this suborder are adephagans, a term which notably include s, s, s, and s. The majority of the species belong to the family of carabids, or ground beetles ().

Adephagans have simple feelers with no or clubs. The galea of the first usually consists of two segments. Adult adephagans have visible notopleural suture. The first visible abdominal sternum is completely separated by the hind coxae, which is one of the most easily recognizable traits of adephagans. There are 5 segments on each foot.

The of the hindwing is near the wing tip. The ends at this fold, where it is joined by a .

Adephagans have four s. Unlike in other beetles, s alternate with s in the s of adephagans. The coiled, tubular consist of a single follicle; and the ovaries are .

All families of adephagan have paired pygidial s located postero-dorsally in the , which are used for secreting chemicals. The glands consist of complex invaginations of the lined with epidermal cells contiguous with the . The glands have no connection with the and open on the eighth abdominal .

Secretions pass from the s, which are aggregations of secretory cell, through a tube to a reservoir lined with muscles. This reservoir then narrows to a tube leading to an opening valve. The secretory lobes differ structurally from a taxon to another: it may be elongate or oval, branched basally, apically or unbranched.

The secretion is realized in one of the following three manners:
*Oozing: if the gland is not muscle-lined, the discharge is limited in amount,
*Spraying: if the gland is muscle-lined, which is typically the case of carabids, the substances are ejected more or less forcefully,
*Crepitation: only associated with the carabids and several related species. See for a detailed description of the mechanism.

The secretion differ in the chemical constituents, according to the taxa. Gyrinids, for instance, secrete such as , , or . Dytiscids discharge s, s and s, especially . Carabids typically produce s, particularly , and , but also s, s, s, aromatic aldehydes and s. Accessory glands or modified structures are present in some taxa: the and also possess paired prothoracic glands secreting s; and the Gyrinidae are unique in the extended shape of the external opening of the pygidial gland.

Habitats range from caves to canopy and alpine habitats. The body forms of some are structurally modified for adaptation to habitats: members of the family live at the air-water interface, rhysodines in , paussine carabids in s.

Some species are , such as pseudomorphine carabids.

The e are active, with well-ized cuticle, often with elongate and five-segmented legs, the foot-segment carrying two claws. e have a fused labrum and no e.

Adephagans diverged from their sister group in the late , the most recent common ancestor of living adephagans probably existing in the early , around 240 million years ago. Both aquatic and terrestrial representatives of the suborder appear in fossil records of the late Triassic. The Jurassic fauna consisted of s, s, s, and -like forms. The familial and tribal diversification of the group spans the , with a few tribes radiating explosively during the .

The of adephagans is disputed. The group is usually divided into two main groups:
*The , comprising the two terrestrial families and (the Trachypachidae is sometimes considered a subfamily of the Carabidae), and
*The , gathering all other families, which are aquatic.

This division is often criticized, as mounting evidence is pointing out that the two groups are not .