Mount Gambier is the largest regional city in South Australia located approximately 450 kilometres south of the capital Adelaide and just 17 kilometres from the Victorian border.

It takes its name from the Mount Gambier, a crater sighted in 1800 by Lieutenant James Grant from the survey brig, HMS Lady Nelson, and named for Lord James Gambier, Admiral of the Fleet.

It is known for its interesting geography, particularly its volcanic features and the Blue Lake. 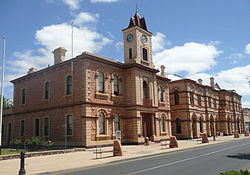 Before European settlement, the Buandig (or Boandik) people were the original Aboriginal inhabitants of the area. They called it 'ereng balam' or 'egree belum', meaning 'home of the eagle hawk'.[4]

The peak of the extinct Mount Gambier crater was sighted in 1800 by Lieutenant James Grant from the survey brig, HMS Lady Nelson, and named for Lord James Gambier, Admiral of the Fleet.

The Henty brothers who owned large holdings in Portland, Western Victoria claim to the land, were forced to retreat when the lands were granted to Evelyn Sturt, the brother of the explorer Charles Sturt. Industries soon began to appear. The Post Office opened on 22 September 1846,[5] John Byng built the Mount Gambier Hotel in 1847, and Dr Edward Wehl arrived in 1849 to begin a flour-milling operation.

On 9 December 1954, Mount Gambier was officially declared a city, and is now widely recognised as having the prestigious title of most important centre in south-east South Australia.[6] 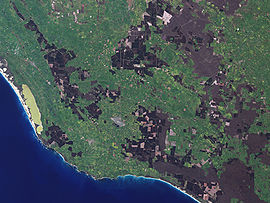 Mount Gambier and region as seen from space

The urban area is located mainly along the northern slopes and plain of a maar volcano of the same name, Mount Gambier. Comprising several craters it is part of the Newer Volcanics Province complex of volcanoes. One of these contains a huge lake of high-quality artesian drinking water which changes colour with the seasons. In winter, it is a steel grey and then changes to a spectacular cobalt blue in the summer, giving rise to its name, Blue Lake. This 70-metre deep lake also accommodates a range of unusual aquatic flora and fauna, in particular fields of large stromatolites. There are several other craters in the city including Valley Lake and Mount Schank and the region has many water-filled caves and sinkholes.

The Mount Gambier urban area extends to suburbs including Suttontown, Mil Lel and Worrolong to the north, Glenburnie to the east, Compton to the west and Moorak and O B Flat to the south.

The government in the south-east area of the state, consisting of three local councils, was based around a single administration, many residents of Victoria used to look across the border to Mount Gambier as their centre. Consequently, during the 1970s many elderly locals relocated to Victor Harbor and Moonta, both rural areas but with more resources available to cope with an ageing population. A 1976 study found that less than 10 per cent (around 160 people) of residents aged over 65 had lived in the area for less than 5 years, leading to a lack of specific aged-care facilities.[7]

According to the 2006 Census the population of the Mount Gambier census area was 23,494 people, making it the largest urban area in the state outside of Adelaide, and the 50th largest urban area in Australia. Approximately 51.7% of the population were female, 84.9% were Australian born, over 91.5% of residents were Australian citizens and 1.6% were indigenous.

The most popular industries for employment were Log Sawmilling and Timber Dressing (8%), School Education (4.8%) and Retail Trade (3.8%), while the unemployment rate is approx. 7%. The median weekly household income is A$814 or more per week, compared with $924 in Adelaide. 26.9% of the population identify themselves as being free of religion, a lower 21.5% regard themselves as Catholic.

Mount Gambier has a temperate climate with warm dry summers and cool wet winters. July is the wettest month with an average of 99.4mm falling on 21 days whilst February normally records the lowest rainfall with an average of 25 mm on an average 8 days. The highest ever temperature recorded in Mount Gambier was 43.6 °C on 16 February 1983 (Ash Wednesday fires) and the lowest ever temperature recorded was -3.9 °C on 20 June 1950 and 2 July 1960.[9]

The town is located within a climatic transition zone between oceanic and Mediterranean climate.

The town's major industries are agriculture, forestry, trucking and tourism.

Tourism generates around $100 million for the Mount Gambier economy.[11] The city is a major accommodation gateway for the region. Major tourism attractions include the Blue Lake and Valley Lake wildlife park and caves. The region also has many water-filled caves and sinkholes which attract cave divers from around the globe, and such places as Ewens Ponds, Piccaninnie Ponds, Tantanoola Caves, Umpherston Sinkhole, Cave Gardens and Engelbrecht Cave.

Mount Gambier sits on a number of highways which connect the city to other major towns in the region, as well as to Adelaide and Melbourne.

Before conversion of the Melbourne-Adelaide railway to standard gauge in 1995, Mount Gambier was connected to Adelaide on the broad gauge network via Naracoorte, Keith and Tailem Bend. Normal commercial passenger services to Adelaide ceased in 1990, while limited freight services operated until the line was disconnected from the national network.

The Limestone Coast Railway, operated tourist services on the abandoned lines from Mount Gambier to Penola and Coonawarra for a number of years with retired suburban railcars. However due to increased insurance costs they ceased services in 2006.

Mount Gambier Airport is located a few kilometres north of the city via the Riddoch Highway. The city is served only by Regional Express, which flies Saab 340 aircraft to Adelaide and Melbourne a number of times a day.

The airport was once the main base of O'Connor Airlines, which also flew to Adelaide and Melbourne. However the company ceased trading in December 2007.

The town is serviced by five Reception to Year 7 (R-7) Primary schools:

There are two High Schools for Year 8 to 12:

The local newspaper for Mount Gambier, the Limestone Coast and South East region of South Australia is The Border Watch. It is published and available in the local area every Tuesday through Friday (with the exception of some public holidays such as Christmas Day). Daily newspapers from Melbourne (Herald Sun and The Age) and Adelaide (The Advertiser) as well as national newspapers such as The Australian and The Australian Financial Review are also available in Mount Gambier and the southeast SA region. Some newspapers from nearby towns such as Millicent and Penola, specialty newspapers like the British International Express weekly newspaper, agricultural newspapers such as The Weekly Times newspaper from Victoria and The South Australian Stock Journal (published by Rural Press) and The Independent Weekly from Adelaide are also available from local newsagents.

Due to the close proximity to the Victoria\South Australia state border, most people in Mount Gambier and some adjacent areas of southeast South Australia can receive television services from Western Victoria. These channels broadcast from the Mount Dundas transmitter near the town of Cavendish, Victoria. The transmitter site is located approximately 100 kilometres northeast of Mount Gambier and broadcasts all the television channels from Western Victoria (Prime7 Television (AMV), WIN Television Victoria (VTV), Southern Cross Ten (BCV), the ABC and SBS Victorian services) as well as the new digital free-to-air channels such as ONE, Eleven, GO!, GEM (an acronym of General Entertainment and Movies), 7Two (an acronym of "72") and 7mate that are not currently provided by the local WIN TV station in Mount Gambier, but WIN hope to have these channels up and running by November 2011.

Some ABC radio services can also be received from the nearby town of Naracoorte and from Western Victoria.

The town has only one national sporting side which is the Mount Gambier Pioneers.The Pioneers entered the South Eastern Basketball League in 1988 and now called the SEABL (South East Australian Basketball League). The Pioneers play at the Icehouse (Mount Gambier Basketball Stadium) which seats over 1,000 people and is also home to the Mount Gambier Basketball Association. The Pioneers have had one championship which occurred in 2003, the side was rated second in the top 5 sides to have ever played in the league by a group of special selectors. In 2011 the current President Dave Bowden, Head Coach Andrew Summerville and Club Captain Dallas Jefree will lead the team into its 24th season in the SEABL, with two new imports Fernandez Lockett and C.J. Webster. The 2011 side will have 9 senior players with 7 development squad members.[15]

There is also a range of different sporting leagues and clubs in Mount Gambier and surrounding regions, including soccer, netball, basketball, tennis, hockey, cricket, swimming, cycling, triathlon[16] and golf.[17]

Mount Gambier is the home of "The Alex Roberts 100 Mile Classic", a cycling event that lays claim to the longest continuing open cycling event in South Australia. The event held annually by the Mount Gambier Cycling and Triathlon Club.[16]

The 120m Mount Gambier Gift held annually on the first Saturday in December at Vansittart Oval is the 2nd richest professional footrace in South Australia. Resurrected in 2001 the athletic carnival includes races from 70m to 1600m and attracts athletes from all over Australia, mostly from South Australia and Victoria. Of the ten Mount Gambier athletic carnivals held to date, three Victorians have won the 120 m Gift. On 4 December 2010, the race was won by 20-year-old Wallace Long-Scafidi.[18]