Mealworms are the larval form of the mealworm beetle, Tenebrio molitor, a species of darkling beetle. Like all holometabolic insects, they go through four life stages: egg, larva, pupa, and adult. Larvae typically measure about 2.5 cm or more, whereas adults are generally between 1.25 and 1.8 cm in length. 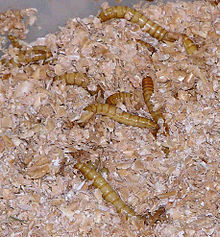 Mealworms are typically used as a food source for reptile, fish, and avian pets. They are also provided to wild birds in bird feeders, particularly during the nesting season, when birds are raising their young and appreciate a ready food supply. Mealworms are high in protein, which makes them especially useful as a food source. They are also commonly used for fishing bait.

They can be purchased at most pet stores and bait shops, and are available via mail order or internet suppliers (by the thousand). Mealworms are typically sold in a container with bran or oatmeal for food.

When rearing mealworms, commercial growers incorporate a juvenile hormone into the feeding process to keep the mealworm in the larval stage and achieve an abnormal length of 2 cm or greater.

Tenebrio molitor is also used for biological research. Its relatively large size, ease of rearing and handling, and status as a nonmodel organism make it attractive for proof-of-principle study. Researchers worldwide, but particularly in Sheffield (UK) and Pusan (Korea), currently use this beetle as a model system for studies in biology, biochemistry, evolution, immunology and physiology. 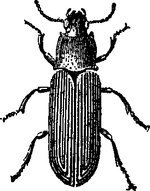 Dependent on incubation temperature, just days after mating, the female will burrow into soft ground and lay about 500 eggs.

After four to 19 days, the eggs will begin to hatch. These tiny mealworm eggs are food for their predators, such as reptiles.

During the larval stage, mealworms will undergo repeated molting between bouts of eating various vegetation or dead insects. This takes place 9-20 times (instars) as it gets too big for its current exoskeleton. During its last molt, it loses its carapace before curling into its pupal form.

The mealworm remains in its pupal stage from three days to around 30 days (dependent on incubation temperature and overwintering). The pupa starts off a creamy white color, and changes slowly to brown during its pupation.

A mealworm pupa recently molted from the larva stage, the darker object is the discarded larva skin.

Mealworms may be easily raised on fresh oats, whole wheat bran or grain, with sliced potato or carrots and little pieces of apple as a water source.

Mealworms have been incorporated into tequila-flavored novelty candies. However, mealworms are not traditionally served in tequila or mezcal drinks, the latter sometimes containing a larval moth (Hypopta agavis). 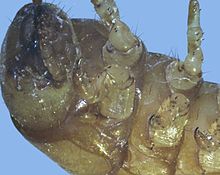 Detail photo of a mealworm.

Mealworms are commonly used as feed for reptiles, fish, and birds, and are easily obtained from supply companies. They grow best in well-ventilated containers eight to ten inches deep with large surface areas, and smooth sides to prevent them from escaping. The mealworms are mostly nocturnal and prefer a dark environment. The food for the larvae can be flour or cereals. Moisture is provided by small amounts of fruit or vegetable matter that should be replaced before it goes moldy.

Adult beetles that arise from the larval population are moved to another container prepared with the same food mixture, to lay eggs for more young worms, which are transferred into the first tray, to provide a continuous supply of worms.