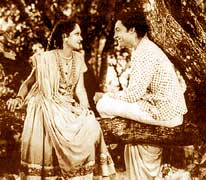 "Achhut Kanya" (: अछूत कन्या, : اچھوت کنیا, translation: "Untouchable Maiden") is a 1936 film. Among the early super-hits in the film industry, the film deals with the social position of girls and is considered a reformist period-piece.

The film was one of several successful collaborations between , , , and their leading lady, . Music is by and lyrics by .