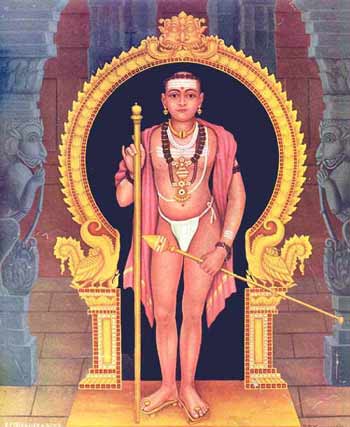 Palani Murugan Temple is one of the most famous temples in . It is located in the township of , 100 km southeast of and a similar distance northwest of , and near the famous , .

As per the Hindu mythology, once visited the divine court of at . Lord Shiva was with his consort, Goddess Shakti, and their two children, and Lord Subrahmanya. Sage Narada gave Lord Shiva a fruit and told him that it was a special one, the fruit of wisdom (Jnana-Pazham).

Lord Shiva wanted his children to have the fruit of wisdom. However, when he offered it to them to be shared between the two sons, Sage Narada requested not to cut the fruit in two, lest the power be diminished. As a result, they had to decide to conduct a simple competitions to decide on who should have the fruit. Shiva and Shakti decided that the son who first circles the Earth would get the fruit. Immediately accepting the challenge, Lord Murugan, started his journey around the globe on his divine vehicle, the peacock or "mayil".

Lord Ganesha, who believed that his parents were his world, circumbulated Lord Shiva and Goddess Shakti and claimed the mango fruit. Lord Subrahmanya returned to Mount Kailash, only to find that Lord Ganesha had already won the contest. Lord Murugan felt he had been deceived and decided to leave Mount Kailasam. He reached to top of what is today called "Pazhani malai" (the Hill of Pazhani) and set up his abode there.

Goddess Shakti and Lord Shiva rushed to the hill and tried to pacify their son, calling him, "Gnana Pazham Nee appa" (in Tamil, "you are the fruit - Pazham; of wisdom - Gnana"). Hence this place came to be called "Pazhani", or Palani.

Legend also has it that a divine siddhar named "Boghar", created the idol of Dhandayuthapaani using navapashanam, an amalgam made from 9 poisonous elements which on getting mixed develops highly curative powers for many ailments of the human body, according to Sidhha Medicine practice. A small portion with a deity, dedicated to Boghar is also placed inside the temple. the adjoining walls depicts the history of the creation and other facts related to the temple.