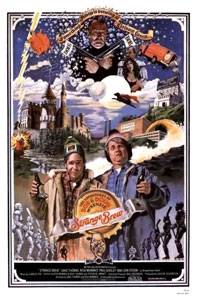 "The Adventures of Bob & Doug McKenzie: Strange Brew" is a 1983 film starring the popular "SCTV" characters , played by Dave Thomas and , who also served as co-directors. co-stars. The story is loosely based on the an play "", with the McKenzie Brothers taking the roles of .

Most of the film was shot in the [ [http://www.imdb.com/title/tt0086373/locations Internet Movie Database] - Filming locations for The Adventures of Bob & Doug McKenzie: Strange Brew] area. , Kitchener and Hamilton

Two unemployed brothers, , are in a bind when they give away their father's beer money and then run out of beer. The brothers place a mouse in a beer bottle in an attempt to get free Elsinore beer from the local beer store, but are told by the no-nonsense clerk—under threat of being shoved into a bottle themselves—to take up the matter at the Elsinore brewery instead. After presenting the evidence to management at , the brothers are given jobs on the line inspecting the bottles for mice. They take this opportunity to drink lots of free beer off the line; later, they surprise their parents with a van full of Elsinore products.

Meanwhile, the evil Brewmeister Smith (von Sydow) is perfecting a secret plan to take over the world by putting a drug in Elsinore beer which, while otherwise rendering the consumer docile, makes him or her attack others when stimulated by musical cues (hence the title "Strange Brew"). Smith tests this adulterated beer on patients of the conveniently located "Royal Canadian Institute for the Mentally Insane", which is connected by underground tunnels to the brewery. The effects of the tainted beer are demonstrated in an extended sequence during which the mental patients don armored ""–style hockey garb and, after consuming the beer, respond to synthesizer music by variously playing hockey, skating together in sync, and brawling on the ice.

It seems the former brewery owner has died under mysterious circumstances and his daughter, Pam (), having recently turned 21, has been given full control of the Elsinore brewery. Pam's uncle Claude (), in the interim, had married her widowed mother and is reluctant to give up his recently-gained control of the brewery. The reason for this is further revealed to be that Claude is collaborating with Brewmeister Smith, for whom he is a barely-adequate flunky, providing a cover for the Brewmeister's nefarious plans.

Bob and Doug blunder into the midst of these plans when they rescue Pam from a malfunctioning security gate and develop a friendly relationship with her. While playing an old Galactic Border Patrol arcade game in the employee lounge of the brewery, they stumble upon the true story of Pam's father's murder and the fact that Uncle Claude was deeply involved. Additionally, while poking around the brewery, Bob and Doug meet a one time hockey great, Jean "Rosie" LeRose (), whom Bob recognizes from the hockey card he has back home at his parents' house. Having suffered a career-ending and fallen under Smith's control, Rosie gets locked up at the Insane Asylum but is determined to fight against the Brewmeister's plot for world domination.

Plenty of ensues, including: Bob and Doug playing with an ECT machine and squabbling over whose turn it is to receive the shock; a tearful separation scene where we learn that the brothers have never been out of each other's company; Bob drinking a whole vat of beer and swelling up as big as a house; and the McKenzies' dog Hosehead, who resembles a large skunk, flying like and shutting down an celebration. In the end, the McKenzie Brothers save the day and Pam and Rosie find true love. As for the contaminated beer, Bob and Doug are allowed to haul away the lot to apparently try to drink it all.

A loose style is employed in the movie; the opening shows the McKenzies at movie premiere for "Mutants of 2051 A.D.", which they return to at the close of the main story.

The movie is laced with references to Shakespeare's "". Pam's uncle, Claude Elsinore, is named after the uncle in "Hamlet", Claudius, who in the play poisons his brother, marries his sister-in-law, and takes over the kingdom. Likewise, Mrs. Elsinore's first name is Gertrude, also the name of Hamlet's mother in the play. Bob and Doug play the role of Rosencrantz and Guildenstern, Hamlet's two dimwitted friends who ultimately get double-crossed into a plot to kill the prince. Furthermore, the name of the company, , is also the name of the Danish castle in "Hamlet". Also, the name "Hamlet" could be taken for the female name of "Pamela", which is the name of the female protagonist of the movie.

*The 2007 PC game "" makes an allusion to the movie with the NPC character "Mac Kensie" who gives the adventurer a series of quests to find ingredients to make his potion called "". Once one of the steps of the quest is complete the character even quotes the movie saying "If I didn't have puke breath right now I'd kiss you."

*The 2000 release Deltron 3030 features a track named "National Movie Review" which is a brief, spoofed review of Strange Brew.