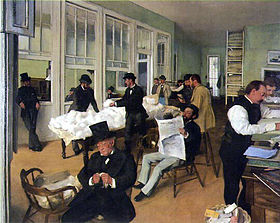 Cotton factors and others go about their business in The New Orleans Cotton Exchange by French painter Edgar Degas, 1873

In the antebellum South, most cotton planters relied on cotton factors (sometimes also called commission merchants) to sell their crops for them.

This factor was usually located in an urban center of commerce, such as Charleston, Mobile, New Orleans, or Savannah, where they could most efficiently tend to business matters for their rural clients. Prior to the American Civil War, the states of Alabama, Georgia, Louisiana, and Mississippi were producing more than half of the world's cotton, although Arkansas, Tennessee, and Texas produced large amounts also.[1] At the same time the port of New Orleans exported the most cotton, followed in second by Mobile.[2]

As one source notes,

The factor was a versatile man of business in an agrarian society who performed many different services for the planter in addition to selling his crops. He purchased or sold slaves for his client, arranged for the hiring of slaves or the placing of the planter's children in distant schools, gave advice concerning the condition of the market or the advisability of selling or withholding his crop, and bought for his client a large proportion of the plantation supplies.[3]

Not all factors in the antebellum south were cotton factors; some were factors of other commodities. In 1858, for example, New Orleans boasted sixty-three sugar and molasses factors (Louisiana produced large amounts of sugarcane), but it probably had an even greater number of cotton factors.[4]