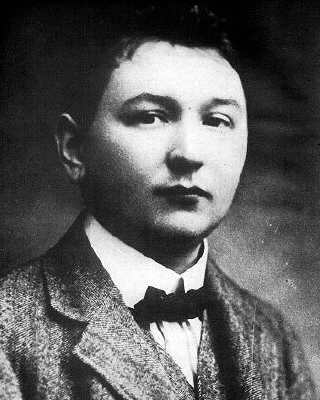 Jaroslav Hašek (IPA2|ˈjaroslaf ˈɦaʃɛk) (, –, ) was a Czech humorist and satirist best known for his world-famous "", an unfinished collection of farcical incidents about a soldier in , which has been translated into sixty languages. He also wrote some 1,500 short stories. He was a journalist, bohemian, and practical joker. His short life had many odd parallels with another Prague contemporary, the Jewish writer (1883–1924).

Hašek was born in , (then within , now the Czech Republic), the son of middle-school math teacher Josef Hašek and his wife Kateřina. Poverty forced the family, with three children—another son Bohuslav, three years Hašek's younger, and an orphan cousin Maria—to move often, more than ten times during his infancy. He never knew a real home, and this rootlessness clearly influenced his life of wanderlust. When he was thirteen, Hašek's father died from excessive alcohol intake, and his mother was unable to raise him firmly. The teenage boy dropped out of high school at the age of 15 to become a druggist, but eventually graduated from business school. He worked briefly as a bank officer and also as a dog salesman (a profession he was to attribute to his hero Švejk and from which many of the improbable anecdotes told by Švejk are drawn). He preferred, however, the liberated profession of a writer and journalist,though he had entered into the circles of gipsies and vagabonds,taking up many bad habits and becoming unruly and hard to track down.

In 1906 he joined the movement, having taken part in the 1897 anti-German riots in Prague as a schoolboy. He gave regular lectures to groups of workers and, in 1907, became the editor of the anarchist journal "". As a prominent anarchist, his movements were closely monitored by the police and he was arrested and imprisoned on a regular basis; his offenses include numerous cases of vandalism and at least one case of assaulting a police officer, for which he spent a month in prison.

Hašek met Jarmila Mayerová in 1907, and fell in love with her. However, due to his lifestyle, her parents found him an unsuitable match for their daughter. In response to this, Hašek attempted to back away from anarchism and get a settled job as a writer. When he was arrested for desecrating a flag in Prague, Mayerová's parents took her into the country, in hope that this would end their relationship. This move was unsuccessful in that it failed to end the affair, but it did result in Hašek's final withdrawal from anarchism and a renewed focus in writing. By 1909, he had sixty-four short stories published, over twice as many as in any previous year, and he was also named as the editor of the journal "The Animal World". This job did not last long, however, as he was soon dismissed for publishing articles about imaginary animals which he had dreamed up.

In 1910, he married Jarmila Mayerová. However the marriage was to prove an unhappy one, and lasted little more than three years (historian Jindřich Chalupecký has argued Hašek was Fact|date=June 2008; he also suffered from heavy melancholy). Mayerová went back to live with her parents in 1913 after he was caught trying to fake his own death. At the outbreak of , Hašek lived spasmodicallyClarifyme|date=March 2008 with cartoonist , who later illustrated the Good Soldier Svejk. Eventually he was drafted and joined the army; many of the characters in Švejk are based on people he met during the war. He did not spend long fighting in the front line, being captured by the Russians in 1915. He had a relatively easy time in the Russian s, he was assigned to the camp's commander as a secretary. He was allowed to leave the camp in 1916 to join the newly formed as a propaganda writer.

After the , he remained in Russia as a member of the party. During this time he also remarried (although he was still married to Jarmila). He eventually returned again to Prague in 1920 in the hope of finishing "The Good Soldier Švejk". However, he was not a popular figure upon his return, being branded a traitor and a bigamist, and struggled to find a publisher for his works.

Before the war, in 1912, he published the book "The Good Soldier Švejk and other strange stories" ("Dobrý voják Švejk a jiné podivné historky") where the figure of Švejk appeared for the first time but it was only after the war in his famous novel that Švejk became a "sancta simplicitas", a cheerful idiot who joked about the war as if it were a tavern brawl. By this time, Hašek had become gravely ill and dangerously overweight. He no longer wrote, but dictated the chapters of "Švejk" from his bedroom in village , where he unexpectedly died in 1923, at age 39, of contracted during the war.

* Since his death, all of Hašek's short stories have been collected and published in the Czech language.
* For decades (until 2000) a "Festival of humor and satire "Haškova Lipnice" had been held in Lipnice.