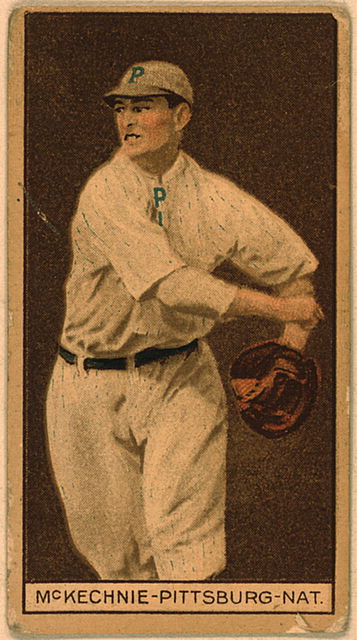 William Boyd McKechnie ( - ) was an American , manager and coach in . He was the first manager to win titles with two different teams (1925 and 1940 ), and remains one of only two managers to win pennants with three teams, also capturing the title in 1928 with the . His 1,892 career victories ranked fourth in major league history when he ended his managing career in 1946, and trailed only John McGraw's NL total of 2,669 in league history. He was nicknamed "Deacon" because he sang in his church choir and generally lived a quiet life.

McKechnie did not do as well with Boston as with the other NL teams, but he managed to finish "fourth or fifth with teams that should have been eighth," according to Lee Allen in "The National League Story" (1961). The only year in which the Braves did not even do moderately well during McKechnie's time as manager was in by|1935, when was with the team. Ruth's presence made it impossible, Allen says, for the manager to enforce discipline; the faded star drew a huge salary, and lived apart from the team on the road. He lasted only about a month and hit .181. The Braves won 38 games that year and lost 115, finishing dead last.

According to one baseball reference work, McKechnie had a poor sense of direction, which did not improve when, as the Reds' manager, he began traveling by plane. He arrived in an airport when the Reds were to play the Pirates at . He hailed a taxi and asked the driver to take him to the Schenley Hotel. "I never heard of it," said the driver. McKechnie gave him the names of the nearby streets. "Never heard of them either," the cabbie said. "How long have you been driving a cab here? the manager asked. "Twenty-five years and then some," said the driver, "But so help me I never heard of the Schenley Hotel! You must be in the wrong town! Where do you think you are?" "Pittsburgh," McKechnie said. "Pittsburgh, hell! retorted the driver. "You're really lost. This is !"

McKechnie was an unusual kind of manager for his era. A very religious man, he didn't smoke, didn't drink, and didn't use profanity. When he had a problem player who was likely to go out carousing, McKechnie's simple solution was to room with him.

After McKechnie ended his nine-year association with the Reds in 1946, he concluded his career with three seasons as the man of young manager . The Boudreau-McKechnie Indians won a in 1948.

The Pirates home, in Bradenton, is named after him.