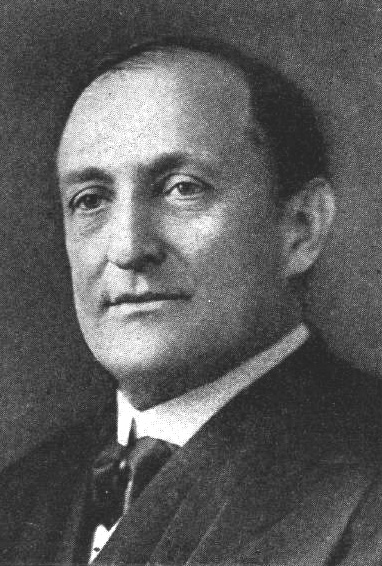 James Clark McReynolds (, &ndash;, ) was an American and who served both as under President and as an . McReynolds served on the Court from October 12, 1914 to his retirement on January 31, 1941, and was known for his conservative opinions opposing President 's New Deal legislation.

Born in , he graduated as from , in 1882 and attended the School of Law. He was secretary to Senator , who later became an associate justice himself. McReynolds practiced law in Nashville and served as Professor of Commercial Law, Insurance, & Corporations at , and ran unsuccessfully for Congress in 1896. Under he was Assistant Attorney General from 1903 to 1907, when he resigned to take up private practice in .

His fierce opposition in the face of Franklin Roosevelt's legislation to fight the led to his being labeled one of the "Four Horsemen", along with , and Pierce Butler. McReynolds despised Roosevelt; it is claimed that he said of Roosevelt, "I'll never resign (from the Court) as long as that crippled son-of-a-bitch is in the White House," an attribution which he never denied. [ [http://www.independent.org/pdf/tir/tir_09_1_3_shughart.pdf Bending Before the Storm:"The U.S. Supreme Court in Economic Crisis, 1935–1937"] , pg. 80, fn. 56]

McReynolds voted to strike down the , the and the , and continued to vote against New Deal measures after the Court's 1937 "switch" to upholding New Deal legislation. Professor Howard Ball called McReynolds "the most strident Court critic of Roosevelt's New Deal programs." [Ball, Howard. Hugo L. Black: Cold Steel Warrior. Oxford University Press. 2006. ISBN 0-19-507814-4. Page 89.] With the death of Butler in 1939, McReynolds was the last of the Four Horsemen on the bench.

When the Supreme Court Building opened in 1935, McReynolds, like most of the other Justices, refused to move his office from his apartment into the new building but continued to work out of the office he maintained at his apartment.

Despite his earlier claim (see above), he resigned from the court in 1941—with FDR still in the White House—and lived in , until his death there on August 24, 1946. He is buried in the Elkton Cemetery in .

Justice McReynolds wrote two early decisions using the to protect : "" ussc|262|390|1923, and "" ussc|268|510|1925. "Meyer" involved a state law that prohibited the teaching of modern foreign languages in public schools. Meyer, who taught German in a Lutheran school, was convicted under this law. McReynolds wrote that the liberty guaranteed by the Due Process Clause of the Fourteenth Amendment included an individual's right "to contract, to engage in any of the common occupations of life, to acquire useful knowledge, to marry, to establish a home and bring up children, to worship God according to the dictates of his conscience, and generally to enjoy privileges, essential to the orderly pursuit of happiness by free men". Thus the Due Process Clause of the Fourteenth Amendment was interpreted to mean that liberty means more than freedom from bodily restraint. State regulation of liberty must be reasonably related to a proper state objective. The legislature's view of reasonableness was subject to supervision by the courts.

"Pierce" involved a challenge to a law forbidding parents to send their children to any but public schools. Justice McReynolds wrote the opinion for a unanimous Court, holding that the Act violated the liberty of parents to direct the education of their children. McReynolds wrote that "the fundamental liberty upon which all governments in this Union repose excludes any general power of the State to standardize its children by forcing them to accept instruction from public teachers only."

McReynolds was also the author of the controversial decision in "" ussc|307|174|1939, which was the only Supreme Court case that directly involved the Second Amendment until "" in 2008.

In the field of tax law, McReynolds wrote for the Court in "Burnet v. Logan", 283 U.S. 404 (1931), a significant decision setting out the Court's doctrine regarding "open transactions."

McReynolds is widely considered one of the most unpleasant men to ever sit on the Court, being labeled "Scrooge" by Drew Pearson. [This is the title of the chapter dedicated to McReynolds in Drew Pearson and Robert S. Allen, "The Nine Old Men," Doubleday, Doran, and Company, Inc. NY, 1936.] Chief Justice Taft thought him selfish, prejudiced, "and someone who seems to delight in making others uncomfortable... He has a continual grouch, and is always offended because the court is doing something that he regards as undignified." [Letter from Taft to Horace Taft, Dec. 26, 1924; quoted in Henry F. Pringle, "The Life and Times of William Howard Taft. A Biography," Farrack and Rinehart, Inc., NY, 1939; vol. 2, p. 971.] [Arthur M. Schlesinger, Jr., "The Age of Roosevelt, volume 3: The Politics of Upheaval," Houghton Mifflin Co., Boston, 1960, p. 456.] Taft also wrote that McReynolds was the most irresponsible member of the Court, and that " [i] n the absence of McReynolds everything went smoothly." [Letter from Taft to Helen Taft Manning, June 11, 1923, quoted in "William Howard Taft: Chief Justice", by Alpheus Thomas Mason. Oldbourne, London, 1964, p. 215.]

Taft's dislike of McReynolds was not based on the latter's views of the Constitution and the law, which usually did not differ from the Chief Justice's. Taft wrote that although he considered McReynolds an "able man", he found him to be "selfish to the last degree... fuller of prejudice than any man I have ever known,... one who delights in making others uncomfortable. He has no sense of duty... really seems to have less of a loyal spirit to the Court than anybody." [Letter from Taft to Helen Taft Manning, June 11, 1923; Mason "op. cit.", pp. 215-216.] Addicted to vacations, in 1929 McReynolds asked Taft to announce opinions assigned to him (McReynolds), explaining that "an imperious voice has called me out of town. I don't think my sudden illness will prove fatal, but strange things some time happen around Thanksgiving." [Letter from J.C. McReynolds to Taft, Nov. 23, 1929, quoted in Mason, "op. cit.", p. 216.] Duck hunting season had opened and McReynolds was off to Maryland for some shooting. In 1925 he left so suddenly on a similar errand that he had no opportunity to notify the Chief Justice of his departure. Taft was infuriated: two important decisions he wanted to deliver were held up because McReynolds had not handed in a dissent before leaving. [Letter from William Howard Taft to R.A. Taft, Feb. 1, 1925, quoted in Mason, "op. cit.", p. 216.]

He would not accept "Jews, drinkers, blacks, women, smokers, married or engaged individuals as law clerks."

In 1922, Taft proposed that members of the Court accompany him to Philadelphia on a ceremonial occasion, but McReynolds refused to go, writing: "As you know, I am not always to be found when there is a Hebrew abroad. Therefore, my 'inability' to attend must not surprise you." [Letter from McReynolds to Taft, ca. Feb., 1922, quoted in Mason, "op. cit.", pp. 216-217.] McReynolds even refused to sit next to Brandeis (where he belonged on the basis of seniority) for the Court photograph in 1924. "The difficulty is with me and me alone," McReynolds wrote Taft. "I have absolutely refused to go through the bore of picture-taking again until there is a change in the Court, and maybe not even then." [Letter from McReynolds to Taft, ca. March 1924, quoted in Mason, "op. cit.", p. 217.] Taft capitulated, and no photograph was taken that year. [Letter from Taft to McReynolds, Mar. 28, 1924, quoted in Mason, "op. cit.", p. 217.]

McReynolds's hates included Justice , and his unpleasant manner towards Clarke is often blamed for the latter's premature resignation from the Court in 1922. [Pearson and Allen, "op. cit.", p. 225.] Here also McReynolds refused to sign the joint letter sent to Clarke on his resignation. In a letter, Taft commented that " [t] his is a fair sample of McReynolds's personal character and the difficulty of getting along with him." [Letter from Taft to R.A. Taft, Oct. 26, 1922, quoted in Mason, "op. cit.", p. 217.] Once, when another colleague, , remarked to him of an attorney's brief: "That was the dullest argument I ever heard in my life," McReynolds replied: "The only duller thing I can think of is to hear you read one of your opinions." [David Burner, "op. cit.", p. 2024.]

Nor was McReynolds's rudeness confined to colleagues on the Court. Once, when called before the chairman of the Golf Committee at the Chevy Chase club after complaints were filed against him, McReynolds said: "I've been a member of this club a good many years, and no one around here has ever shown me any courtesy, so I don't intend to show any to anyone else." The indignant chairman replied: "Mr Justice, you wouldn't be a member of this club if it wasn't for your official position. The members of this club have put up with your discourtesy for years, merely because you are a member of the Supreme Court. But I'm telling you now that the next time there is a complaint against you, you'll be suspended from the privileges of the golf course." [Pearson and Allen, "op. cit.", p. 226.] Justices Pierce Butler and transferred from the Chevy Chase club to Burning Tree because McReynolds "got disagreeable even beyond their endurance." [Pearson and Allen, "op. cit.", p. 131.]

He was also a confirmed misogynist. When a woman lawyer appeared in the courtroom, McReynolds would mutter: "I see the female is here again." He would often leave the bench when a woman lawyer rose to present a case. He thought the wearing of wrist watches by men to be effeminate, and the use of red fingernail polish by women to be vulgar. [David Burner, "op. cit.", p. 2024.]

In addition, he hated tobacco and forbade smoking in his presence. He is said to have been responsible for the "No Smoking" signs in the Supreme Court building, which was inaugurated during his tenure. [David Burner, "op. cit.", pp. 2023-2024.] He would announce to any Justice who attempted to smoke in Conference that "tobacco smoke is personally objectionable to me." Few Justices would try, and those who did "were stopped at the threshold." [William O. Douglas, "The Court Years 1939-1975. The Autobiography of William O. Douglas." Random House, NY, 1980, ISBN 0-394-49240-4, p. 13.]

However, there was a kind streak to McReynolds. He was "extremely charitable" to the pages who worked at the Court, [William O. Douglas, "op. cit.", p. 13.] and had a great love of children. For example, he gave very generous assistance and adopted thirty-three children who were victims of the German bombing of London in 1940, and left a sizable fortune to charity. [David Burner, "op. cit.", p. 2024.] When Oliver Wendell Holmes's wife died, McReynolds broke down and wept at her funeral. [Pearson and Allen, "op. cit.", p. 226.] Holmes wrote in 1926: "Poor McReynolds is, I think, a man of feeling and of more secret kindliness than he would get credit for." [David Burner, "op. cit.", p. 2024.] He would often entertain at his apartment, and even passed cigarettes to his guests on occasion. [William O. Douglas, "op. cit.", p. 13.] He often invited people for brunch on Sunday mornings. According to , " [o] n these informal occasions in his own home he was the essence of hospitality and a very delightful companion." [William O. Douglas, "op. cit.", p. 14.] Once, when riding to his office on a street car, a drunk got on board and fell out in the aisle. McReynolds picked him up, helped him back to his seat, and sat beside him until they reached the top of Capitol Hill, leaving him only after giving explicit instructions to the conductor. [Pearson and Allen, "op. cit.", pp. 226-227.] And when due to absence of more senior justices it fell on him to preside in court, "he was the soul of courtesy, graciously greeting and raptly listening to the arguments by lawyers of both sexes."