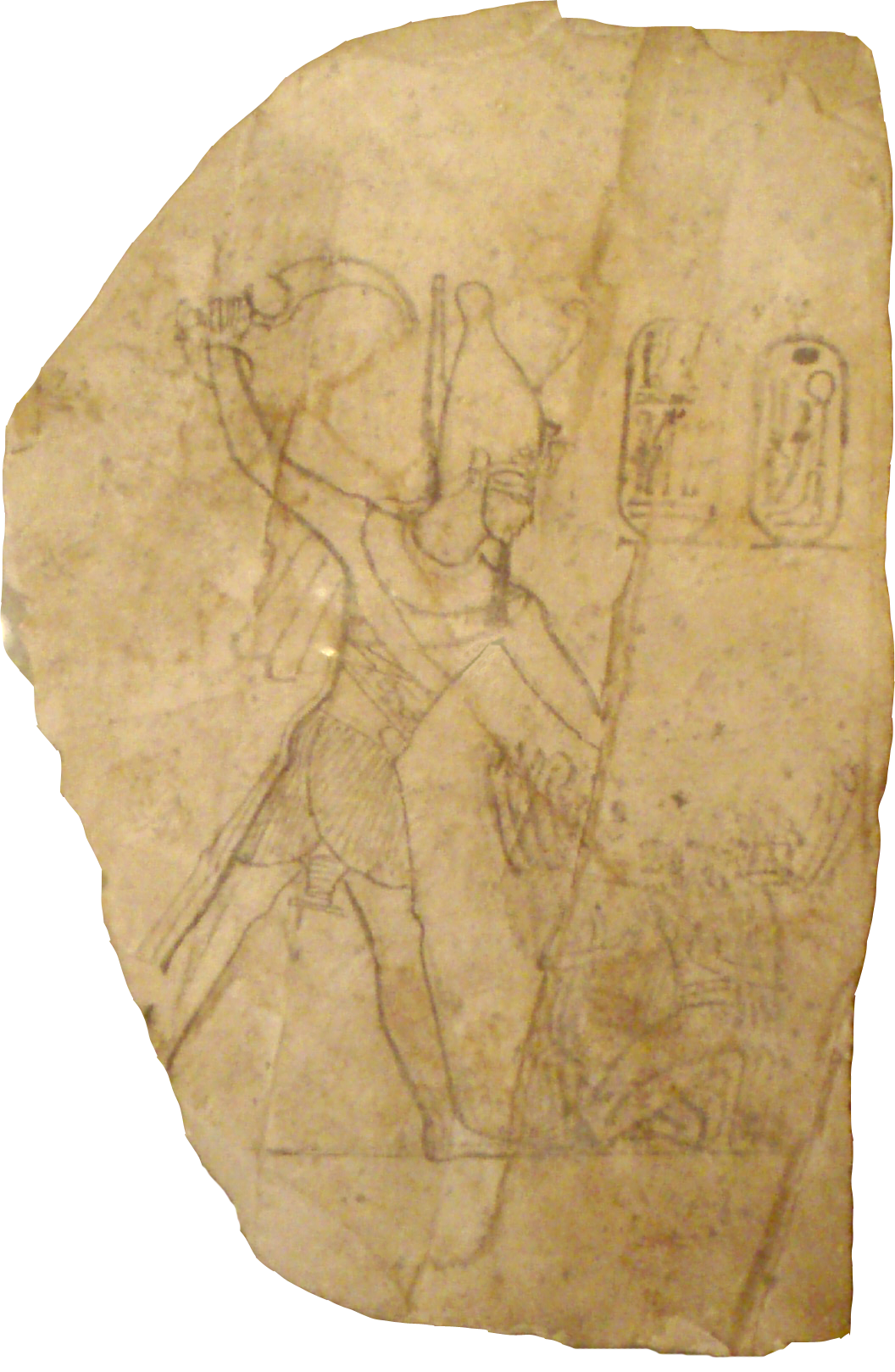 Heqamaatre Ramesses IV (also written Ramses or Rameses) was the third of the of the of . His name prior to assuming the crown was Amonhirkhopshef. He was the fifth son of and was appointed the crown prince by Year 22 of his father's reign when all four of his elder brothers predeceased him. [Jacobus Van Dijk, 'The Amarna Period and the later New Kingdom' in The Oxford History of Ancient Egypt, ed. Ian Shaw, Oxford University Press paperback, 2002, p.306] His promotion to crown prince:: 'is suggested by his appearance (suitably entitled) in a scene of the festival of Min at the Ramesses III temple at Karnak, which may have been completed by Year 22 [of his father's reign] . (the date is mentioned in the poem inscribed there)' [A. J. Peden, The Reign of Ramesses IV, Aris & Phillips Ltd, 1994. p.2]

Prince Ramesses IV employed three distinctive titles as his father's chosen successor: "Hereditary Prince", "Royal scribe" and "Generalissimo"; the latter two of his titles are mentioned in a text at Amenhotep III's temple at Soleb [KRI, V 372: 16] and all three royal titles are given in a now in Florence, Italy. [KRI, V, 373 (3)] Henceforth, he took on increasing responsibilities; for instance, in Year 27 of his father's reign, he is depicted appointing a certain Amenemopet to the important position of Third Prophet of Amun in the latter's TT 148 tomb. [G.A. Gaballa & K.A. Kitchen, "Amenemope, His Tomb and Family," MDAIK 37 (1981), pp.164-180] [ [http://touregypt.net/featurestories/ramessesiv.htm Ramesses IV] by J. Dunn] Amenemope's Theban tomb also accords prince Ramesses all three of his aforementioned sets of royal titles. [Gaballa & Kitchen, op. cit., pp.172-173 & 176-177] Due to the three decade long rule of Ramesses III, Ramesses IV is believed to have been a man in his forties when he took the throne. His rule has been dated to either 1151 to or 1155 to .

At the start of his reign, the pharaoh initiated a substantial building campaign program on the scale of by doubling the size of the work gangs at to a total of 120 men and dispatching numerous expeditions to the stone quarries of and the turquoise mines of the Sinai. [Van Dijk, op. cit., pp.306-307] The Great Rock stela of Ramesses IV at Wadi Hammamat records that the largest expedition--dated to his Year 3, third month of Shemu day 27--consisted of 8,368 men alone including 5,000 soldiers, 2,000 personnel of the Amun temples, 800 and 130 stonemasons and quarrymen under the personal command of the High Priest of Amun, . [KRI, VI, 12-14] The scribes who composed the text conscientiously noted that this figure excluded 900 men "who are dead and omitted from this list." [Peden, op. cit., p.89] Consequently, once this omitted figure is added to the tally of 8,368 men who survived the Year 3 quarry expedition, a total of 900 men out of an original expedition of 9,268 men perished during this massive endeavour "for a mortality rate of almost 10%". This gives an indication of the harshness of life in Egypt's stone quarries. Some of the stones dragged 60 miles to the Nile from Wadi Hammamat were 40 tons or more. [ Time Life Lost Civilizations series: Ramses II: Magnificence on the Nile (1993)p. 133 ] Other Egyptian quaries including were much closer to the Nile which enabled them to use barges to transport stones long distances.

Part of the king's program included the extensive enlargement of his father's Temple of Khonsu at and the construction of a large mortuary temple near the . Ramesses IV also sent several expeditions to the turquoise mines the Sinai; a total of four expeditions are known prior to his fourth year. The Serabit el-Khadim stela of the Royal Butler Sobekhotep states: "Year 3, third month of Shomu. His Majesty sent his favoured and beloved one, the confident of his lord, the Overseer of the Treasury of Silver and Gold, Chief of the Secrets of the august Palace, Sobekhotep, justified, to bring for him all that his heart desired of turquoise (on) "his fourth expedition"." [KRI, VI, 85-86] This expedition dates to either Ramesses III or IV's reign since Sobekhotep is attested in office until at least the reign of Ramesses V. [Peden, op. cit., p.28] Ramesses IV's final venture to the turquoise mines of the Sinai is documented by the stela of a senior army scribe named Panufer. Panufer states that this expedition's mission was both to procure turquoise and to establish a cult chapel of king Ramesses IV at the Hathor temple of . [PM, VIII, 347-365] The stela reads:: "Year 5, second month of Shomu [ie: summer] . The sending by His Majesty

While little is known regarding the route that the mining missions took from Egypt to Serabit el-Khadim in the Sinai, AJ Peden who wrote a biography of Ramesses IV's reign in 1994 states that there were "two obvious routes" to reach this site:: "The first was a straightforward march from a Delta base, such as Memphis, east south-east and then south into Sinai. Surviving a march in this inhospitable land would have presented formidable logistical obstacles, perhaps forcing an alternative route to be adopted. This would involve a departure from the Delta to a site near the modern port of Suez. From here they could have proceeded by boat to the ports of Abu Zenima or El-Markha on the west coast of the Sinai peninsula and from there it is a short journey inland of only a day or two to the actual site of Serabit el-Khadim." [Peden, op. cit., pp.28-29]

Ramesses IV is attested by his aforementioned building actvity at Wadi Hammamate and Serabit el-Khadim in the Sinai as well as several papyri and even one obelisk. The creation of a royal cult in the Temple of Hathor is known under his reign at Serabit el-Khadim in the while Papyrus Mallet (or P. Louvre 1050) dates to Years 3 and 4 of his reign. [Peden, op. cit., p.33] Papyrus Mallet is a six column text dealing partly with agricultural affairs; its first column lists the prices for various commodities between Year 31 of Ramesses III until Year 3 of Ramesses IV. [Peden, op. cit., p.72] The final four columns contain a memorandum of 2 letters composed by the Superintendent of Cattle of the Estate of Amen-Re, Bakenkhons, to several mid-level administrators and their subordinates. [Peden, op. cit., p.72] Meanwhile, surviving monuments of Ramesses IV in the Delta consists of an obelisk recovered in Cairo and a pair of his cartouches found on a pylon gateway both originally from . [Peden, op. cit., p.33]

The most important document to survive from this pharaoh's rule is , which honours the life of his father, Ramesses III, by listing the latter's many accomplishments and gifts to the temples of , and the , the earliest known . Ramesses IV was perhaps the last New Kingdom king to engage in large-scale monumental building after his father as "there was a marked decline in temple building even during the longer reigns of Ramesses IX and VI. The only apparent exception was the attempt of Ramesses V and VI to continue the vast and uncompleted mortuary temple of Ramesses IV at the Assasif." [Peden, op. cit., p.81]

Despite Ramesses IV's many endeavours for the gods and his prayer to Osiris&mdash;preserved on a Year 4 stela at Abydos&mdash;that "thou shalt give me the great age with a long reign [as my predecessor] ", the king did not live long enough to accomplish his ambitious goals. [Clayton, Chronicle, p.167]

After a short reign of about six and a half years, Ramesses IV died and was buried in tomb in the . His mummy was found in the royal cache of Amenhotep II's tomb in 1898. [Clayton, Chronicle, p.167] His chief wife is Queen or Tentopet who was buried in . His son, , would succeed him to the throne. [Van Dijk, op. cit., p.307]