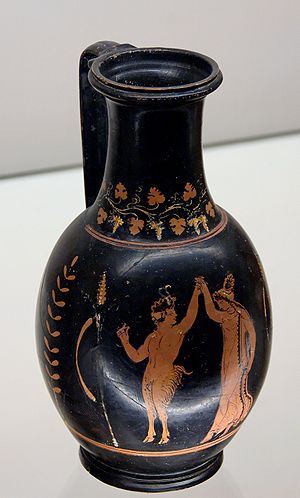 Greek dance is a very old tradition, being referred to by authors such as Plato, Aristotle, Plutarch and Lucian.[1] There are different styles and interpretations from all of the islands and surrounding mainland areas. Each region formed its own choreography and style to fit in with their own ways. For example, island dances have more of a "watery" flow to them, while Pontic dancing closer to Black Sea, is very sharp. There are over 4000 traditional dances that come from all regions of Greece. There are also Pan Hellenic dances, which have been adopted throughout the Greek world. These include the tsamikos, syrtos, and Kalamatianos.

Traditional Greek dancing has a primarily social function. It brings the community together at key points of the year, such as Easter, the grape harvest or patronal festivals; and at key points in the lives of individuals and families, such as weddings. For this reason, tradition frequently dictates a strict order in the arrangement of the dancers, for example, by age. Visitors tempted to join in a celebration should be careful not to violate these arrangements, in which the prestige of the individual villagers may be embodied.[2]

Dora Stratou, Lykeion ton Ellinidon, Horeftikos Omilos Thessalonikis and many other professional groups exist around the world. Each consists of children and adults who continue to perform traditional dances to support the culture.

The dances of the Peloponnese are very simple and heavy, with the leader of the line improvising.

Thracian dance is generally skippy and light. In most Thracian dances, the men are only permitted to dance at the front of the line. Musicians and singers such as Hronis Aithonidis and Kariofilis Doitsidis have brought to life the music of Thrace.

The Dances of (Northern Thrace) are fast, upbeat and similar to the Thracian style of dance. Dances from the town of Kavakli and Neo Monastiri are the most popular.

Dances in Macedonia vary. Most are solid and are performed using heavy steps, whilst others are fast and agile. Most dances begin slow and increase in speed. Western Macedonia

Dances in Thessaly are similar in style to the dances of Epirus. Mostly heavy, and some are fast. The leader, however, improvises, just like those in the Peloponnese.

Epirote dances are the most slow and heavy in all of Greece. Great balance is required in order to perform these dances.

Just like Crete, the Greek Islands have dances which are fast in pace and light and jumpy. Many of these dances, however, are couples dances, and not so much in lines.

These dances are light and jumpy, and extremely cardiovascular.

The Dances of the Pontic Greeks from the Black Sea, are amazing dances that were mostly performed by pontian soldiers in order to motivate themselves before going into a battle. The dances are accompanied by the Pontian Lyra also called the Kemenche by Turkish people. See Horon page for more information on the history of these dances.